This has become a post trip tradition on this blog, where we go through all the random food items that we tried throughout our trip.  These are not full meals at restaurants, those we review more in depth and separately. These are one off snacks or drinks or whatever, usually from quick service restaurants or kiosks.  Lets see what random stuff we had on this trip! 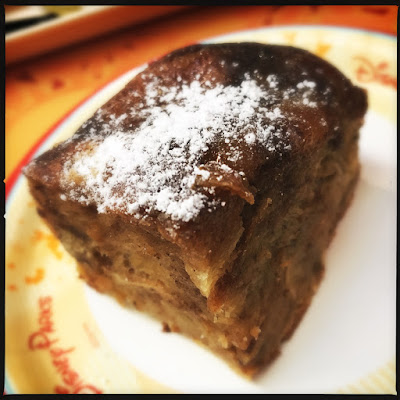 We were VERY upset earlier this year when Sunshine Seasons got rid of our beloved blueberry croissant bread pudding. When we saw that they recently added a french toast bread pudding to the breakfast menu we were cautiously optimistic.
While this is a decent option it isn't anywhere near the caliber of its predecessor.  It is really tasty and full of cinnamon, but entirely too too dense.  I was full after a couple bites. 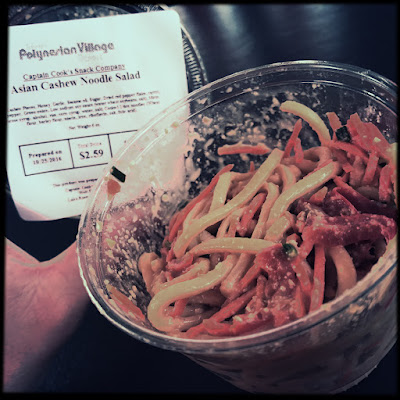 You guys. You guys. You guys. Above is a picture of the Asian cashew noodle salad which is a "grab and go" side dish item found at Captain Cooks at the Polynesian Village Resort. It was the single best thing I ate on this trip...and I think I ate ten of them.  At $2.59 you can make the most inexpensive meal anywhere. YUUUUUM. 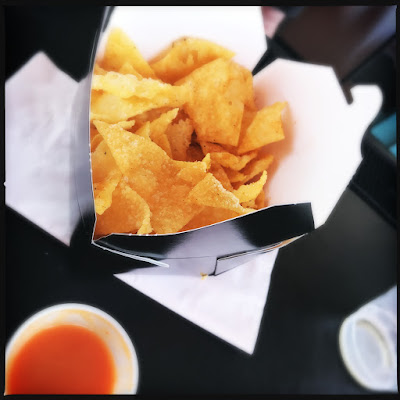 Also at the Polynesian are the fried wontons with spicy duck sauce.  These are available at the Oasis pool bar, which is lovely, along with some other small dishes.  These are spiced with something similar to Old Bay seasoning, and absolutely delicious.  The sauce is ok too, but like most things at Disney are not in fact spicy at all.  Perfect snack to enjoy with your beer. 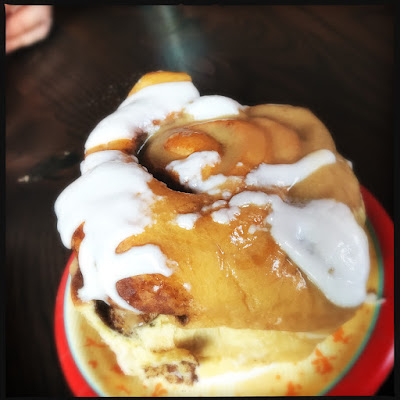 We stopped by Gaston's Tavern on one of our Magic Kingdom mornings.  We're not big breakfast people in general so it makes sense that we had never tried this before...in fact we rarely even go into Gaston's ever since the allure of LaFou's brew waned. This maple cinnamon roll was very good indeed, and I am obsessed with the maple sauce throughout.  Had we not been totally busy running from attraction to attraction I would have loved to sit and enjoy this with coffee. 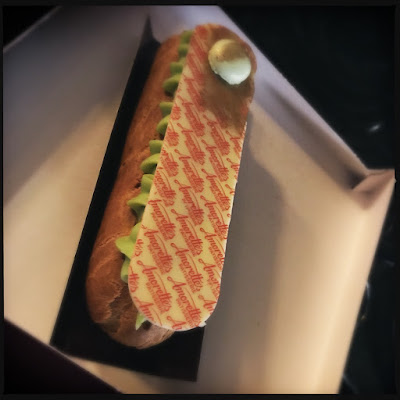 On this trip we finally broke our "Disney Springs cherry" and toured the area extensively after avoiding it for the last four years.  We have a lot to say about it in general, but we will save that for the podcast.  One thing that was a major disappointment was the pistachio eclair from Amorette's.  Just like everything baked here, it was gorgeous, but failed to deliver taste wise.  The one exception for me was the signature chocolate chip cookie which was amazing. (Adam begs to differ, and didn't care for the cookie but he is dumb.) 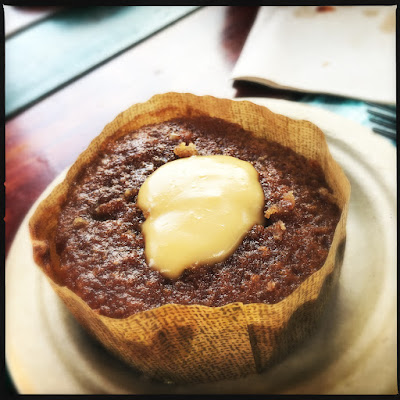 Here is another snack that we were quite skeptical about.  Replacing the delicious milk tart at Harambe Market, the warm malva spice cake is every bit as good as the previous dessert.  Malva cake is a traditional South African dessert made with apricot jam and spice.  This version isnt too sweet at all, and has a sort of cream cheese topping that was excellent.  Two thumbs up.

So those are but a few of the random things that we ate on this trip. I held back on sharing them all, as I may do more in depth reviews in the next few weeks.  I can say one thing: overall, we ate VERY VERY well on this trip. Now time to go to they gym.