Our recent cruise on the Disney Fantasy included one of eight Star Wars Day At Sea days.  We had booked this cruise prior to the announcement of the inclusion of the Star Wars day...and were neither perturbed or particularly excited about the idea.  We like Star Wars, but the idea was just meh to us.      The day included special shows, fireworks, meet and greets, and plenty of themed food.  As a part of your regular rotational dining schedule, there was a special menu that accompanied all three main dining rooms. 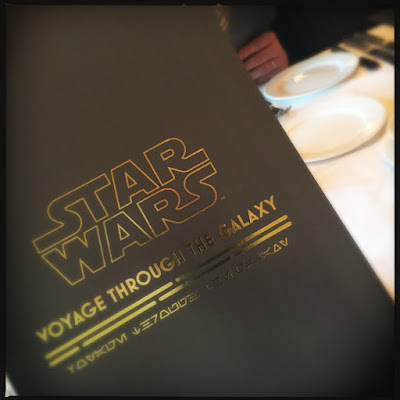 We are very conflicted about Disney Cruise Line food.  There are instances where it is very good (Palo/Remy), instances where it is good in a bad for you way (Cabanas), and then there are the three main dining rooms...where the good dishes are very few and far between.  This was also the case for this special themed menu.
A little info:  This menu is available in all three main dining rooms on the night of Star Wars Day At Sea, and does not vary from restaurant to restaurant.   And though it was fun and ridiculous, the only real theming came in the names of the dishes themselves.   Adam and I ordered everything vegetarian on the menu...lets dive it. 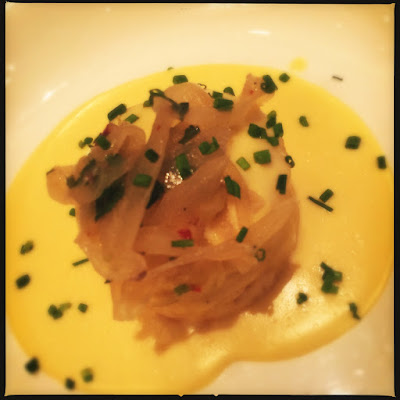 Our appetizers were the Padme Amidala Souffle (above) and the Lars Homestead Garden Salad (below).  First of all, why the hell do these have to have Star Wars themed names?  They didn't even try to theme these dishes in the slightest.
Adam would be quick to point out that the "souffle" was in fact a chewy corn cake, and rather disgusting.  I understand that in a large capacity dining room like this that a souffle would be hard to pull off.  HOWEVER, they would be much better off just calling it something else, instead of trying to sound fancy.  THIS THING WASN'T A SOUFFLE.
The salad was totally fine, and did have raisins and cashews which I liked a lot, and was a decent change of pace from the salads we have had on the ship previously.  And bonus! They remembered to dress the salad! 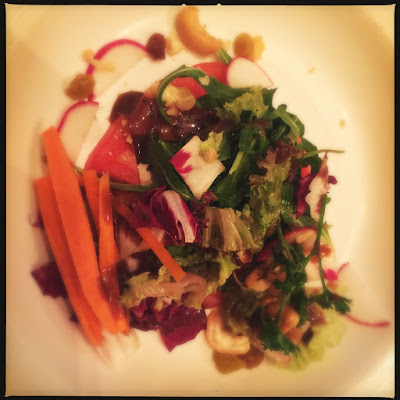 Now for the surprise! A dish I actually really enjoyed.  For my entree I ordered the Obi-Wan Shroom Steak.  Again, I think the name is really stupid, and a desperate attempt to theme a meal.  But this was a really decent option amidst all the heavier meat dishes.  Described as portobello mushroom katsu on sticky rice with curry and green onions.  The mushrooms were breaded in panko and fried, and had a wonderful crunch to them, and were very lightly seasoned.  Luckily the curry was full of flavor, and was neither Indian or Thai style curry, but actually closer to a Chinese curry in taste.  I really enjoyed this dish a lot. 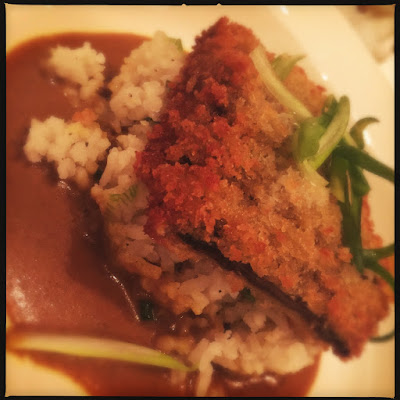 Adam got the Stormtrooper Flatbread.  Which came with caramelized onion, brie, walnuts, peaches, and spinach, drizzled with olive oil and balsamic, and topped with arugula.  I was lucky enough not to sample this atrocity...but Adam said it tasted like "a bad cracker with half cooked fruit on it."  Disney has a pretty bad track record with this style of flatbread, and I'm not all that shocked at the execution of this. 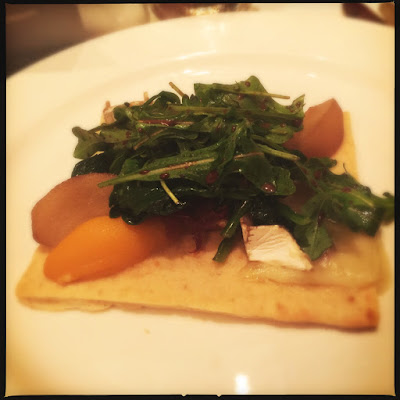 A bright side of the meal were the yummy and ridiculous desserts.  Adam ordered the Han Solo Frozen In Carbonite Sundae, and I got the Princess Leia's Warm Apricot Pudding.  I know that sounds like a joke, but that is ACTUALLY WHAT ITS CALLED. 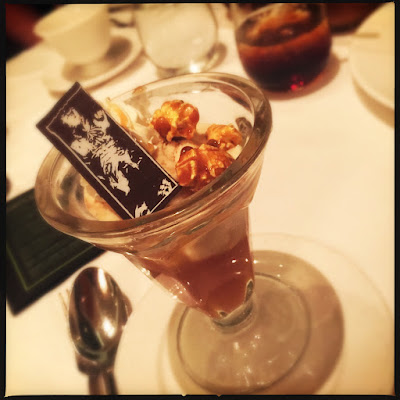 The sundae consisted of vanilla and dulce de leche ice cream with caramel corn and whipped cream.  Adam really loved this dessert. I mean, how could they go wrong with this? The idea of putting caramel corn on a sundae is borderline genius.
While my dessert was very basic, and merely ok, I did enjoy the fact that it was actually themed to the namesake character.  Using the crisps as a nod to Princess Leia's signature hairstyle was a great way to incorporate the theme. 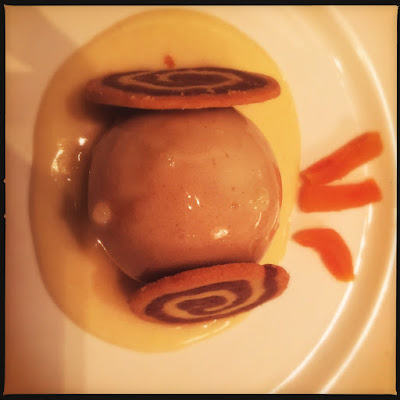 Overall this was an entirely forgettable meal, and ranks snuggly among the other rotational dining menus we have had.  They are all very boring, and exceedingly bland.  Luckily the mushroom dish saved this one for me, so our Star Wars Day At Sea meal wasn't a complete wash.  But I still recommend either Palo of Remy over the rotational restaurants any day of the week.