We don't dine in the Magic Kingdom too often.  Our favorite restaurants are scattered across property, but rarely fall in this park.  Yes, there are exceptions, among them Columbia Harbor House and the vastly under rated Crystal Palace...but thats about it honestly.
In the spirit of good blogging we always try a few restaurants that we've never been to, or in this case one that we haven't been to in years.  Lets head to the end of Main Street USA and visit the Plaza Restaurant... 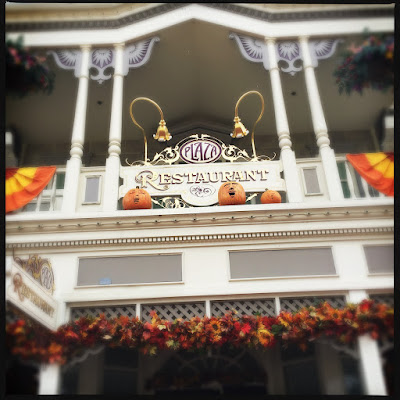 Though the Plaza straddles the line between Main Street and Tomorrowland, the theming is distinctly Main Street.  This restaurant blends seamlessly with the rest of the area.  Expect lots of over the top Victorian architecture, with plenty of  art nouveau flourishes for good measure. 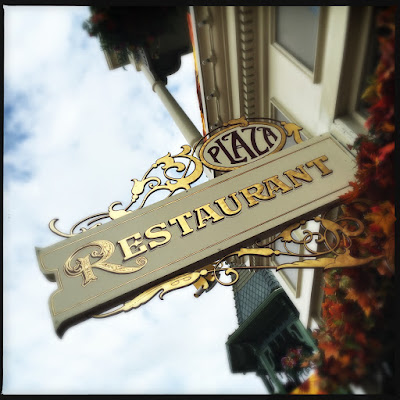 This restaurant is super small, and is comprised of two tiny dining rooms.  Of the two dining rooms the atrium, with all its natural light, is preferred.  But when we say small, we mean SMALL.  The interior is subdued and cozy, with lots of soft color and lighting.  Nothing garish here, but also nothing all that special. 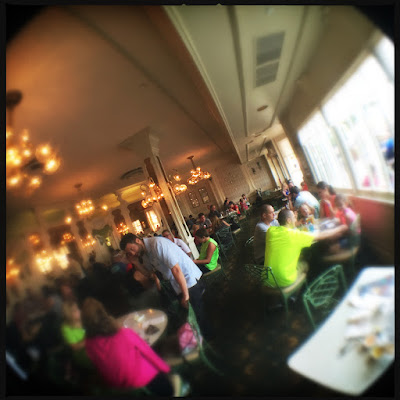 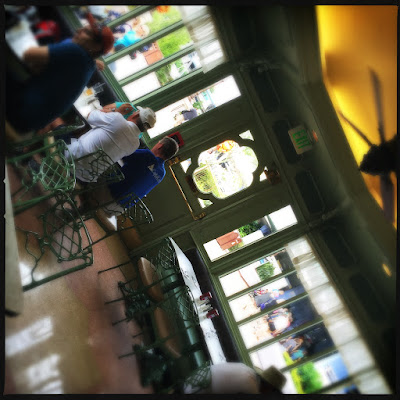 The menu here is pretty ambiguous too, and holds the distinction of having some of the most basic offerings on property.  Consisting molting of various random sandwiches, in addition to a meatloaf meal and a chicken salad.  But lets ignore that and focus on the face that the Plaza has TWO veggie options, which is basically unheard of. 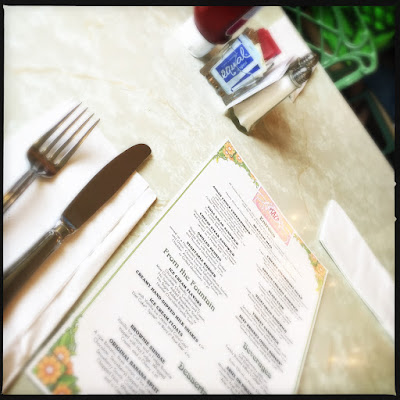 I had the vegetarian sandwich, which is described as fresh mozzarella, hummus, basil pesto, cucumber, roasted red pepper, tomato, and lettuce on a freshly baked foccaccia.  Think about that description for a second.  Nothing on this sandwich is offensive. These are all ingredients thatI love. The flavors were all fresh, and meshed well.  If I could complain about anything its that the bread is on the dry side.  No big deal really.  The broccoli slaw on the side of the sandwich is the exact same as that served at Columbia Harbor House...which is very good.
I also ordered a side of red skinned garlic mashed potatoes after seeing them on someones meatloaf plate.  It is not listed on the menu as a side option, but our server was happy to provide it.  They were basic and pasty.  Sometimes bad mashed potatoes really hit the spot. 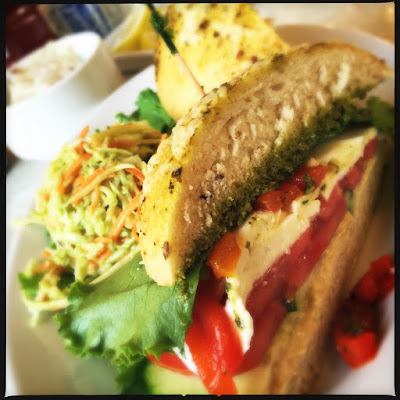 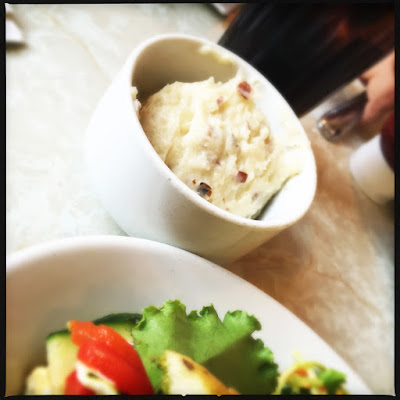 Adam ordered the veggie burger which is served with lettuce and tomato on the side, but also has some additional topping choices.  American cheese, cheddar cheese, sautéed mushrooms, and grilled onions.  Nothing crazy of course, but nice to dress it up a bit.
We are both quick to note that this is the same veggie patty used throughout Walt Disney World for years.  It is nothing more, and nothing less than an average veggie burger.  However, with the menu change at Pecos Bills last month this is the new "go to spot" for veggie burgers in the Magic Kingdom. 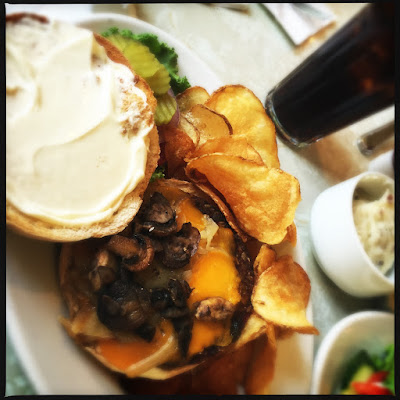 The Plaza Restaurant is nothing special.  The novelty of eating (kind of...) on Main Street is great, but nothing compared to Carnation Cafe at Disneyland. This restaurant remains a very safe bet for picky eaters, or those wanting and good sandwich.  You might be thinking "but guys! You're not picky eaters...why did you eat at the Plaza anyway?" Well friend, THE PLAZA IS VERY VERY INEXPENSIVE.  Not just compared to WDW, but compared to real life as well, especially when cocktailed with your Tables In Wonderland Card.   So it might be worth considering if you're on a tight budget but want to enjoy a few sit down restaurants.  Definitely worth trying at least once. :)