Our annual fall trip is approaching rapidly...and I basically spend all day dreaming about Walt Disney World, more specifically dreaming about Animal Kingdom.  It has been quite a while since we last visited the beloved theme park and I couldn't be more excited to spend some time within her berm.  Though the park hours tend to be on the early side every once in while DAK is open later than usual, allowing guests time to enjoy the gorgeous hours around dusk.
Here is a random melange of photos from recent trips, celebrating that most photogenic of theme parks at the twilight hour. 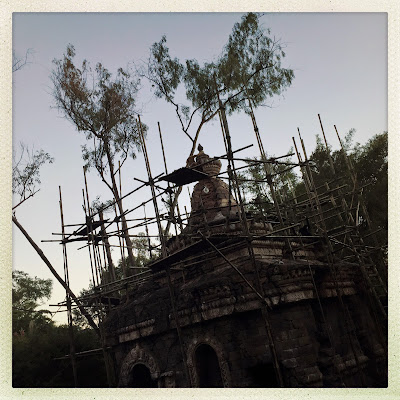 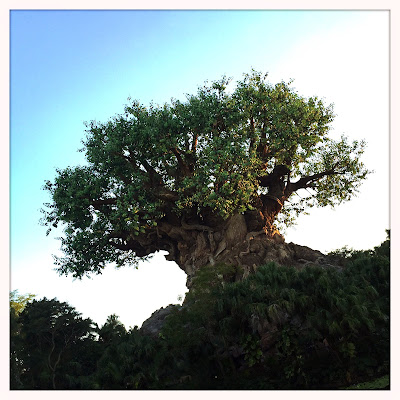 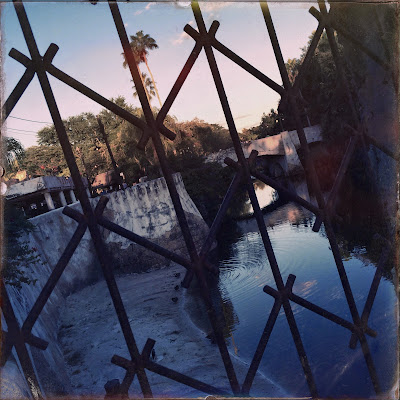 This past May, on our big trip to Disneyland, Adam and I only tried a few new restaurants.  The park is already so full of favorites that its hard to narrow down a few new experiences.  Among the new places we tried was Carnation Cafe. 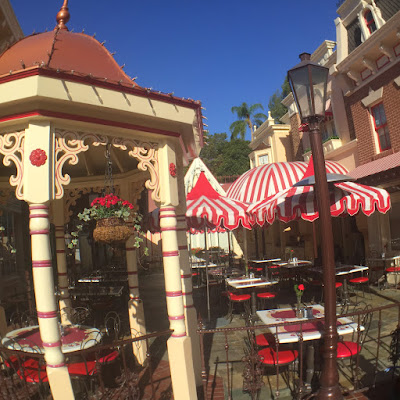 Carnation Cafe is a vital part of Disneyland.  This small restaurant has been operating since the parks opening day, and its presence on Main Street USA is as important as any attraction.  It's classic red and white motif is as charming as the carnations found on each bistro style table.  Although a recent renovation has added indoor seating, the main draw here is al fresco seating along Main Street. 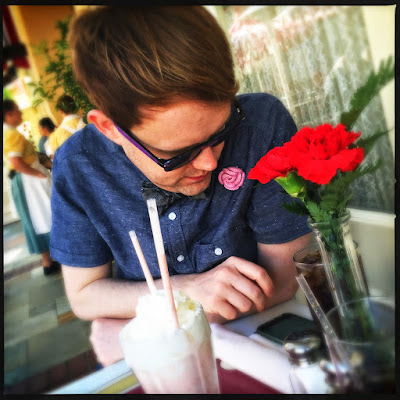 The staff at Carnation Cafe are super friendly, and have a sincere love for and knowledge of Disneyland.  The hostess who walked us to our table informed us of firework, parade, and Fantasmic showtimes...completely unprompted, which I loved.
The Cafe is open for breakfast, lunch and dinner, and serves a menu that is diverse and vaguely american.  The problem is, sometimes diverse, vaguely american food is well...meh...vague and not that great. 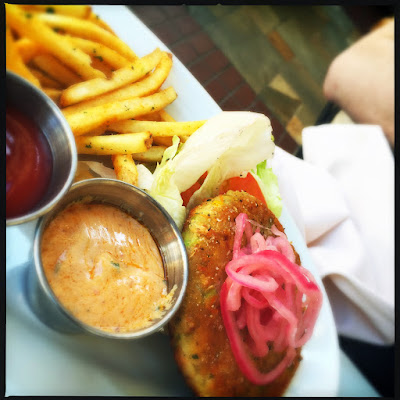 Lets talk about something real quick.  Disney Parks has an epidemic of massive proportion.  No, I'm not talking about Frozen, or selfie sticks...I'm talking house made veggie burgers.   These patties have been replacing the standard veggie patties that have been prevalent in Disney parks for years.  The problem is?  They're pretty bland, taste wise...and have NO DISCERNIBLE PROTEIN.  These are mostly made of potato and other starches. Meh.  Imagine eating potatoes on bread.  In theory, yes, its delicious. However the implementation is dreadful.   This is a burger we didn't finish. 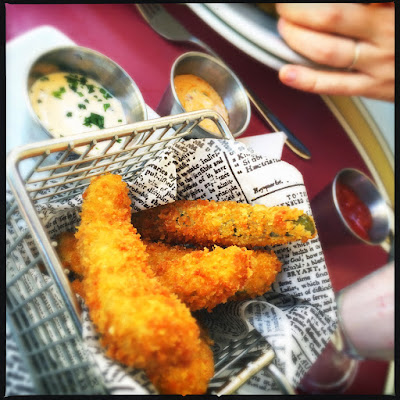 Faithful readers...we're at that two week mark of no blogging.  This is, I think, the magic number in which guests new to the blog might say "hmm...this isn't a very active source of enjoyment" and then move on.  So, in lieu of losing potential friends here is a post.
For those paying attention you would remember that we have a pretty good reason for this inactivity.  Our move to a bigger house has proved very exciting, crazy, and needlessly exhausting.  We had over 170 boxes filled to the brim (who knew we had so many damn books!?!?) and while we're making headway into settling in, it has taken a toll on the things we love...namely our health and our activity in the Disney community. For the record, when I say our health I mostly mean substituting tacos for every meal, so I'm ok with it.
Inevitably the excitement of this move will wane and my attention will drift back to Disney blogging and general snarkiness will abound.  Im not sure when I will get back in the "groove," it could very well be this upcoming week.  The fact that I'm taking the time to write this is a pretty good sign.
In the mean time here are a few random Disney pictures that are making me happy on this beautiful morning. 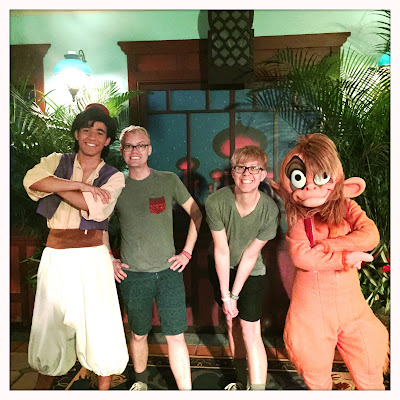 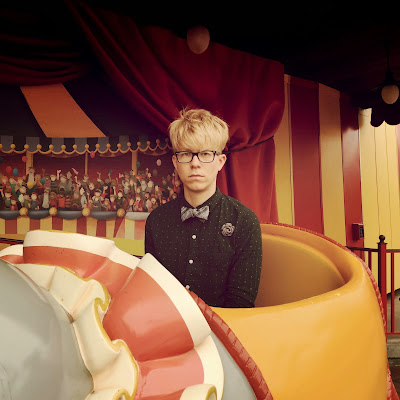 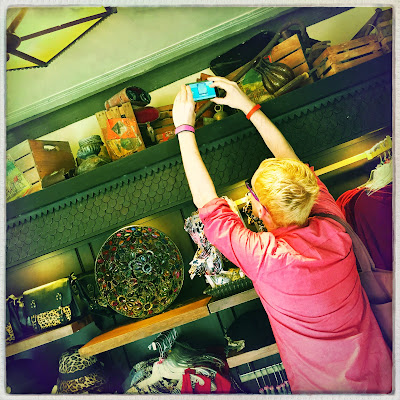 Oh What Am I To Do At Disney's Hollywood Studios?

Disney's Hollywood Studios has become a joke in many circles...including the Disney Hipster Melange.  This park has always been the bottom of our list as far as US parks are concerned...in fact, I'd rate both Universal Orlando parks above DHS.  However unloved this park has been in the past, NOTHING compares to the mere shell of a park it has become recently.
Years of neglect has left the studios completely void of legit entertainment, with only the most vague of theming. On top of that recent months DHS has seen the closure of the backlot tour, Legend of Captain Jack Sparrow,  and The American Idol Experience.  With news this week that the always popular Magic Of Disney Animation will close later this summer, it begs the question...Oh what am I to do at Disney's Hollywood Studios?
The fact is, despite all the public mocking, we still make it to Hollywood Studios a few times each trip.  Here are a few things about DHS that will keep us coming back, despite its general suckiness... 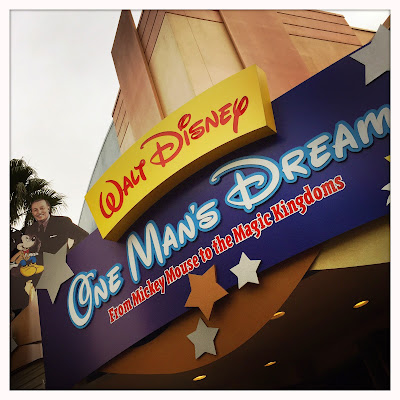 Rumors are already circulation about the imminent closure of One Man's Dream...but until that day comes this remains a huge highlight at DHS.  I could easily spend an hour enjoying the air-conditioned, history laden rooms.  Touring this attraction is still a must do for every trip, as it puts the whole of your vacation into perspective. 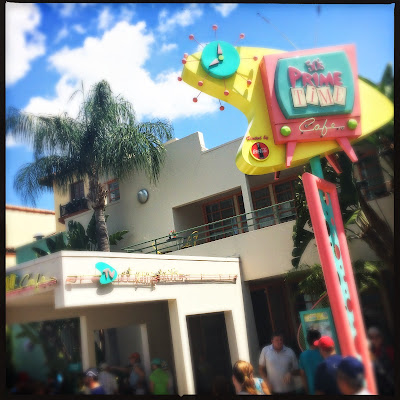 Obviously, with the park in its current condition, you'll want to be drinking.  Our watering hole of choice is the Tune In Lounge. This over  the top, perfectly themed bar is part of the waiting room for 50's Prime Time Cafe. You can usually find a seat at the bar with little to no wait, especially if you arrive earlier in the day.  The drinks are standard Disney bar menu...with an ok selection of beer and wine.  However, the real treat here is that you can order the full 50's Prime Time menu.  Our favorites are the peanut butter and jelly milkshake, and onion rings.  Pair this with beer, and I'm in vacationers heaven. 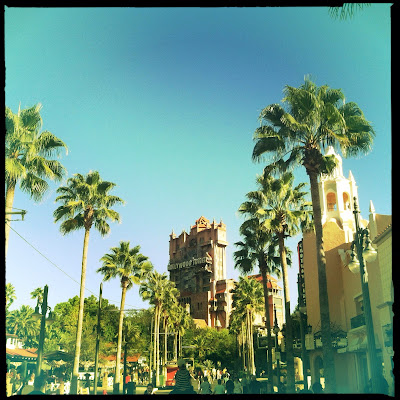 Whether you enjoy the stomach piercing drops of Tower Of Terror or not, there is no disputing that this e-ticket attraction is a huge asset to DHS.  Even disregarding the attraction itself, the eerie cast it lays on Sunset Boulevard is phenomenal...and adds to the overall feel of the park. 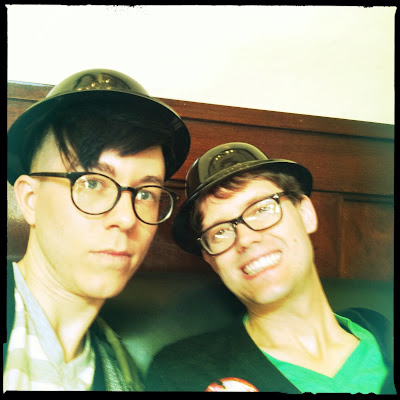 If you're not already stuffed full of peanut butter and jelly milkshake, you might want to head over to Brown Derby.  This signature restaurant provides the best food in the park, even for vegetarians.  Though it doesn't have an actual bar, the drinks here are delicious, and unique to the space.  If you're SUPER LUCKY you may even get picked as the celebrities of the day... 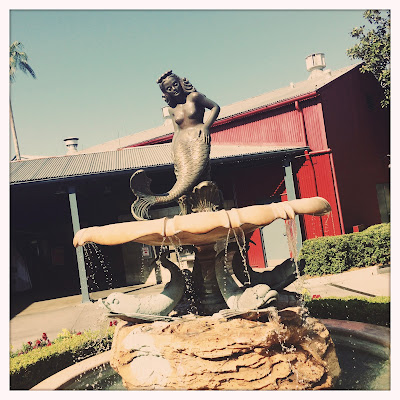 There may only be a few attractions at Hollywood Studios, but the park makes up for it in detail.  Remnants of the original "working studio" theme remain, often in the most remote corners.  Don't forget to take the time, drink in hand, to explore these corners.

This park might be in dire shape at the moment, but there is still plenty to do here to round out an awesome trip to Walt Disney World.  I mean, who wouldn't want to spend the afternoon drinking milkshakes, reveling in Disney history, and riding Tower of Terror? Sounds like a nice few hours to me.  Please keep in mind that this park is very much in flux at the moment, and any number of things could close at a moments notice. So sheesh, no promises.