What We Did With Ten Hours At Disney World

Prior to our recent Disney Cruise we often played hypothetical question on our various social media outlets. (You do follow us on Twitter, right?) Asking the question, What would you do if you only had ten hours at Walt Disney World? Knowing that we would be faced with this predicament. The answers were as varied as you can imagine, so in the end our crowd sourcing was of help, albeit very little.  As our cruise ended and the day approached I definitely didn't feel prepared.  This was after all the last time I'd be at Disney World until our annual blowout in October, so I had to make it count. (rest assured in the fact that we are going to Disneyland in May...)  Here is a recap of how we spent our day. 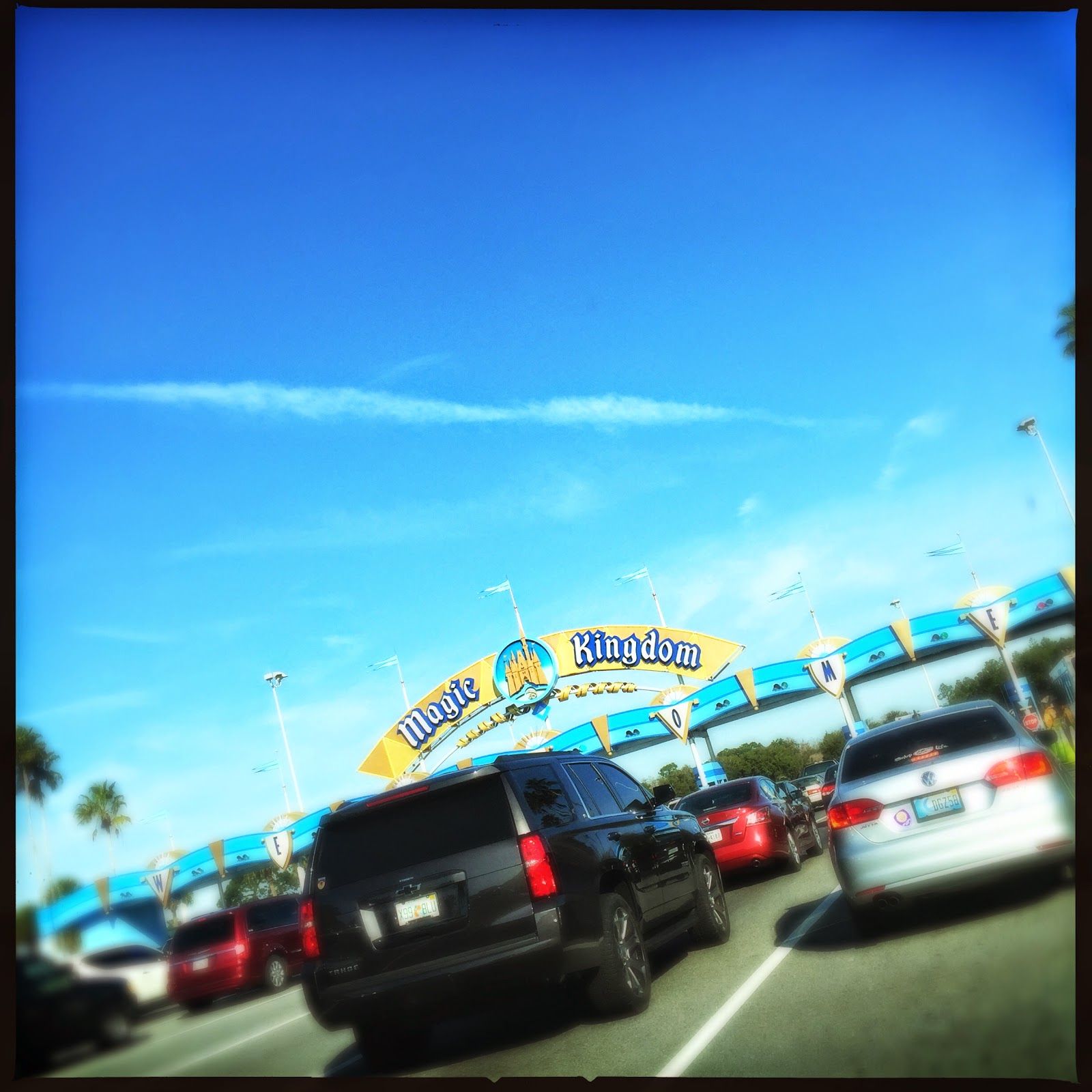 The day started off with lines...not at Disney World, but on the ship. Waiting to disembark then waiting to go through customs, then waiting for a rental car.  I wasn't happy.  I was pretty sure that all this waiting was going to throw off my ten hour game quite a bit, and with such a short time frame I really had to make each moment count.  Regardless of these setbacks and Adam's reckless driving we actually made it to our destination by 10:15 or so which is perfect because we had Peter Pan's Flight fast passes at 10:30.  First stop?  Adventureland egg roll cart... 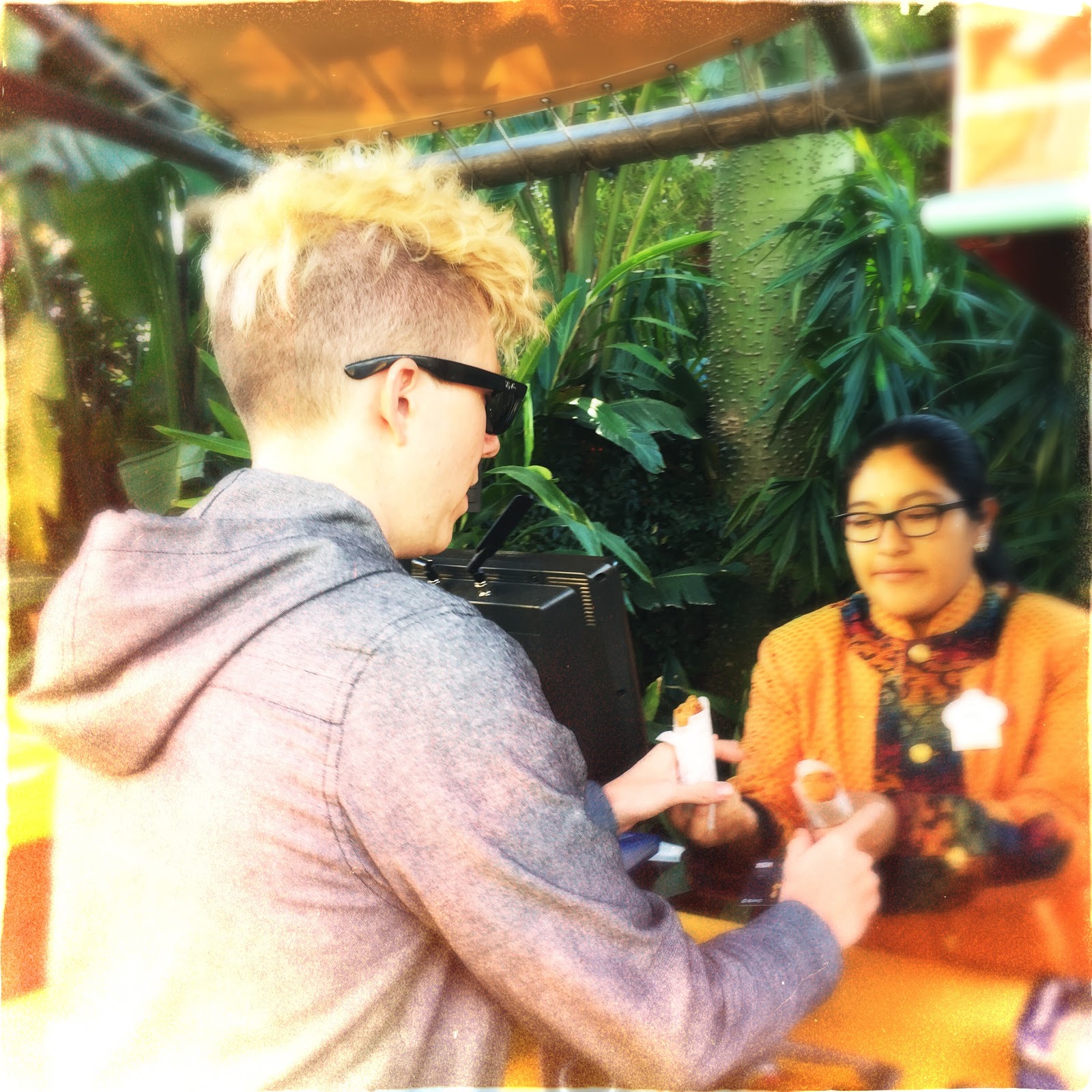 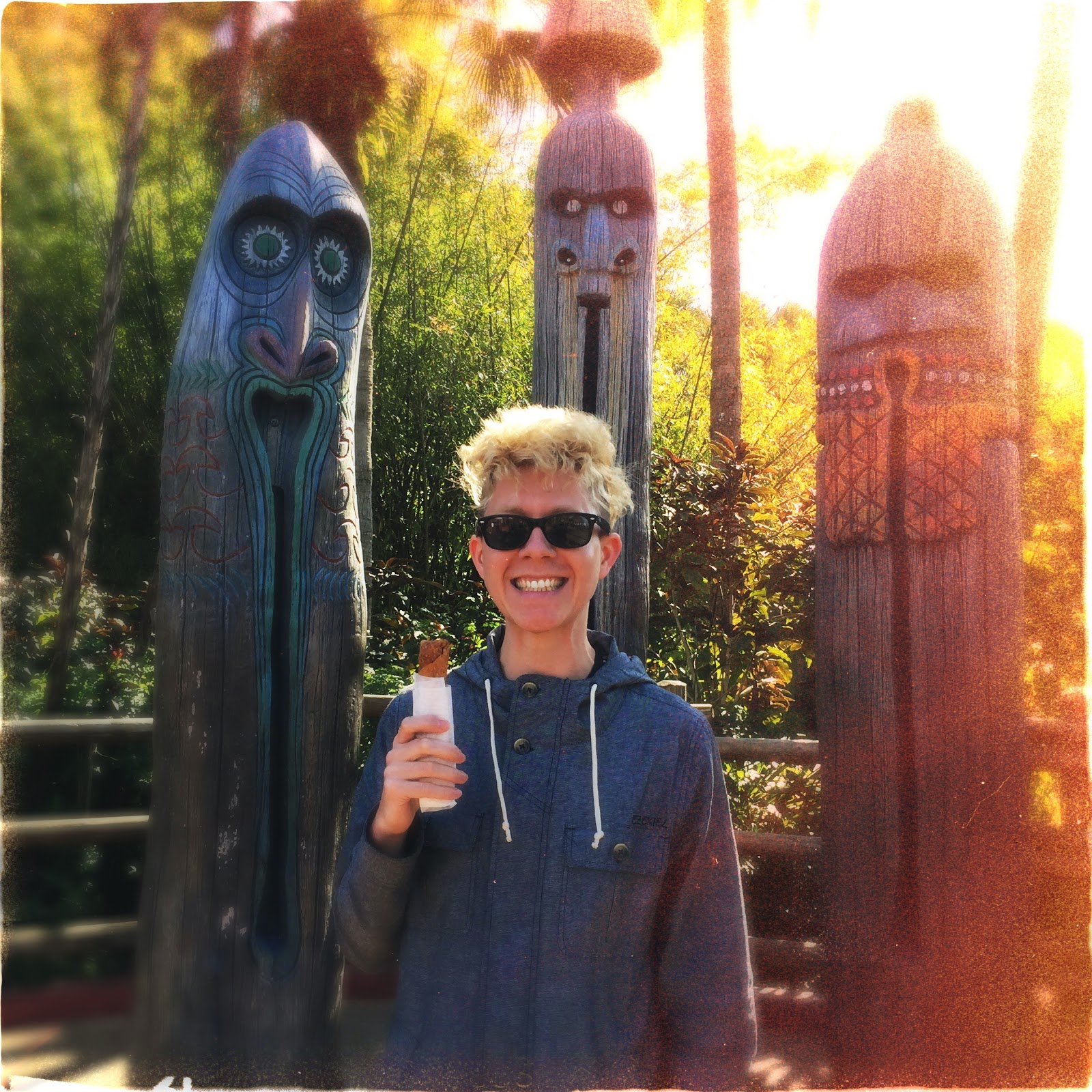 I know that these are not mind blowing egg rolls by any stretch of the imagination, but I have a sentimental attachment to them.  I ended up eating two actually while Adam had his favorite pina colada slush from Sunshine Tree Terrace.  I was definitely getting in the spirit of this silly visit, but my instinct is to take a million pictures and forget to have fun...luckily Adam wasn't having it and made me slow down and meander. After such a relaxing seven days on the ship, why would we have a rushed exhausting end?  I tried to forget I was a blogger, I really did. 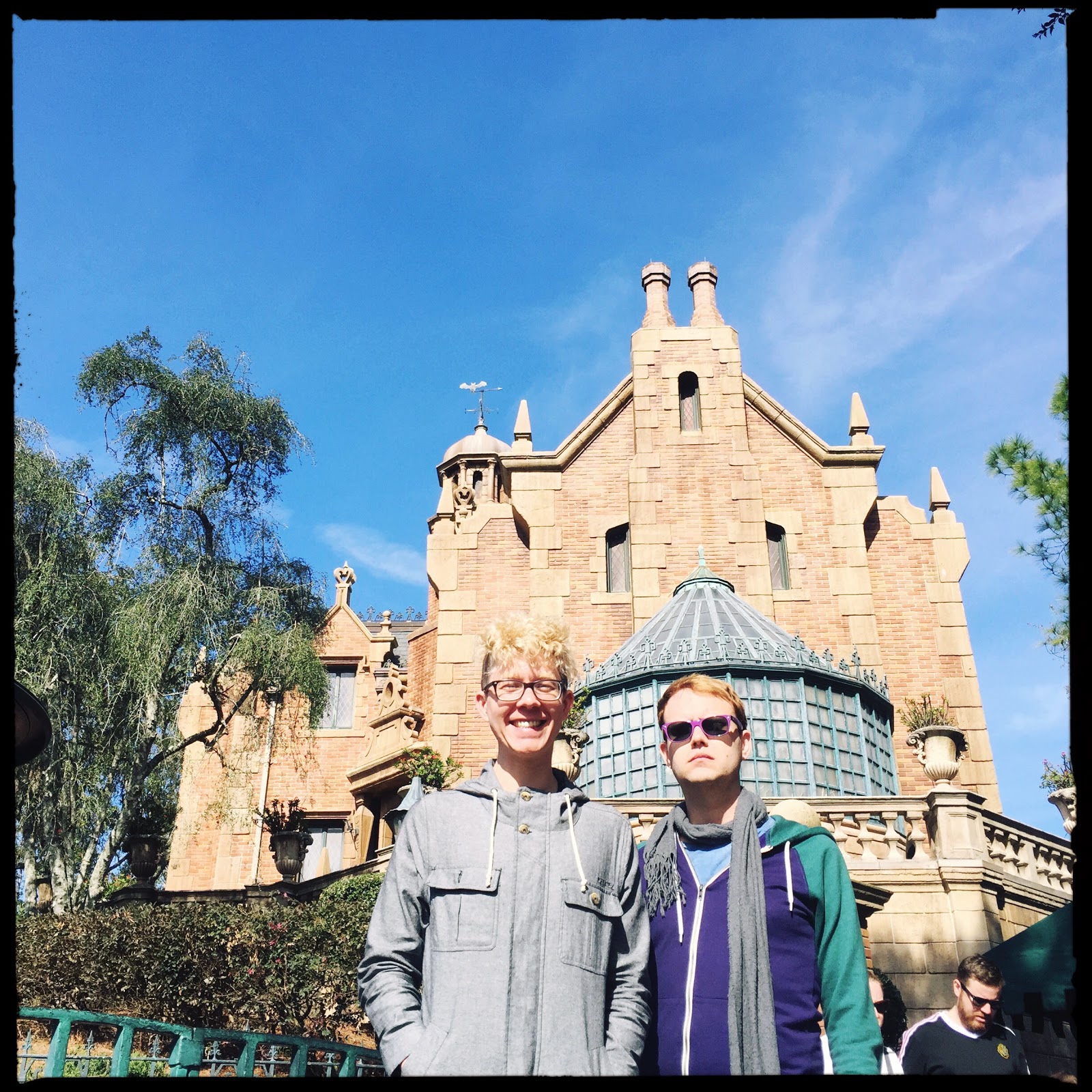 I knew right off the bat that I wanted to visit my favorite few attractions and then a few secondary attractions at the Magic Kingdom before moving on.  We had plans to visit other parks so I knew we couldn't dawdle as long as Adam would have liked.  At the Magic Kingdom we visited Pirates Of The Caribbean, The Haunted Mansion, Peter Pan's Flight, Little Mermaid, and the Tomorrowland Transit Authority People Mover.  Pretty good for an hour and a half. 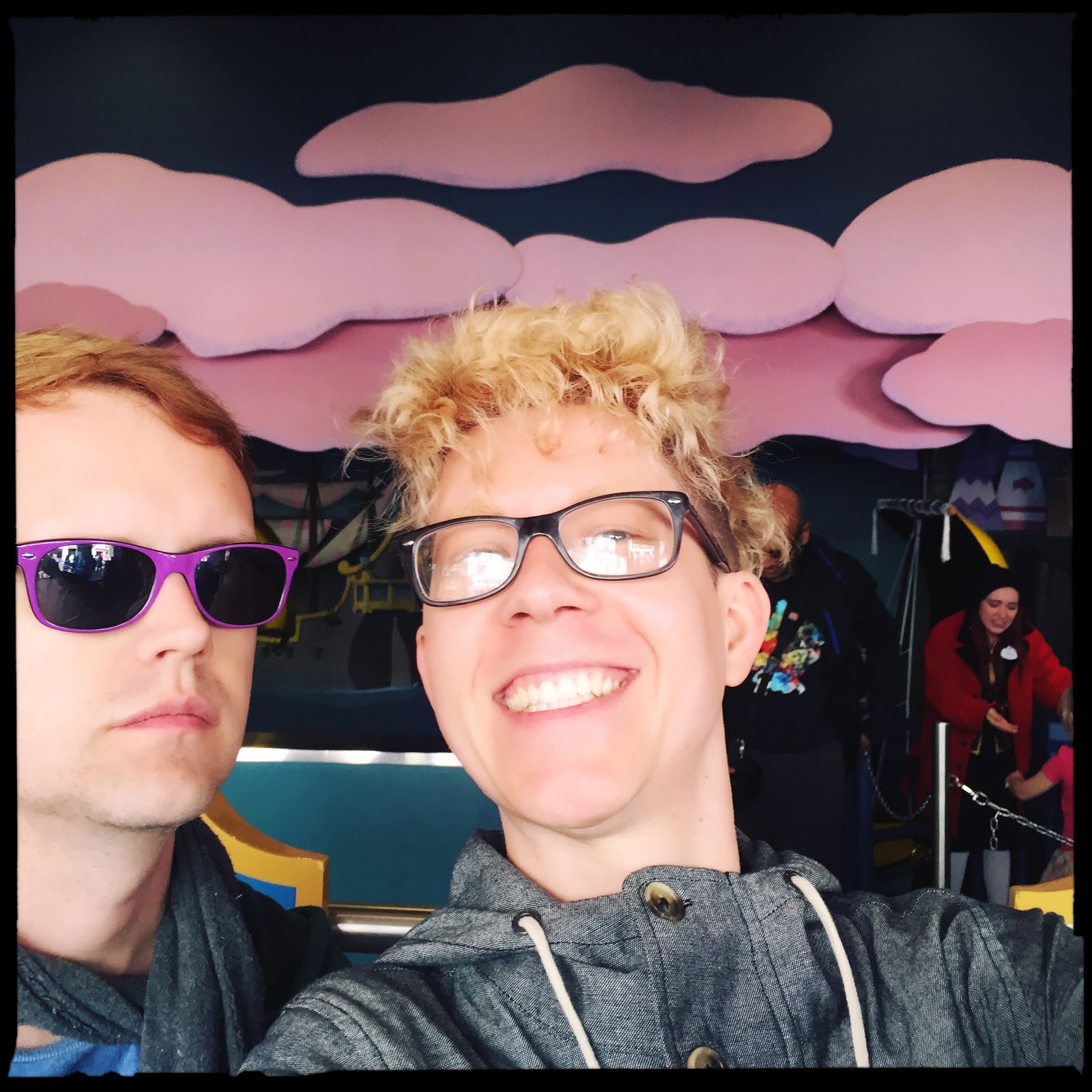 The Magic Kingdom has never been my favorite park, but it does bring out some pretty strong emotions in me.  I hate to see the hub of the park in the condition that its in right now, but I'm super excited to see its completion and a full moat.  All of this will hopefully be done by our trip in October. It is truly obnoxious.
From the Magic Kingdom we took a lovely monorail ride over to Epcot, where we were to spend the next few hours.  Under normal circumstances we would normally spend a good bit of time in Futureworld before heading back to World Showcase. However, with our limited time we had to reverse this. 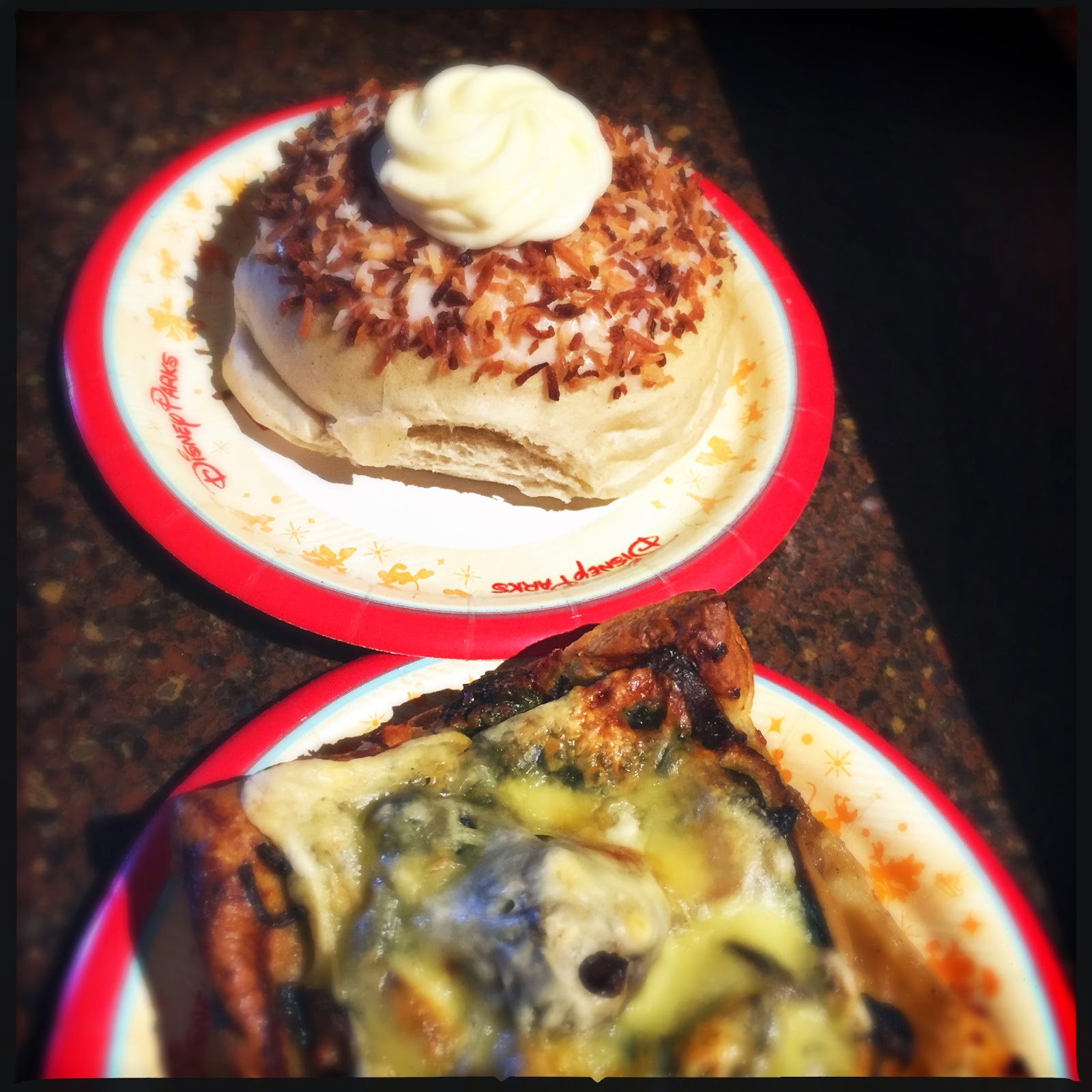 At this point we were pretty hungry, so Adam ran ahead to Germany for his favorite nudel gratin, as I ordered a veggie torte and school bread from the Kringla.  I havent been in World Showcase during a "non festival" time of year in forever, and these counter service restaurants get crazy! I almost forgot that the Kringla can get this busy. But the young ladies of the Kringla were BUSTING THEIR ASS and the line moved quickly.
The food was perfect as always, and I was happy to get a school bread after skipping it in October. I know!!! Right?!?!  The nudel gratin wasn't as cheesy as normal but still really good. 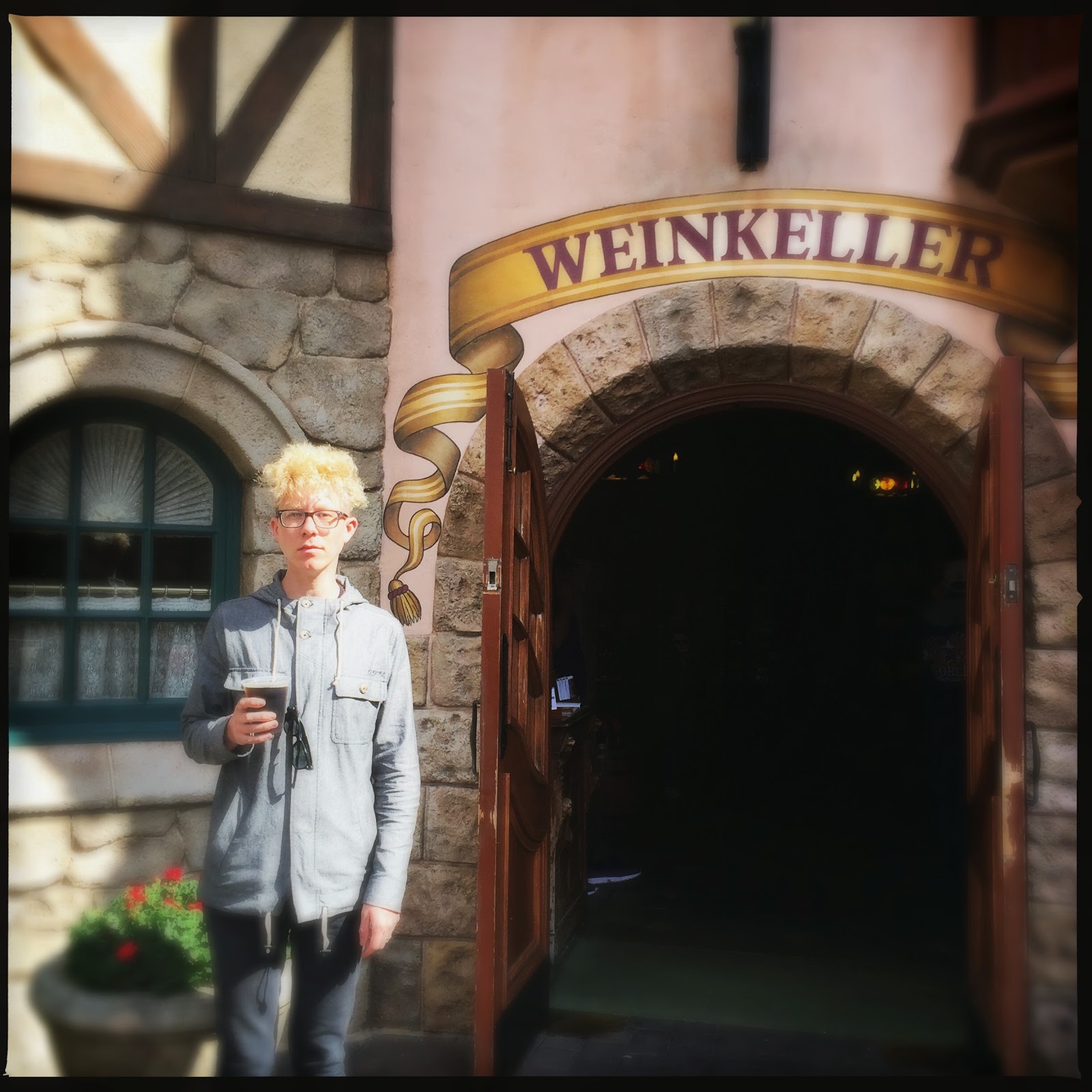 We didn't have any pressing business around World Showcase so after nourishing our growing bodies the meandering continued...but not before getting a beer from the Weinkeller in Germany. 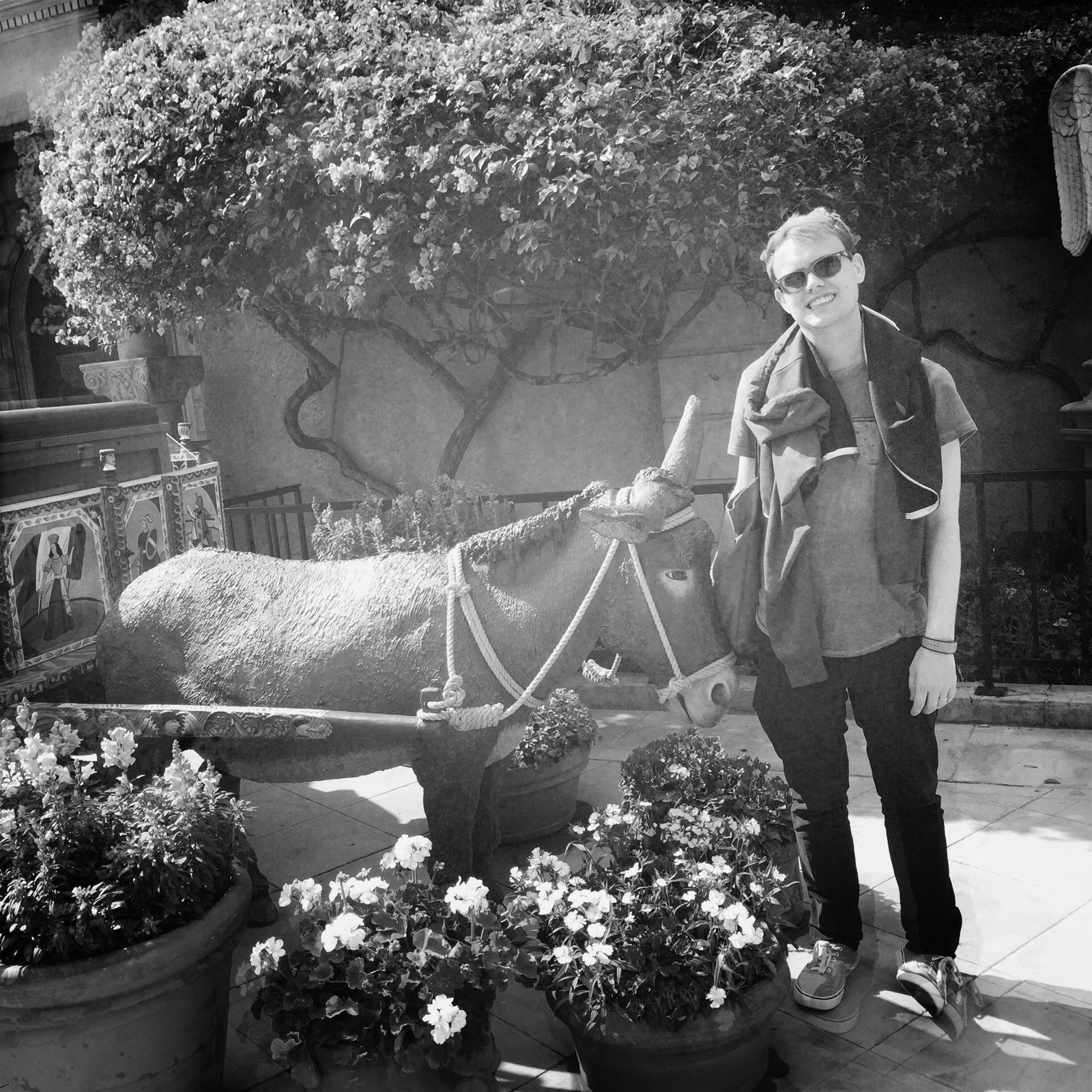 I made Adam pose with my pet donkey.

World Showcase remains pretty consistently enjoyable for us throughout the year, and this was a pretty reassuring way to spend a couple of our precious hours.  Thus securing at least a few good memories and pictures.  But at the last minute we were surprised to see character training taking place in front of World Showplace! It must be the times of year that we tend to visit WDW, but we don't see this too often and were so excited to visit Terrence! Others random characters included Mr. Smee, Mickey, and Minnie... 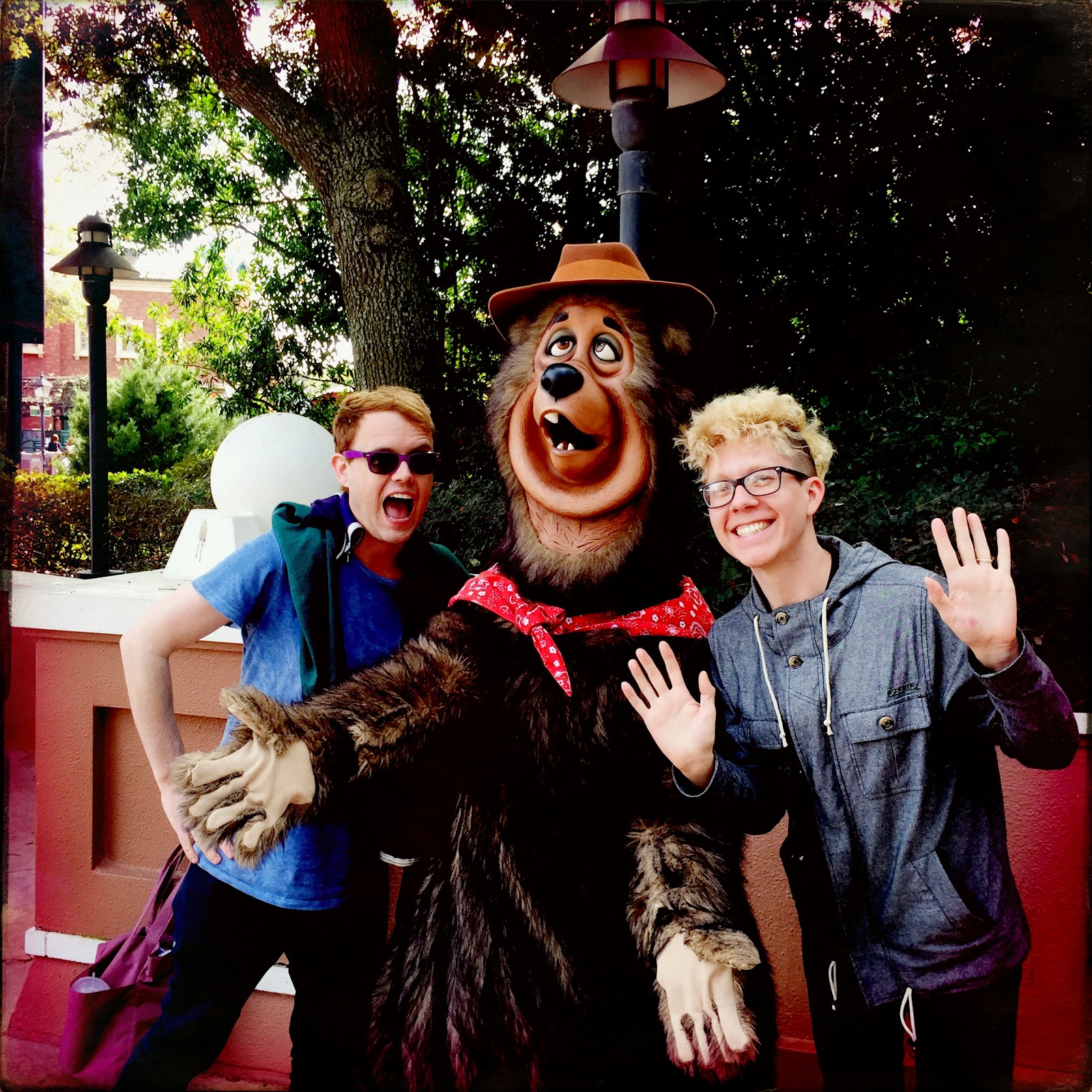 We rounded out our time at Epcot by riding Gran Fiesta Tour (and bumping into our friend Kristen!) and a predetermined necessary ride on Living With The Land.  I mean, how could we not?  The only thing that got us down at Epcot was Spaceship Earth having technical difficulties. Absence truly makes the heart grow fonder. :(
Moving on to Animal Kingdom... 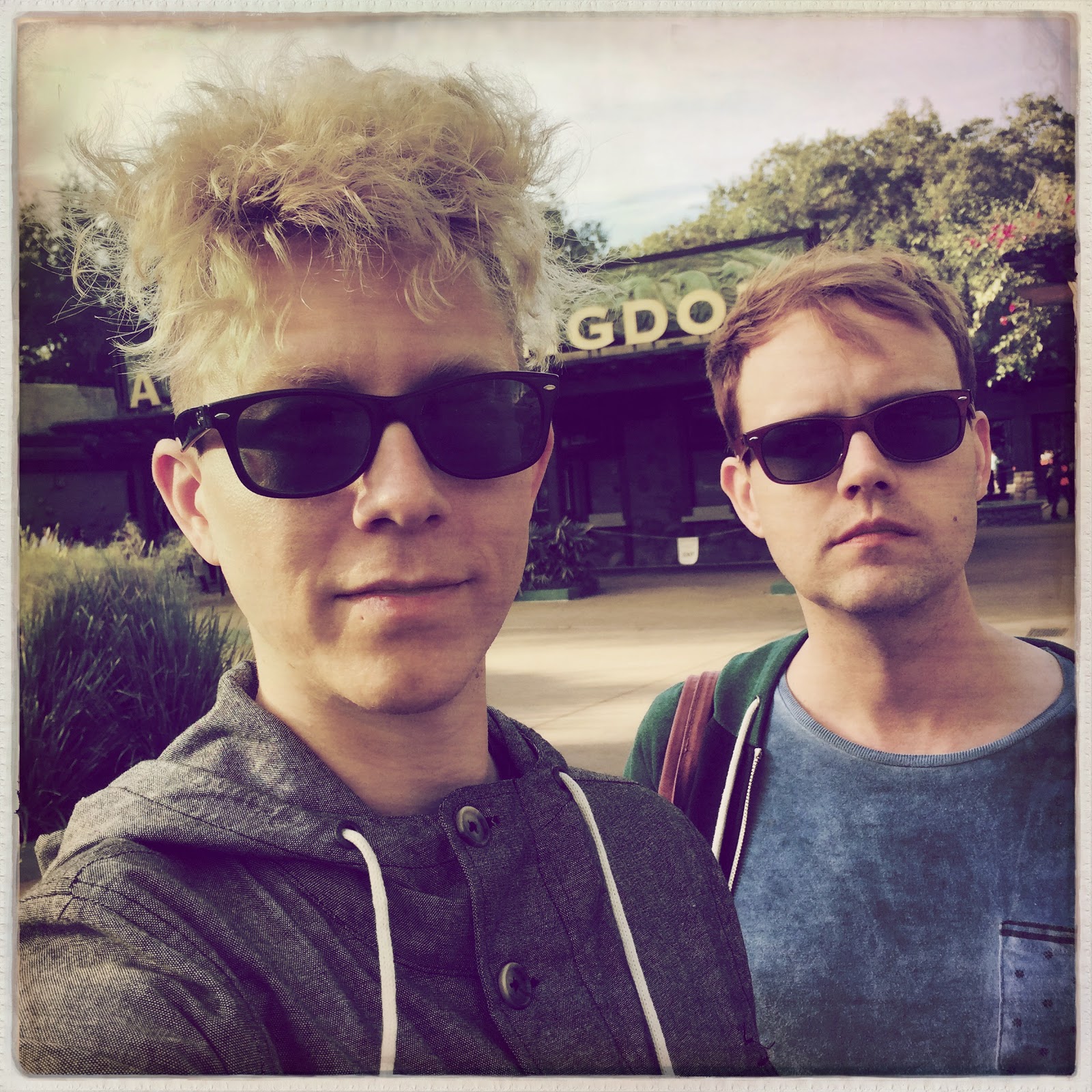 We considered the possibility of skipping Animal Kingdom all together, but my gut told me I would be upset if we didn't.  This is the park to go to if you want the most bang for your proverbial buck. 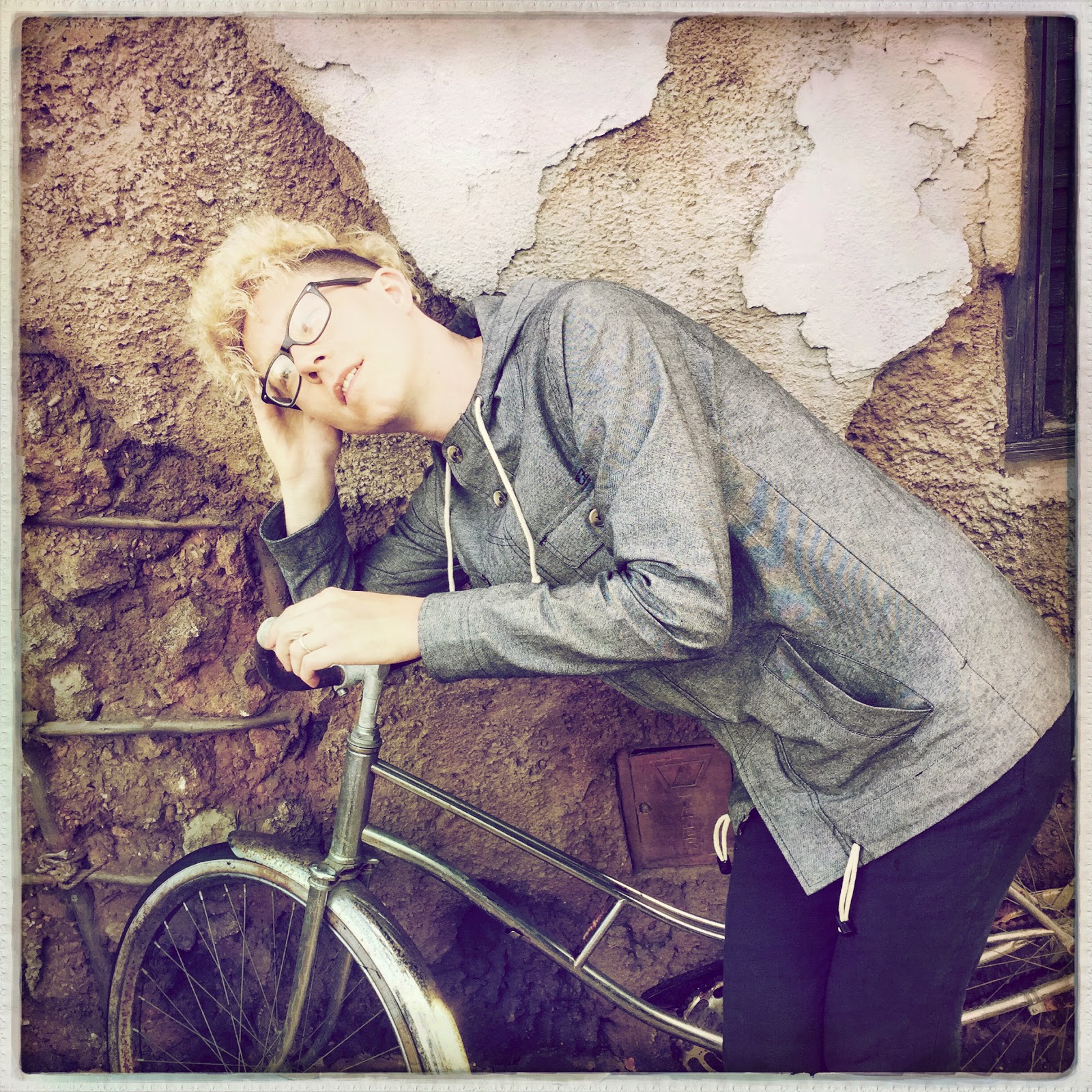 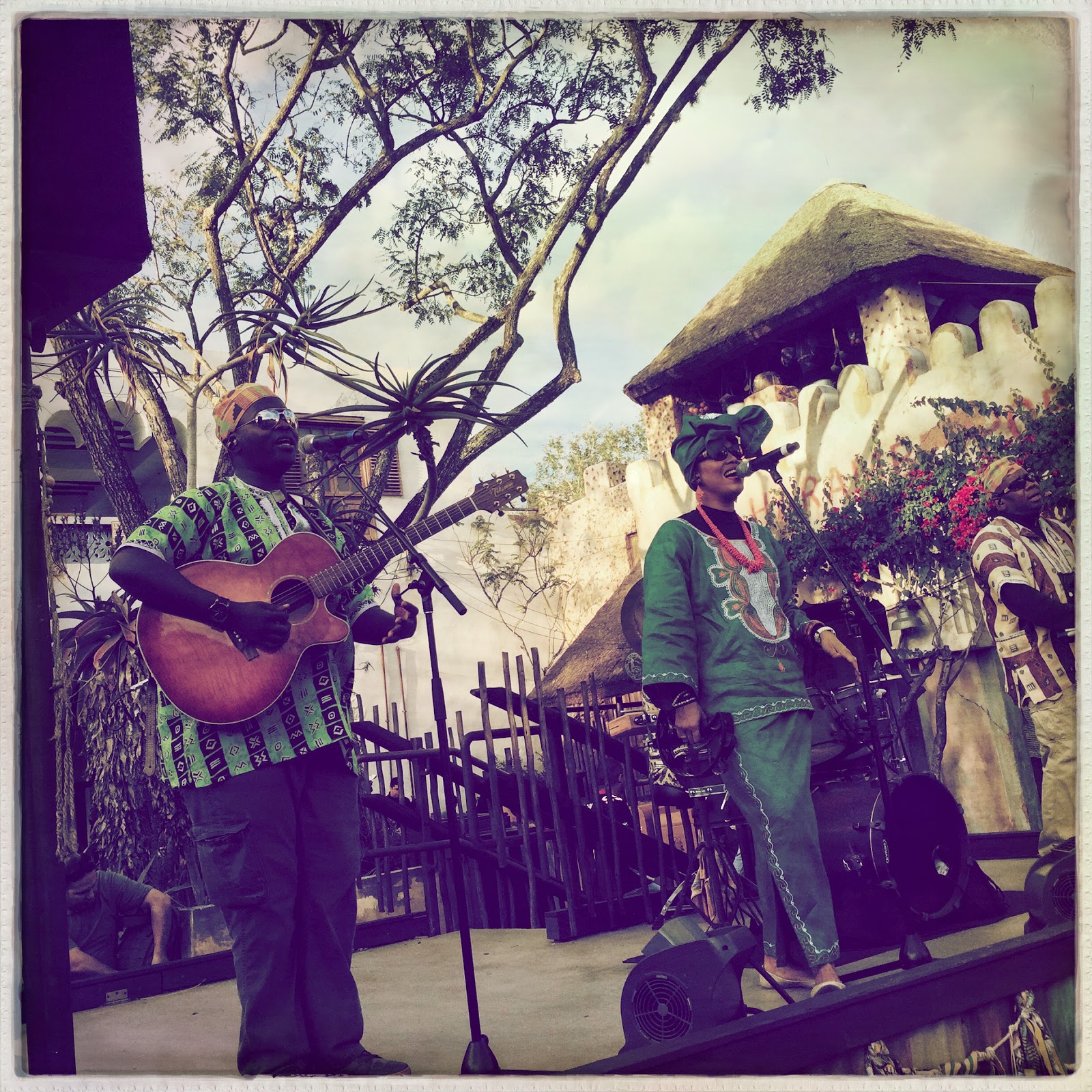 Don't get me wrong, there are hardly the amount of attractions you will find at The Magic Kingdom...but atmosphere wise?  Yeah, this is the park to spend time at.  In fact the only attraction we rode was Expedition Everest due only to Fast Passes we had just acquired.  Otherwise, we just soaked up atmosphere...and beer.  I am so excited for all the stuff going on at this park, Avatar included.

As the sun started going down on our ten hour day at Walt Disney World we moved on from the parks and spent a lovely hour relaxing at the Animal Kingdom Lodge.  This is my home away from home and no Disney World trip would be the same without it.  A veggie flatbread, zebra domes, and a quick hello to Rose the bartender.  These are the things I think about when I'm feeling blue, and I feel so lucky that I was able to fill that emotional reservoir, even if I only had ten hours to do it.