Perhaps one of our sweet Cast Member friends can clear this up for us.  It seem like on certain trips Disney World has a huge flux of Photopass photographers.  They just seem to be everywhere...and not in the usual photo spots either.  Then on the next vacation things will be back to normal. Castle. Spaceship Earth. Blah. Blah.   We've always thought that maybe this was "photographer training season."  Is there any gravity to that assumption?
Anyway, this past trip of ours was one such busy photographer season.  PLUS in addition to that we also happened to get a few other special treats as well. 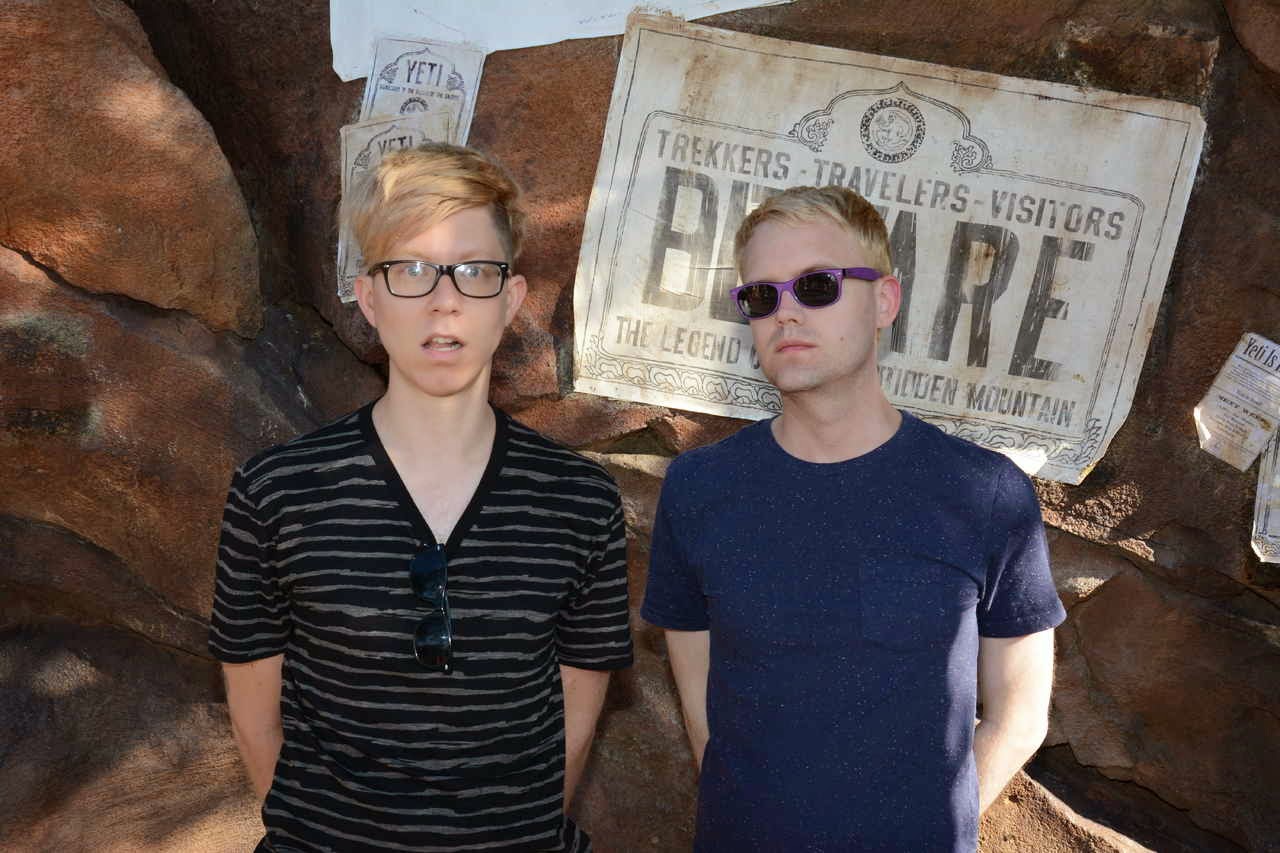 Animal Kingdom was absolutely lousy with Photopass Photographers!  If I see one in a different spot than usual I insist on stopping in our tracks to take a photo.  How could I resist one in my beloved New Harambe?!?! 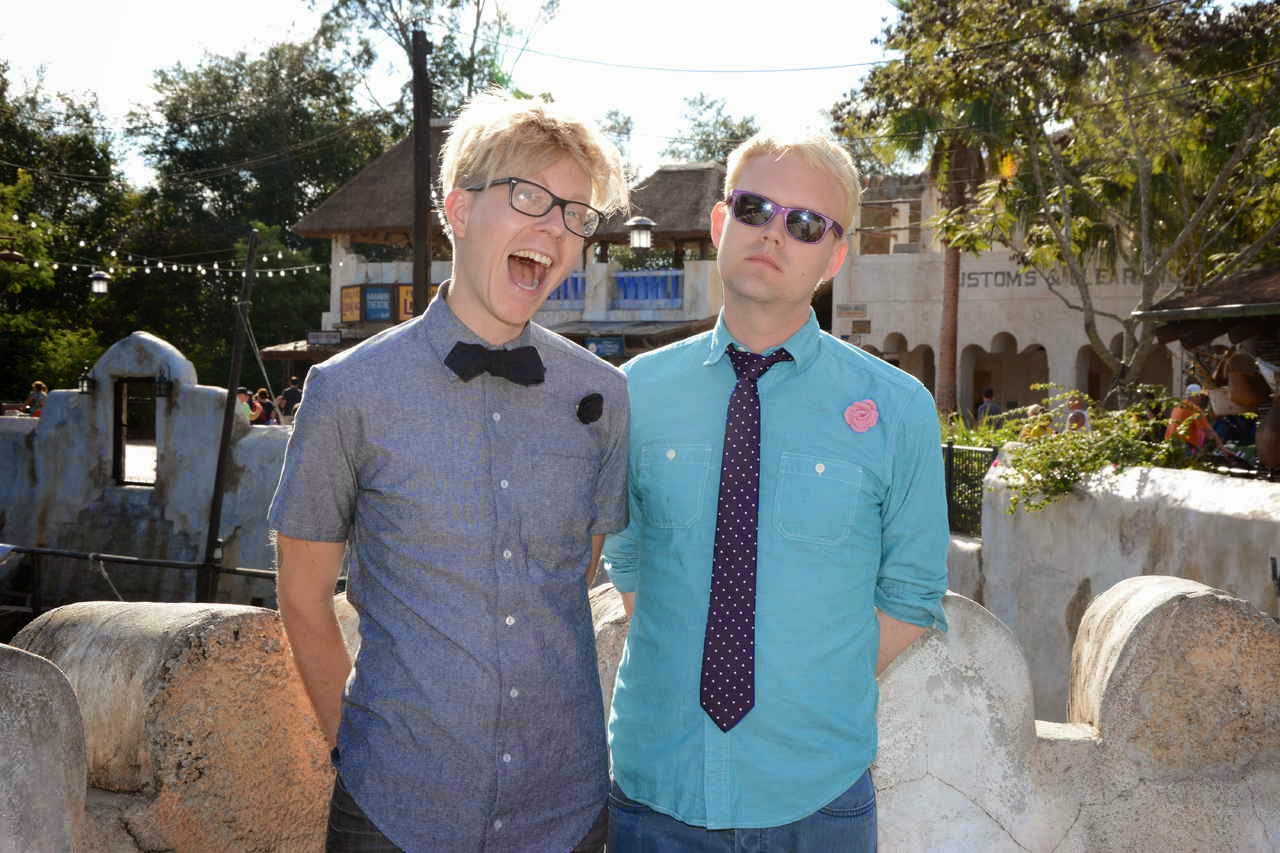 Another special opportunity was Animal Kingdom's randomly extended hours!  There were a few nights on our trip where our favorite park was open until 8:00...and you know we had to stay until park closing.   Nighttime Pocahontas is everything to me. 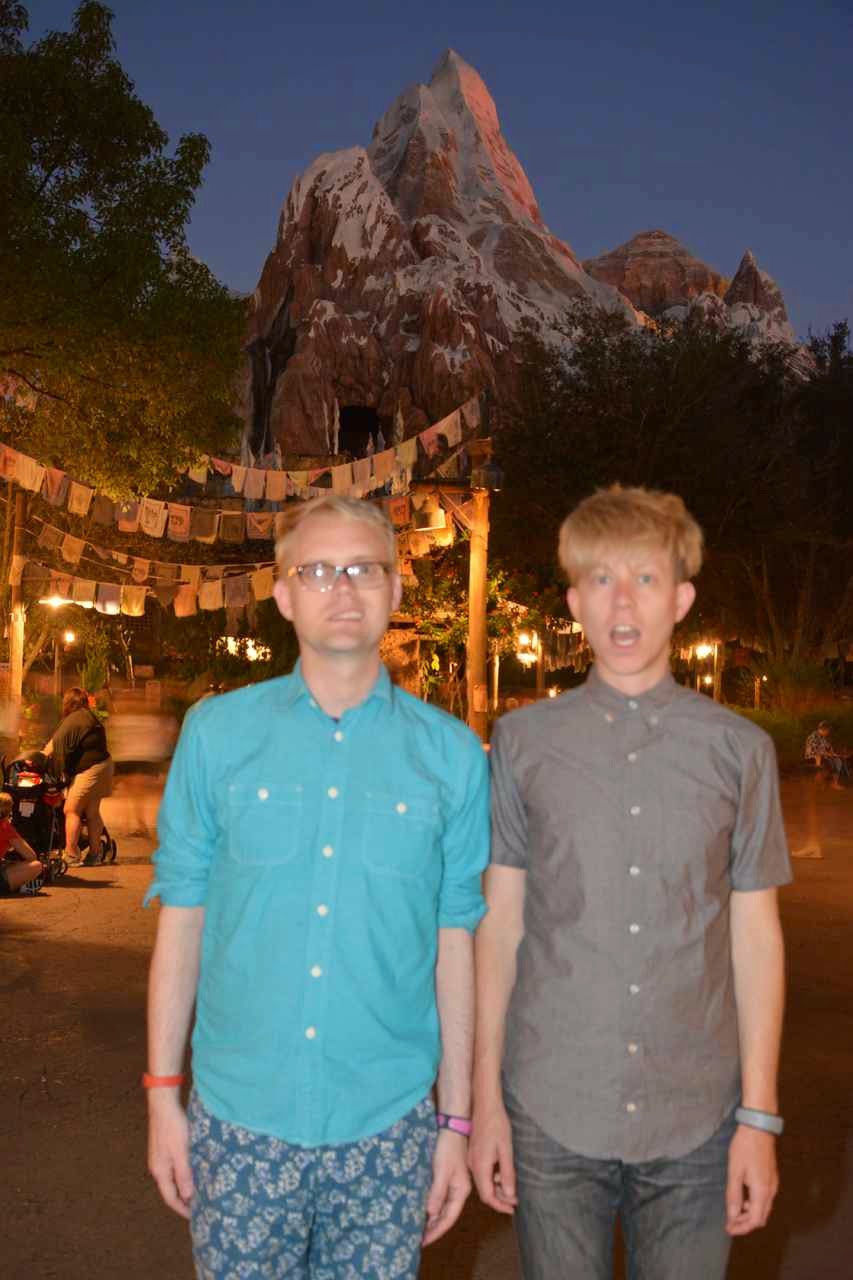 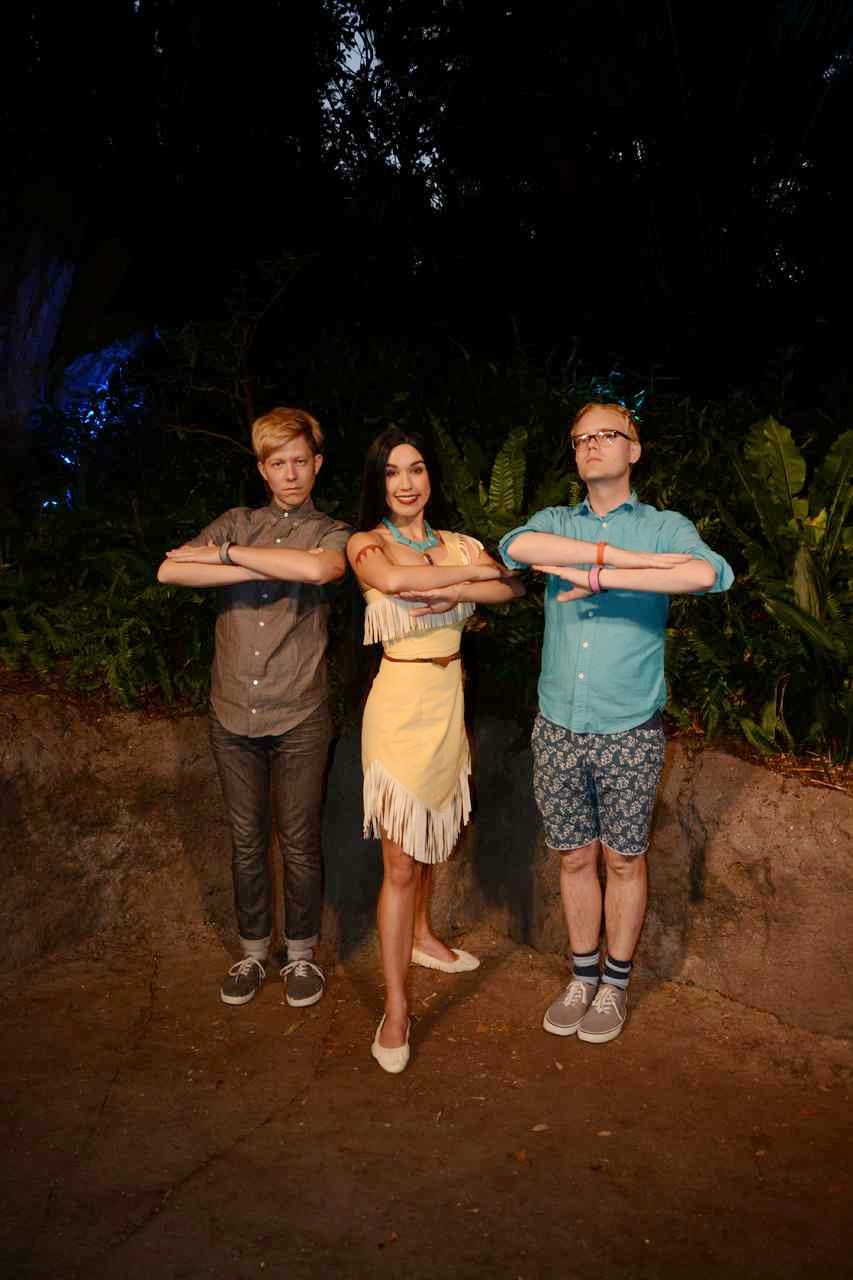 One of the GREATEST THINGS EVER is that onride photos are now linked to your Magic Band!!!!  You don't have to scan it or anything, the RFID is read as the picture is taken...which is a miraculous use of the technology.  We have like ten photos from Mine Train...but none are as good as the gem (pun intended) below.  And note our technique on Splash Mountain. 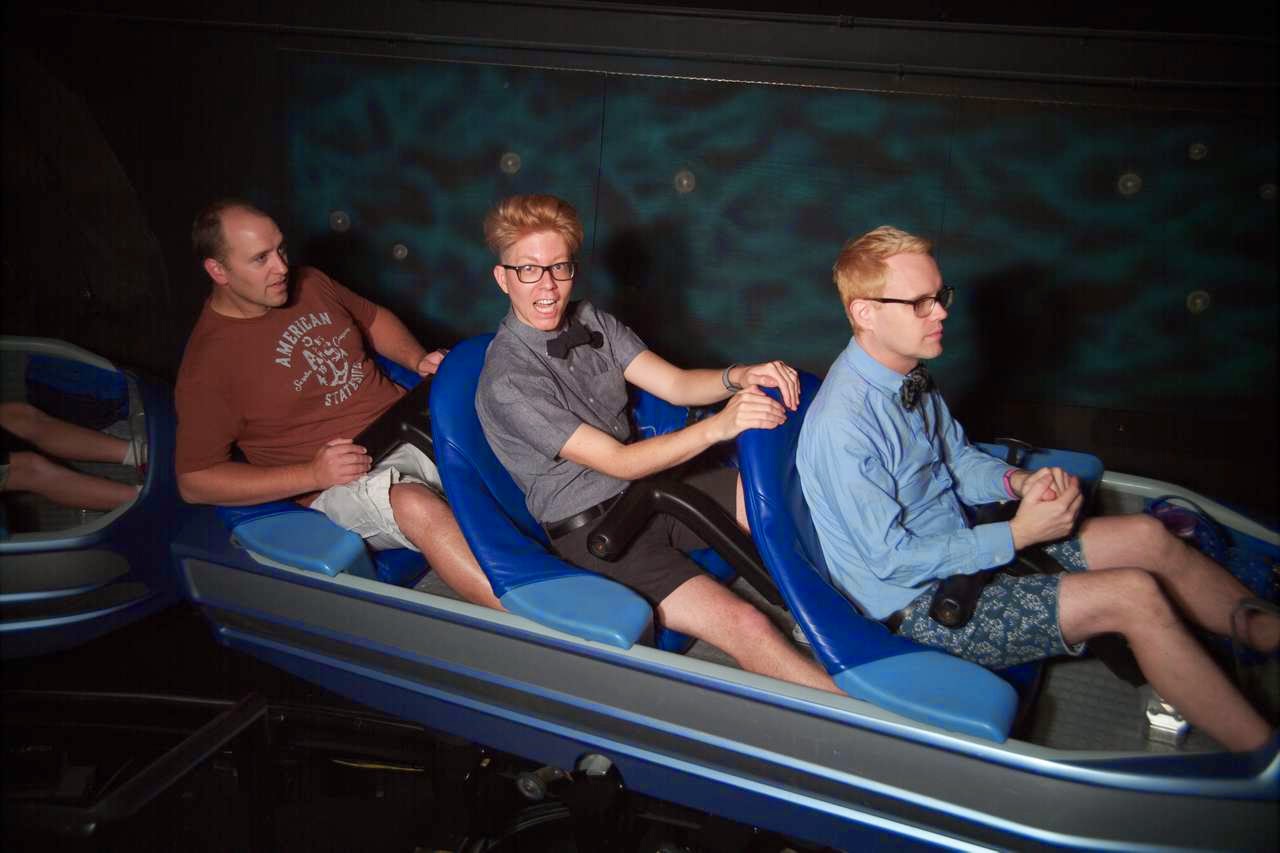 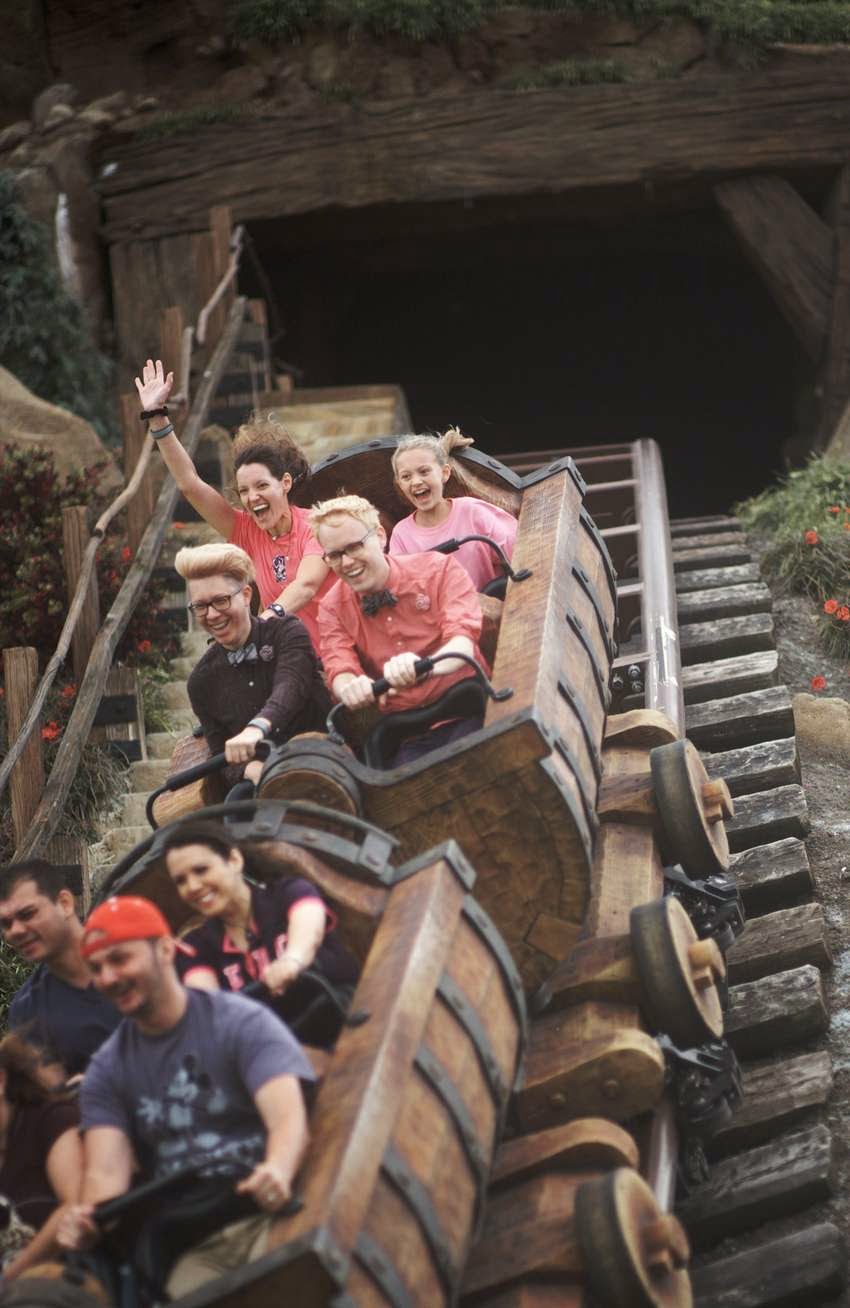 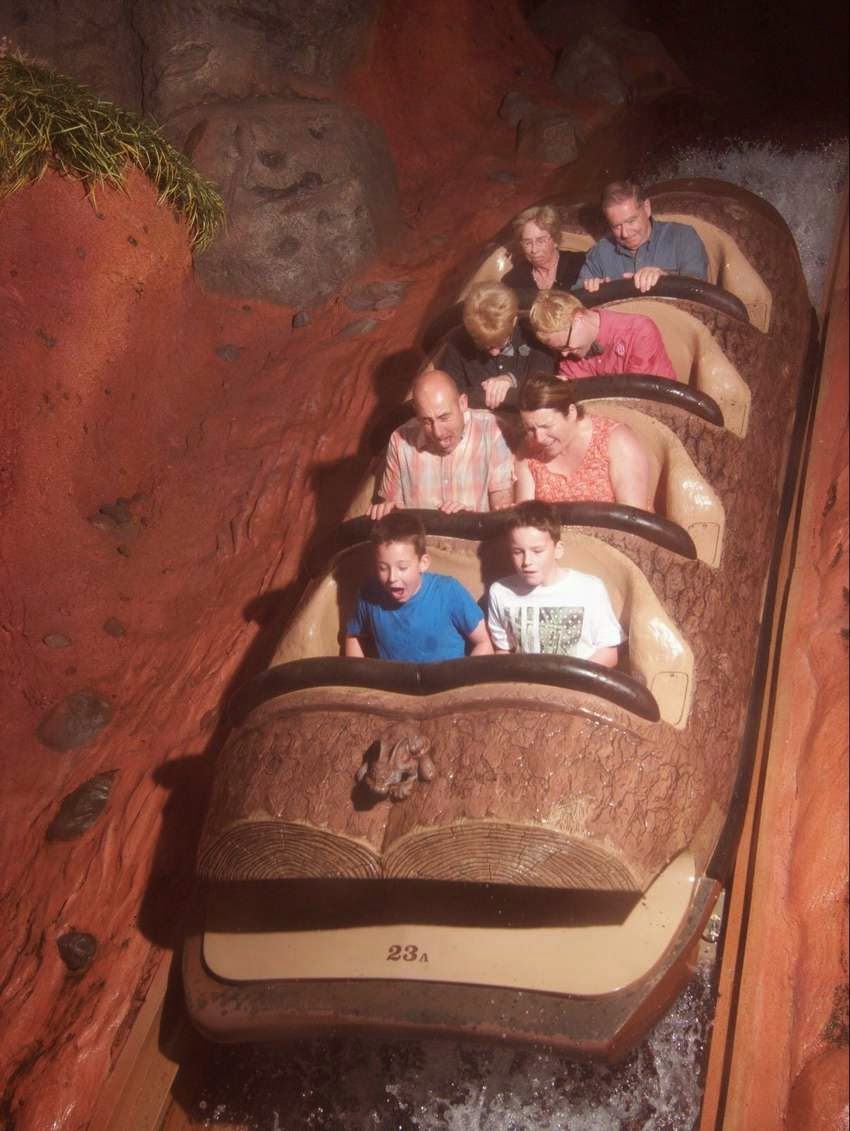 And here are some random awesome Photopass Photos.   We were very enthusiastic to meet Cars. Yes indeed. 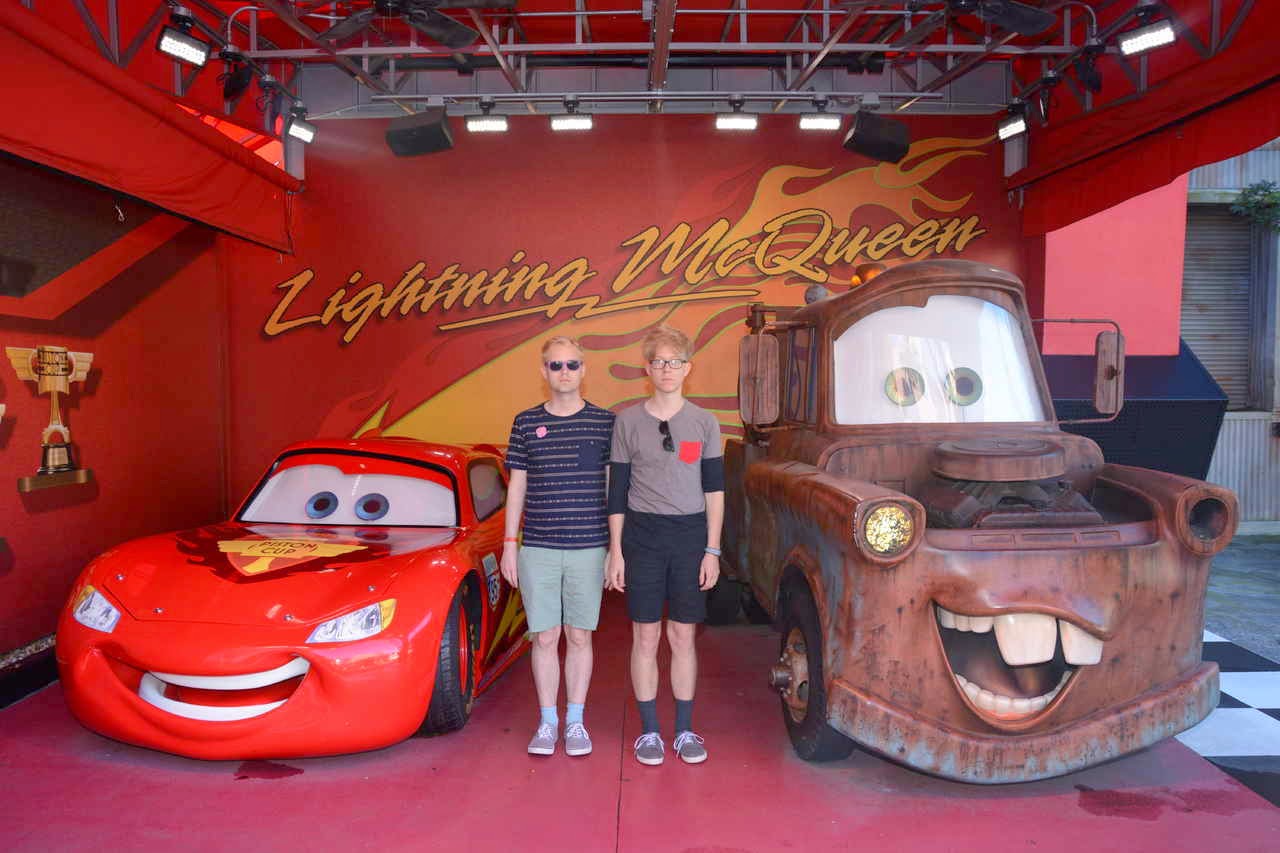 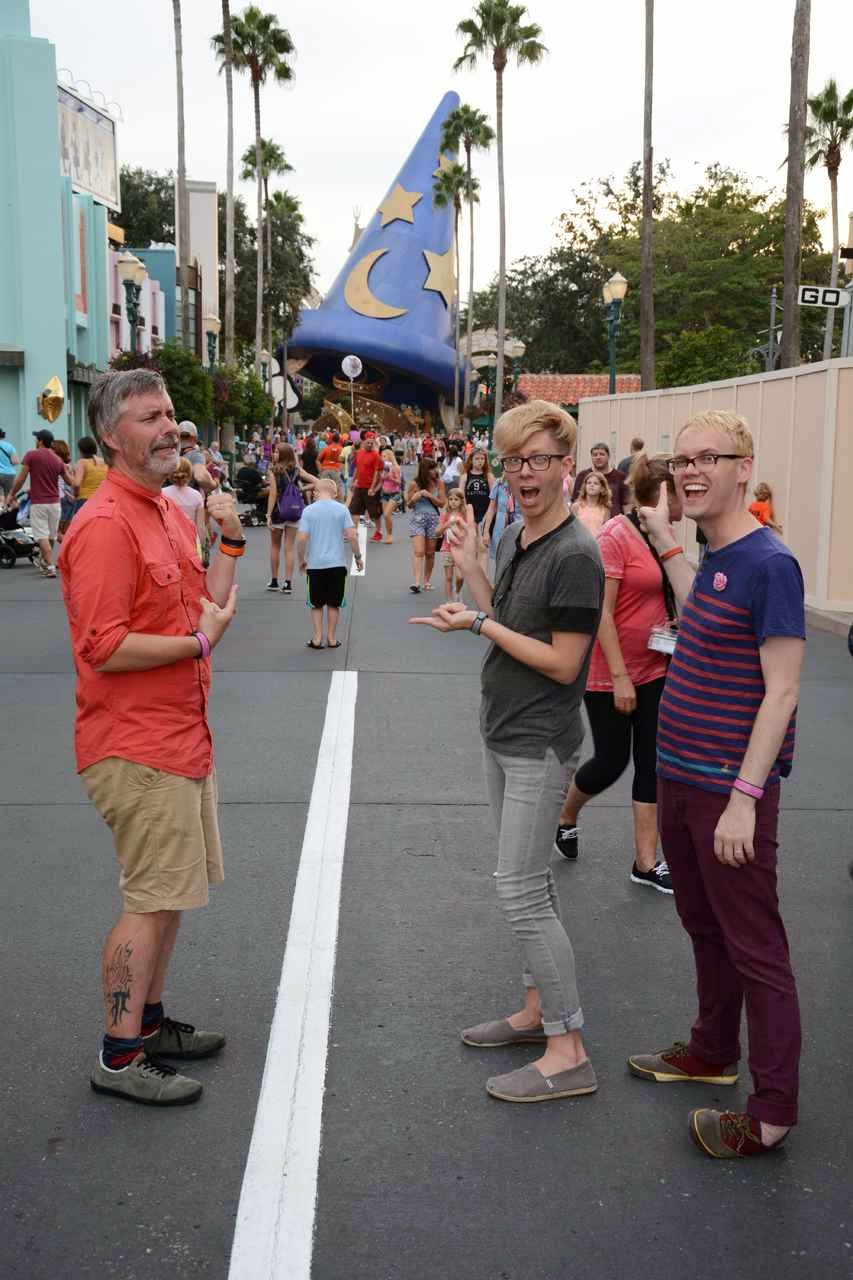 Did we mention that we knew the Sorcerers Hat was going away well before it blew up the Disney Internet?  Well we did.  Here is us saying goodbye. 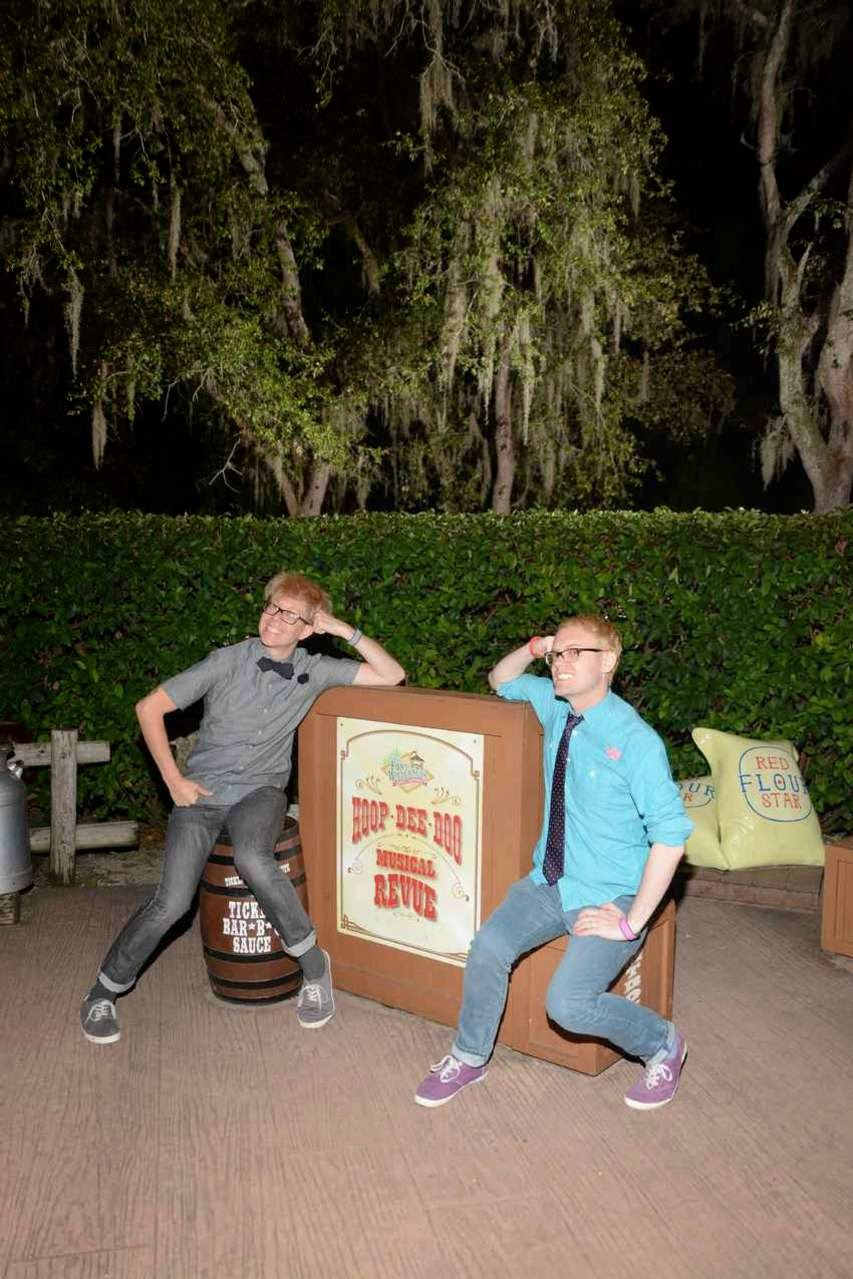 The lady taking pictures at Hoop Dee Doo told us this photo wouldn't come out good because we were both sitting down. Uh...I guess we showed her. 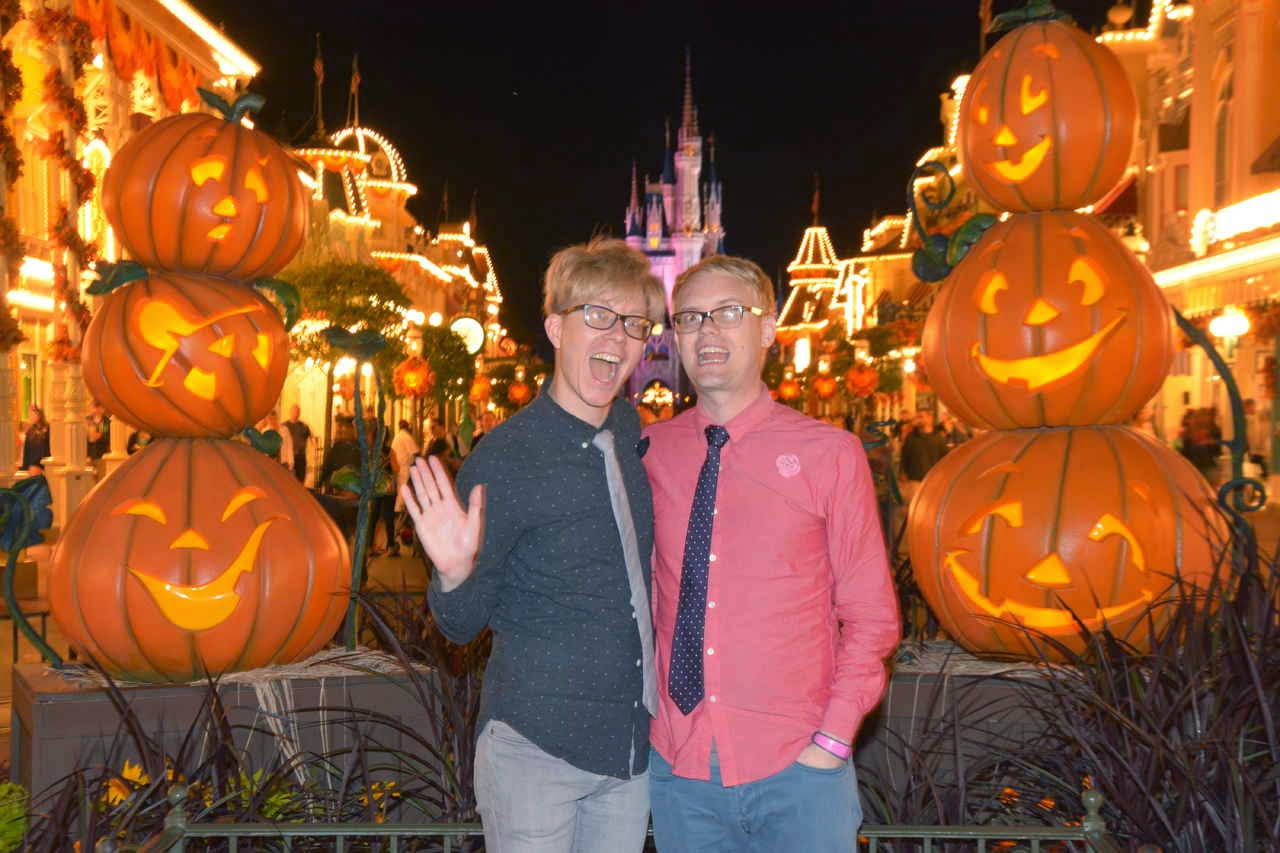 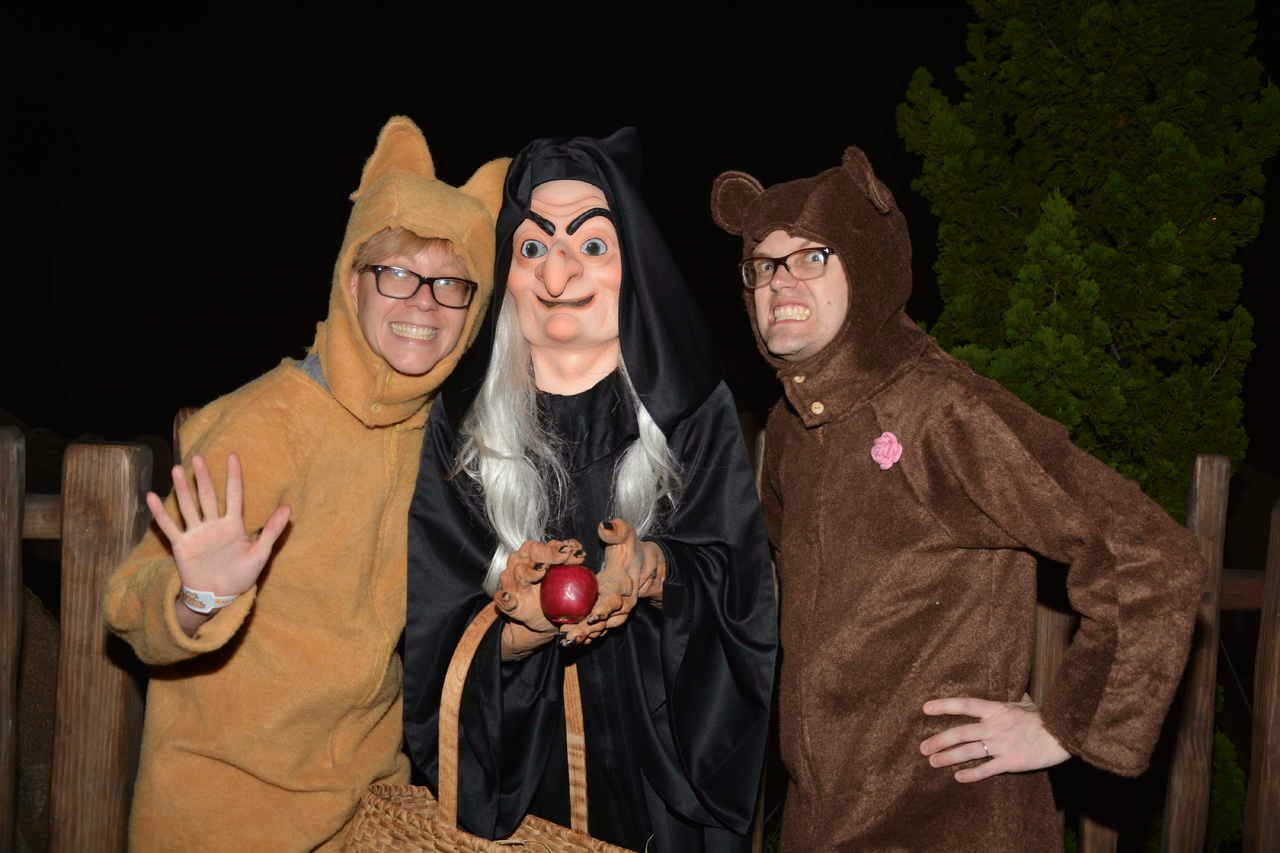 This is just the surface of some really terrific photos we had taken in October.  Photopass really does remain such an incredible and valuable service at Walt Disney World.  There are so many times that I regret just taking a photo of Adam and not getting in the photo myself, or vice versa.  As the years go on we use Photopass more and more, and always have lovely interactions with these under appreciated Cast Members.  Keep up the good work guys!

Do you have a favorite photopass spot?  Do you buy into this service?  Have you ever asked a CM to take your photo somewhere specifically? Let us know over on Twitter, Facebook, or SHOW US on Instagram!
Posted by Adam and Andrew at Friday, December 05, 2014