One of the more random food items to appear on my October Trip 2014 Food Bucket List (yes thats a thing...) was a longtime oddity at Disney's Hollywood Studios...the cantaloupe cucumber salad. 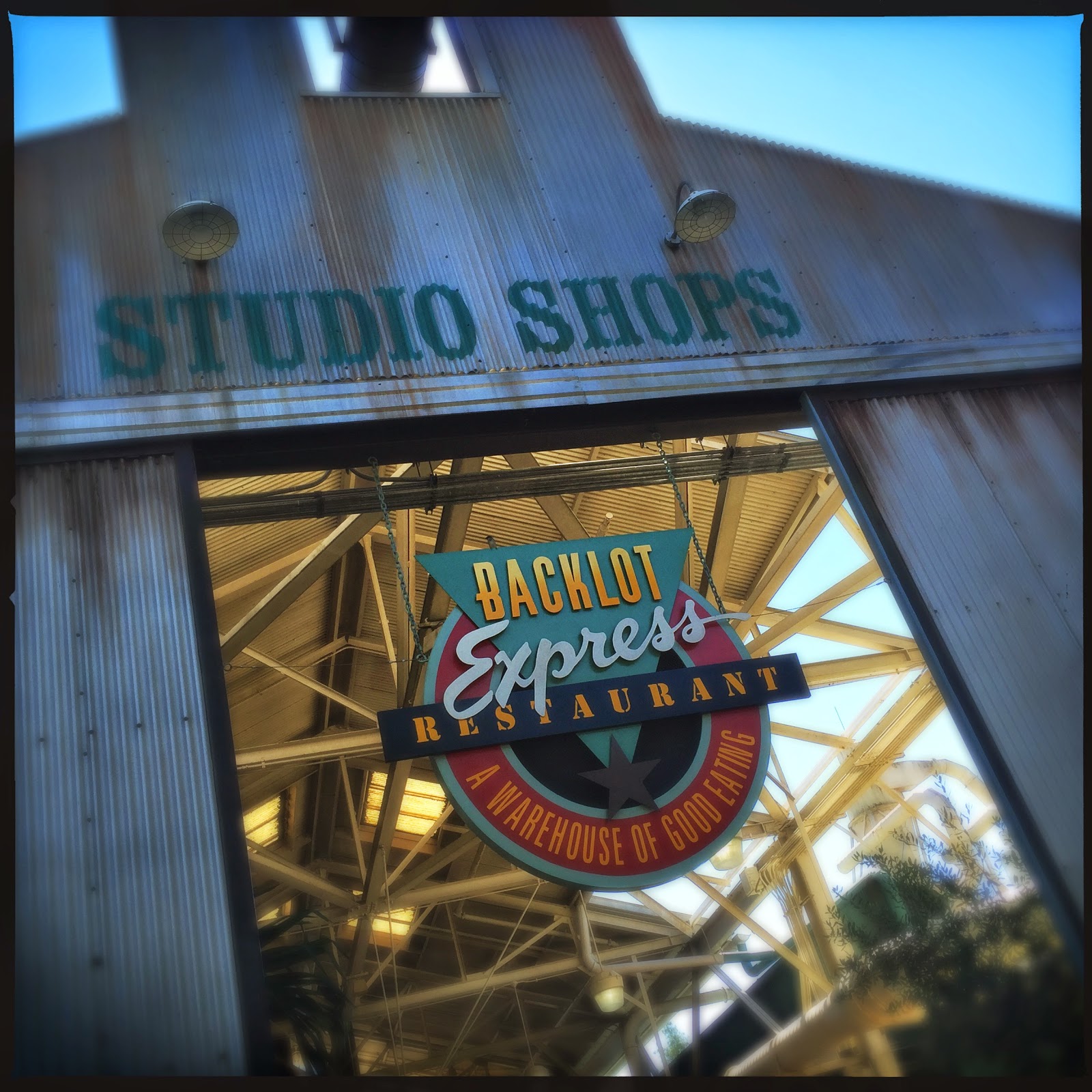 First of all, I know what you're thinking: "boys, why were you at Disney's Hollywood Studios at lunch time!?!?" and you would be correct in noticing the weirdness in that.  However, I am dedicated to my blogging and made a point of spending time in this park before its big refurbishment.  Lord knows I will not have any "too little time" spent in this old incarnation of the studios...
Backlot Express is a cavernous eatery designed for volume.  The ordering system is recognizable to any Disney Parks guest...think Restaurantosaurus.  There are smaller rooms along the outskirts of the restaurant which are very lightly themed.  Something to do with cars and movies...I honestly don't really get it...but it is fun for sure. 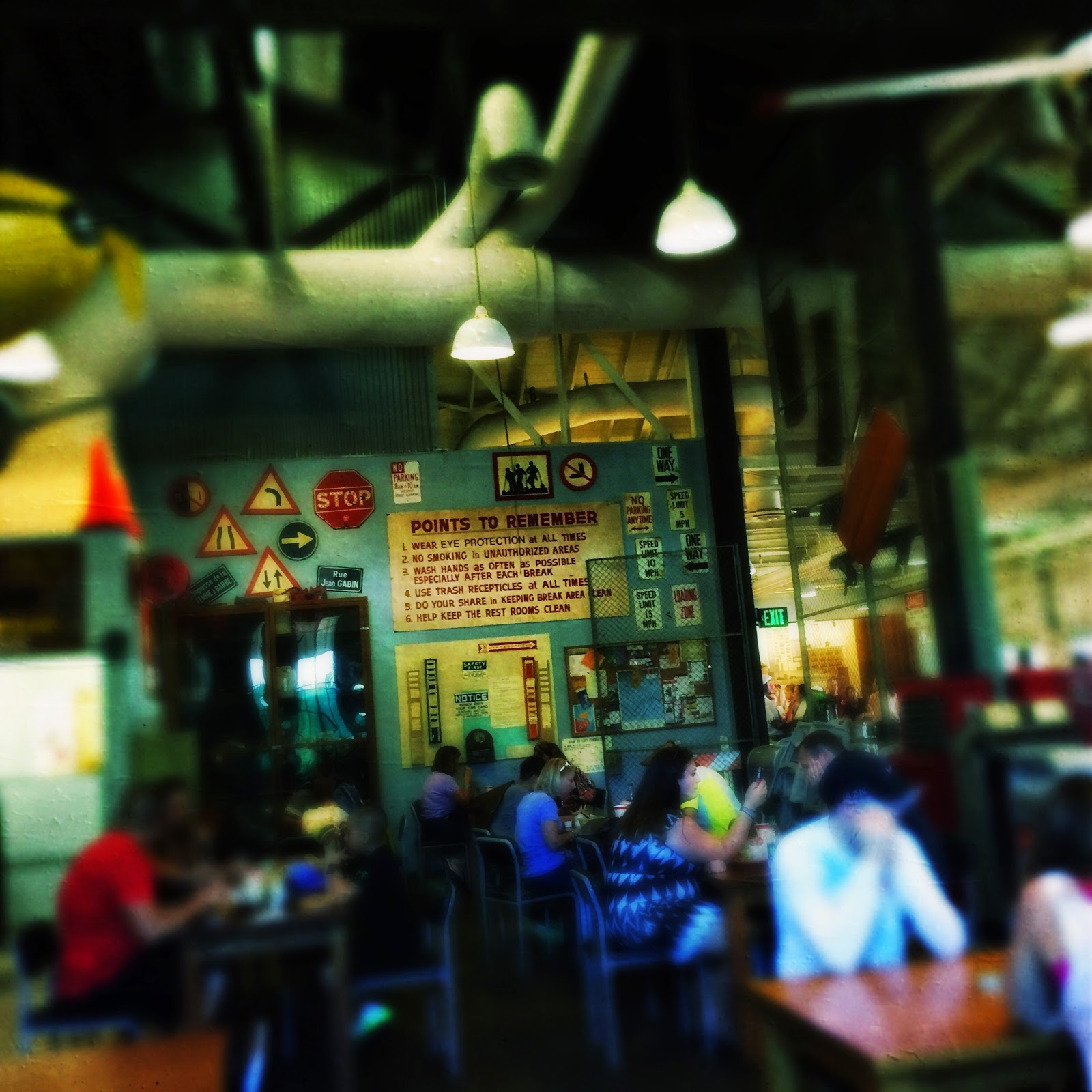 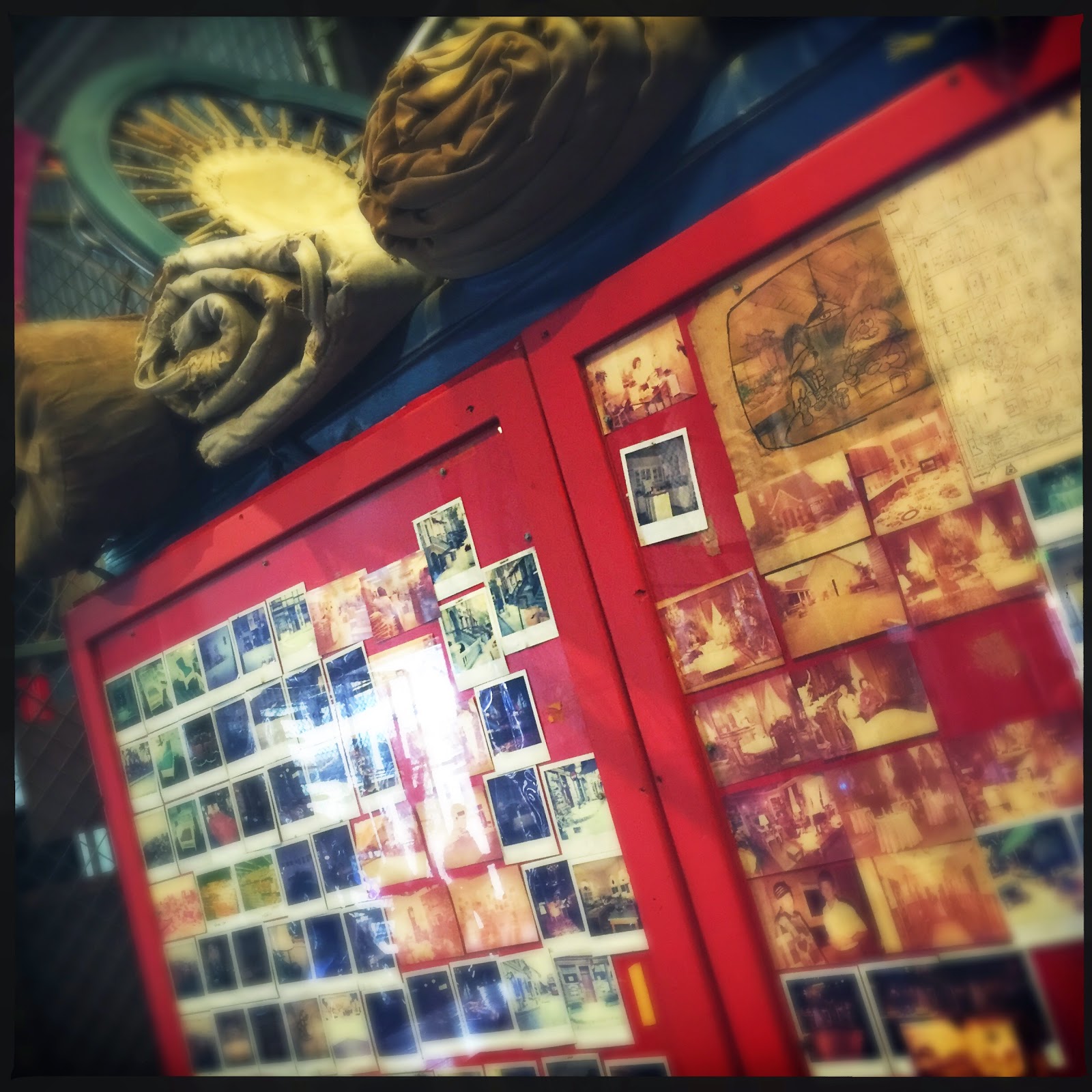 I do appreciate the industrial nature of the theming, with its exposed pipes and cement floor. There are also fun little signs, and (real??) movie props throughout to hold your attention.  PLUS this restaurant still has a refillable soda station, which is very welcome especially when you've ordered a kids meal that comes with a tiny paper cup. 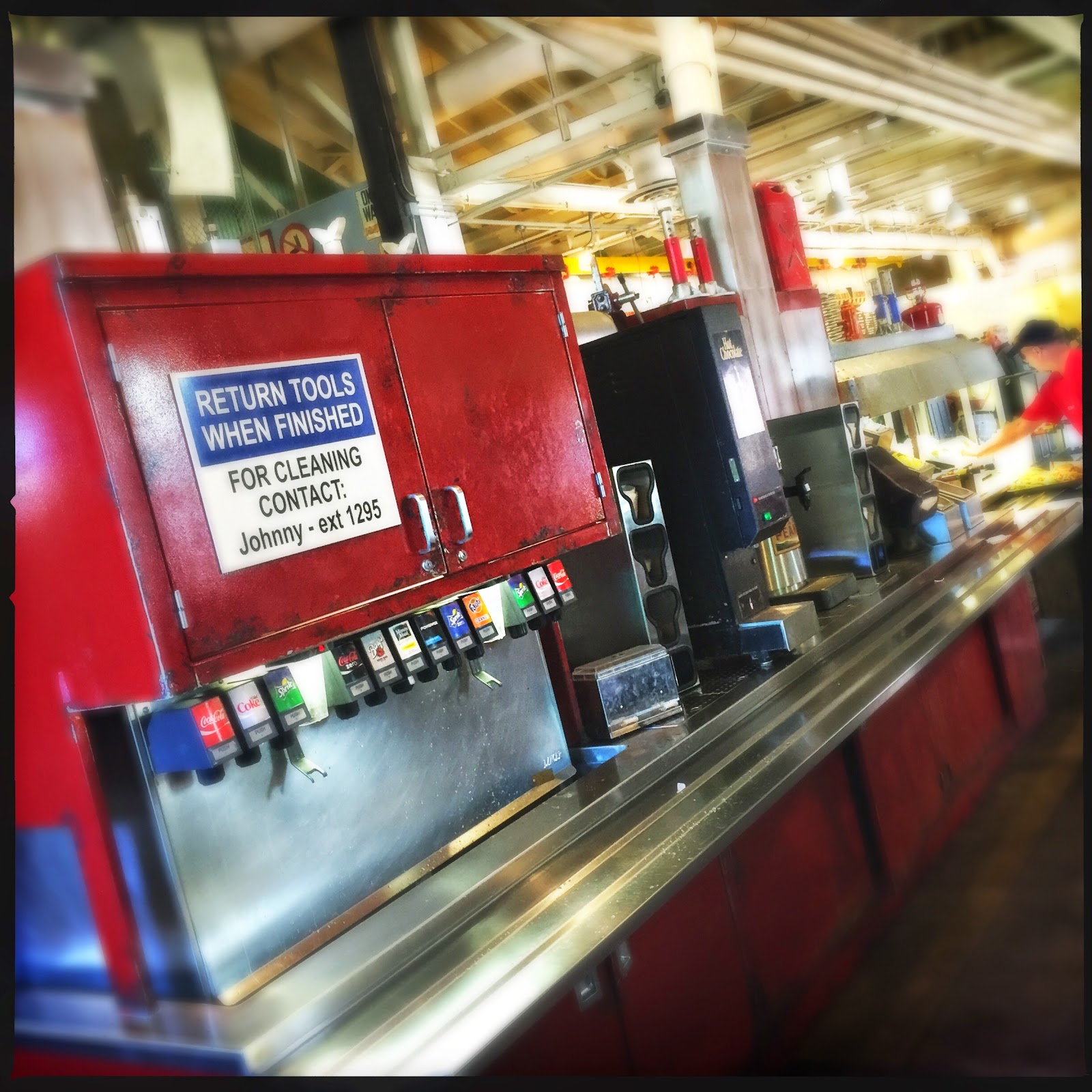 Anyone who listens to Disney Hipster Podcast has probably heard me bring up the cantaloupe cucumber salad before...basically anytime Hollywood Studios/food comes up in conversation.  It might seem weird, but I've been obsessed with the idea of trying this salad for the last couple of years, but never went out of my way to get it...well my friends, here it is. 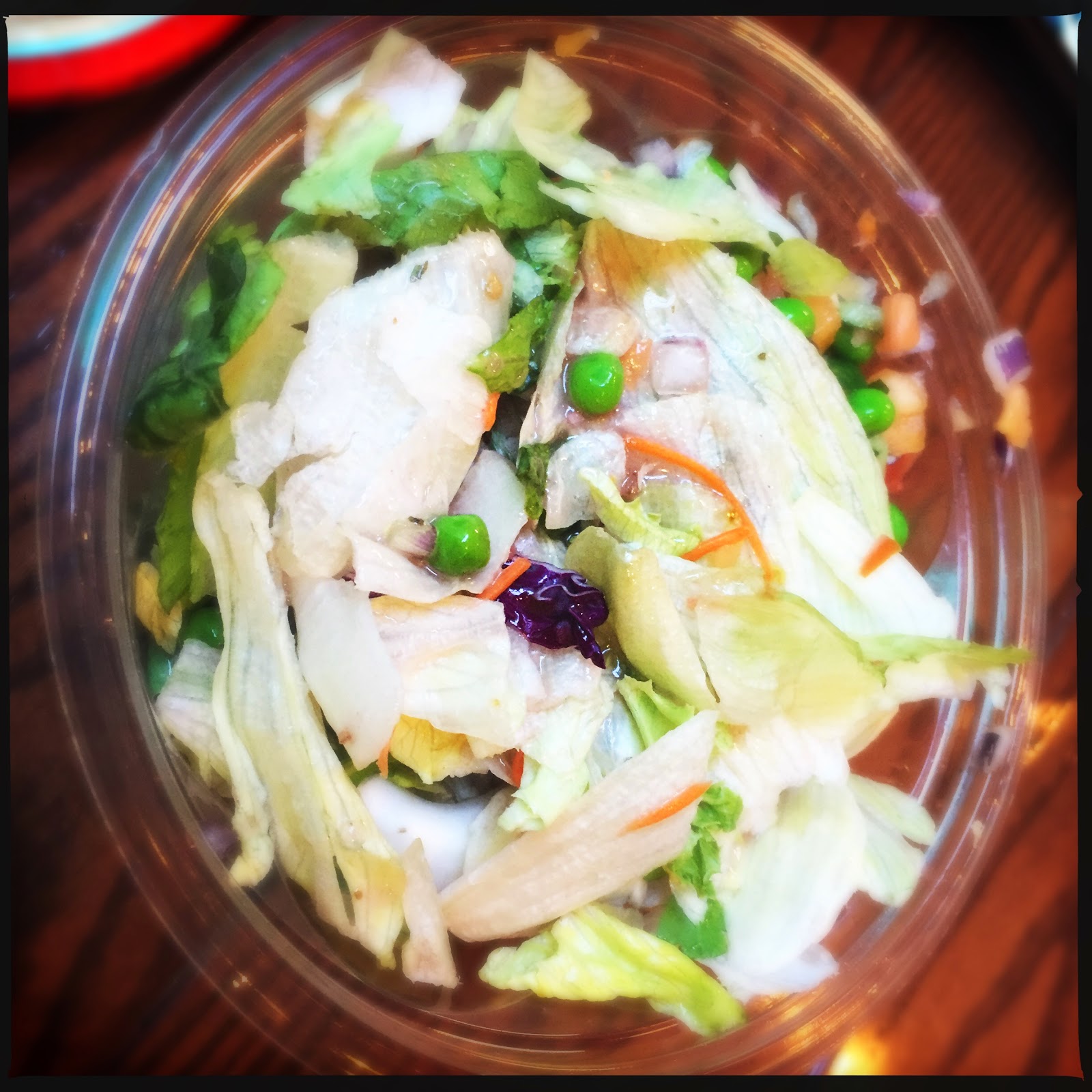 Womp womp...right?  I wasn't upset about the iceberg mix, I actually love iceberg lettuce, but it appeared totally basic.  Then something magical happened. After shuffling a few lettuce leaves around I found a treasure underneath. 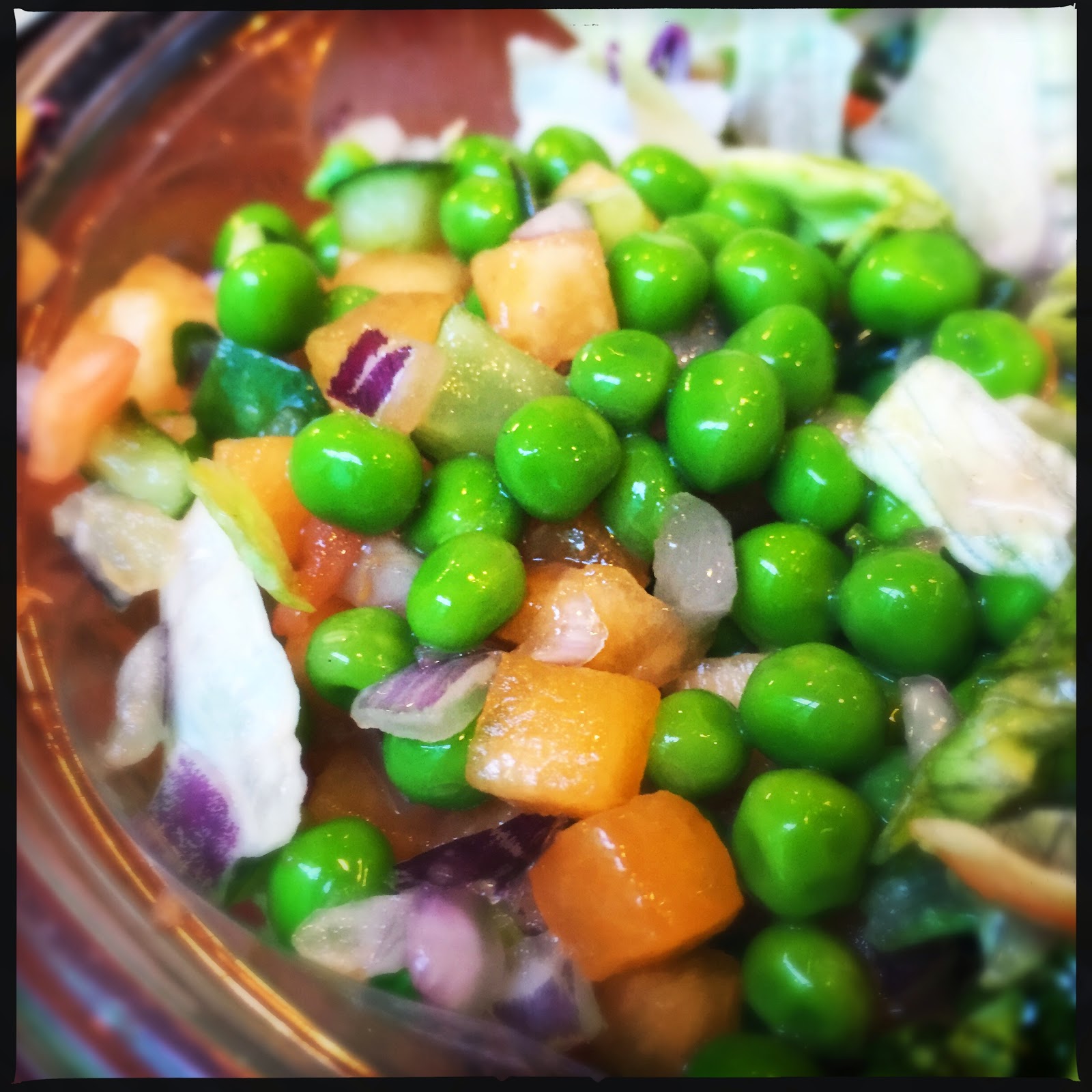 Jackpot!  The very essence of what I was ordering was merely hiding out.  A yummy mix of diced cantaloupe, cucumber, red onions, and peas.  These toppings were in fact very plentiful and full of flavor. However, the supposed star of the show, the cantaloupe, was overly ripe.  You know when melon goes from perfect to "too sweet and mushy"?  Thats what happened.  As it turns out the peas were an absolute delight, and surprising firm and fresh.  For those of you wondering the red onion was very subtle and didn't overpower anything.
The dressing was touted as a zinfandel vinaigrette...but you know how Disney world dressings are. Each vinaigrette is basically the same, with a different name. (champagne, balsamic, pomegranate, fig...) Its a little frustrating once you realized the scheme.  But honestly, this salad was really really yummy, and super filling!  It is a solid vegan option at Hollywood Studios, and I hope it sticks around for a while...