Whats So Special About Pecos Bills?

Pecos Bill Tall Tale Inn & Cafe is a quick service restaurant in Frontierland in the Magic Kingdom. More commonly referred to as simple Pecos Bills, the restaurants food isn't anything special...but there is something about this eatery that strikes a chords with certain people.  Lets explore... 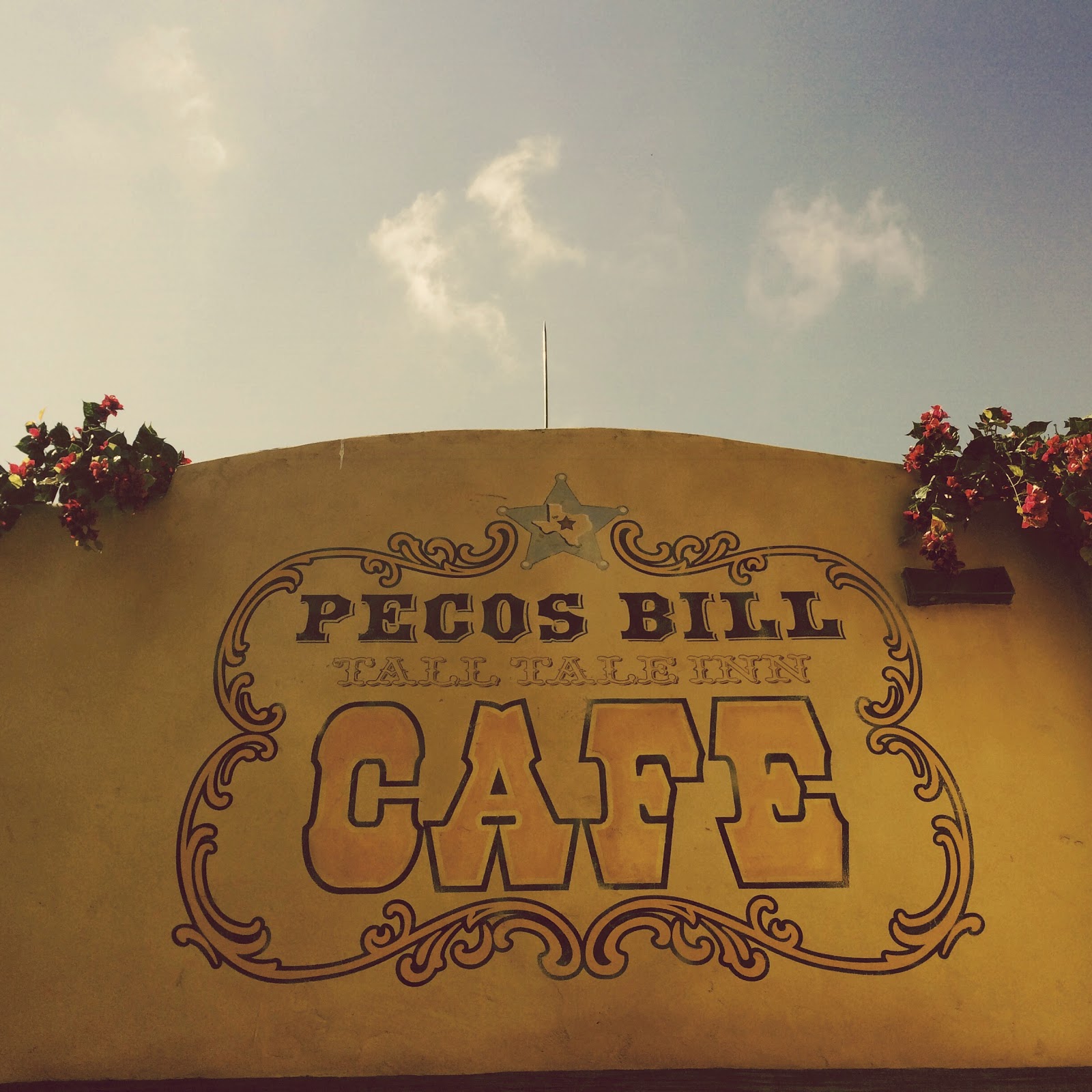 Lacking the intimacy and subtle charm of the nearby (and often preferred) Columbia Harbor House, Pecos Bills serves a much needed purpose...capacity.  This place is designed for efficiency, usually at the cost of extensive theming.  Thats not to say the Pecos is totally devoid of charm, far from it actually.
The main entrance and ordering area is on the sparse side of theming, relying heavily on the "shit on shelves" mentality of imagineering found throughout Disney parks. (and, basically anyplace considered well themed.)   But the dark wooden beams,  muted colors, and southwest inspired tile work all ties into the theme well, and set the tone for the restaurant. 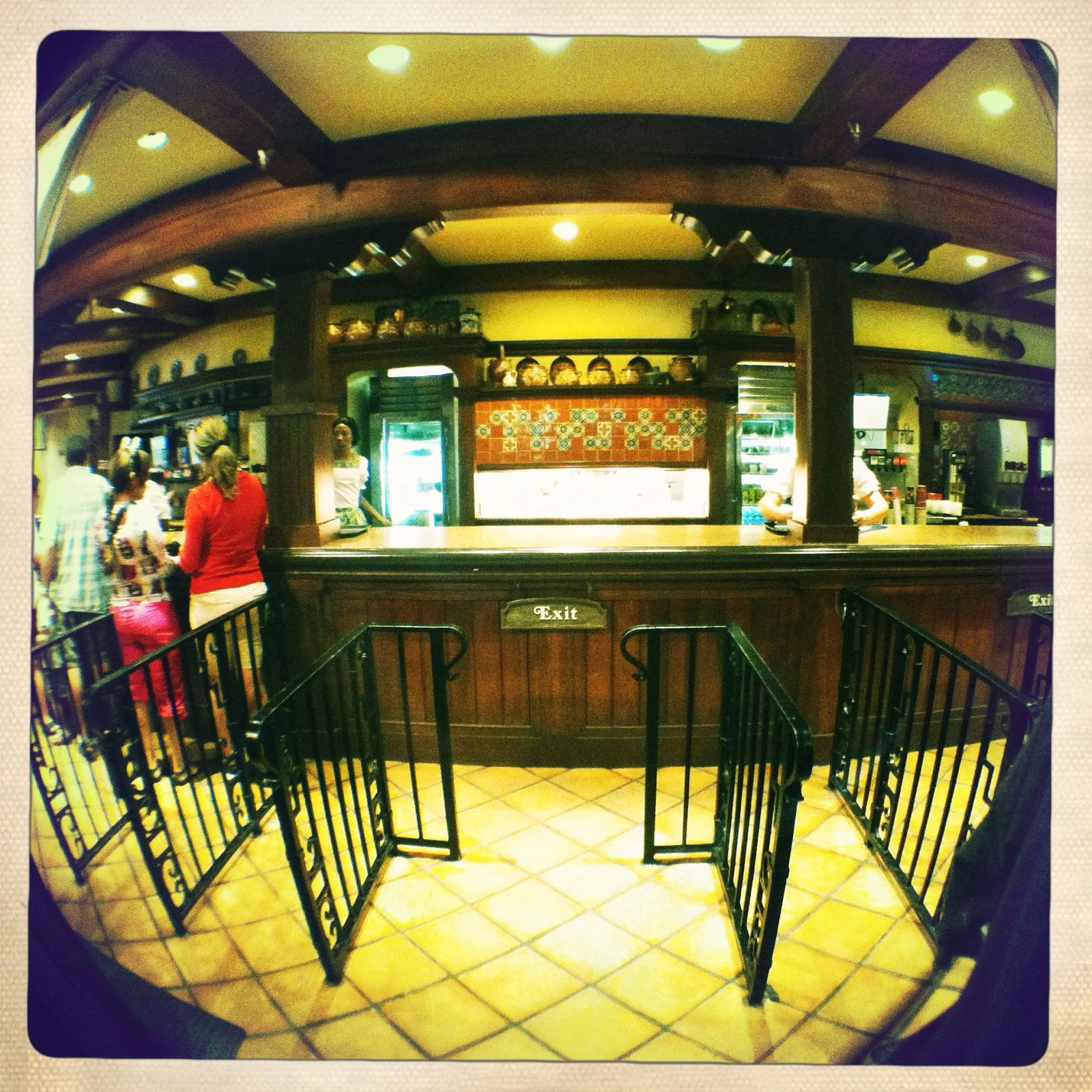 Found throughout the restaurant are black and white "portraits" of characters from the namesake Disney short featured in 1948's package film Melody Time.  Pecos Bill, Widowmaker, and Slue Foot Sue are all featured in these adorable portraits...even though they do seem a little out of place. Maybe have the same shots recreated by actual people and aged? Otherwise they're pretty adorable. 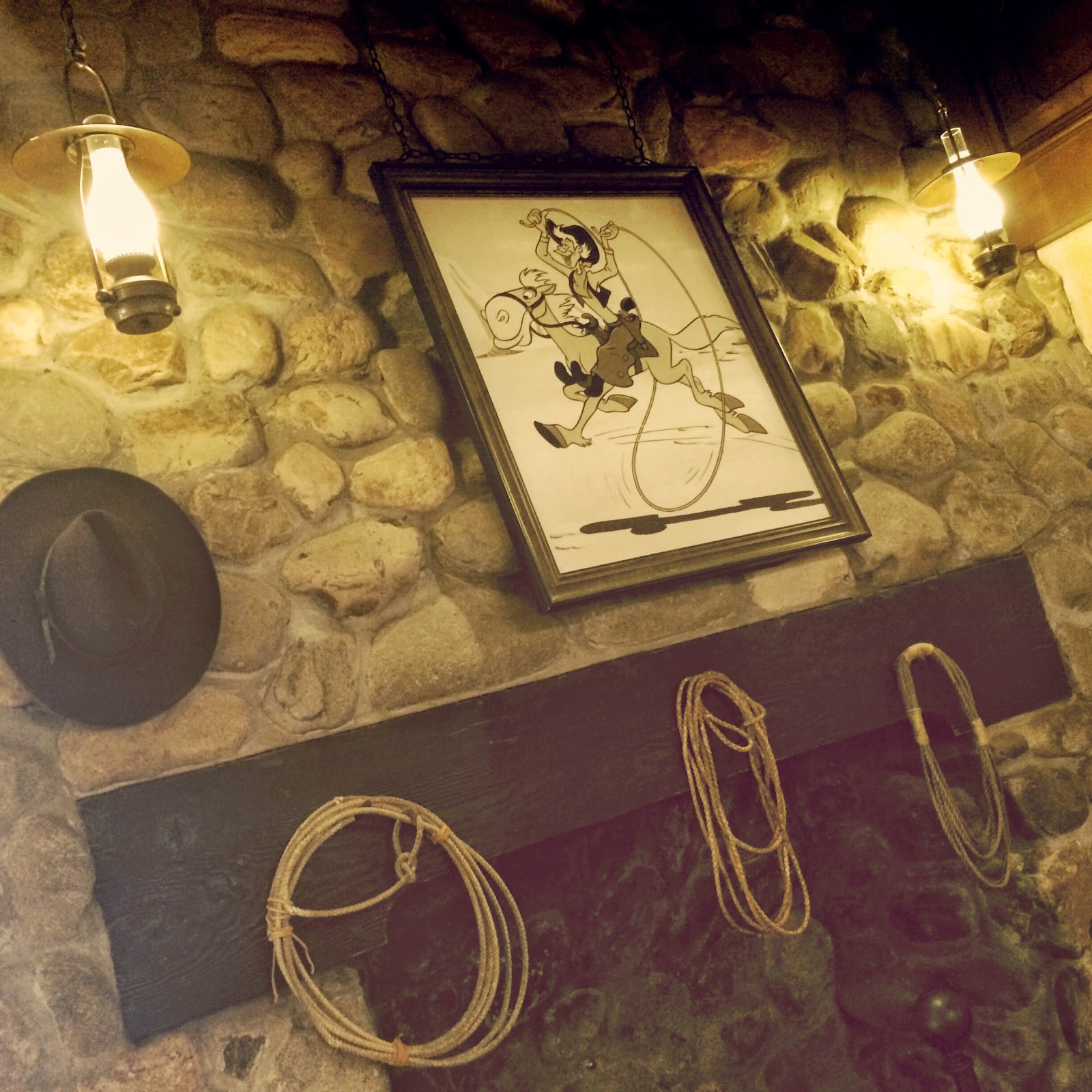 Notice the lighting in the above photo?  Lighting is key in setting the mood at Pecos Bills...and though I doubt anyone would ever refer to this space as romantic, it does get pretty close. 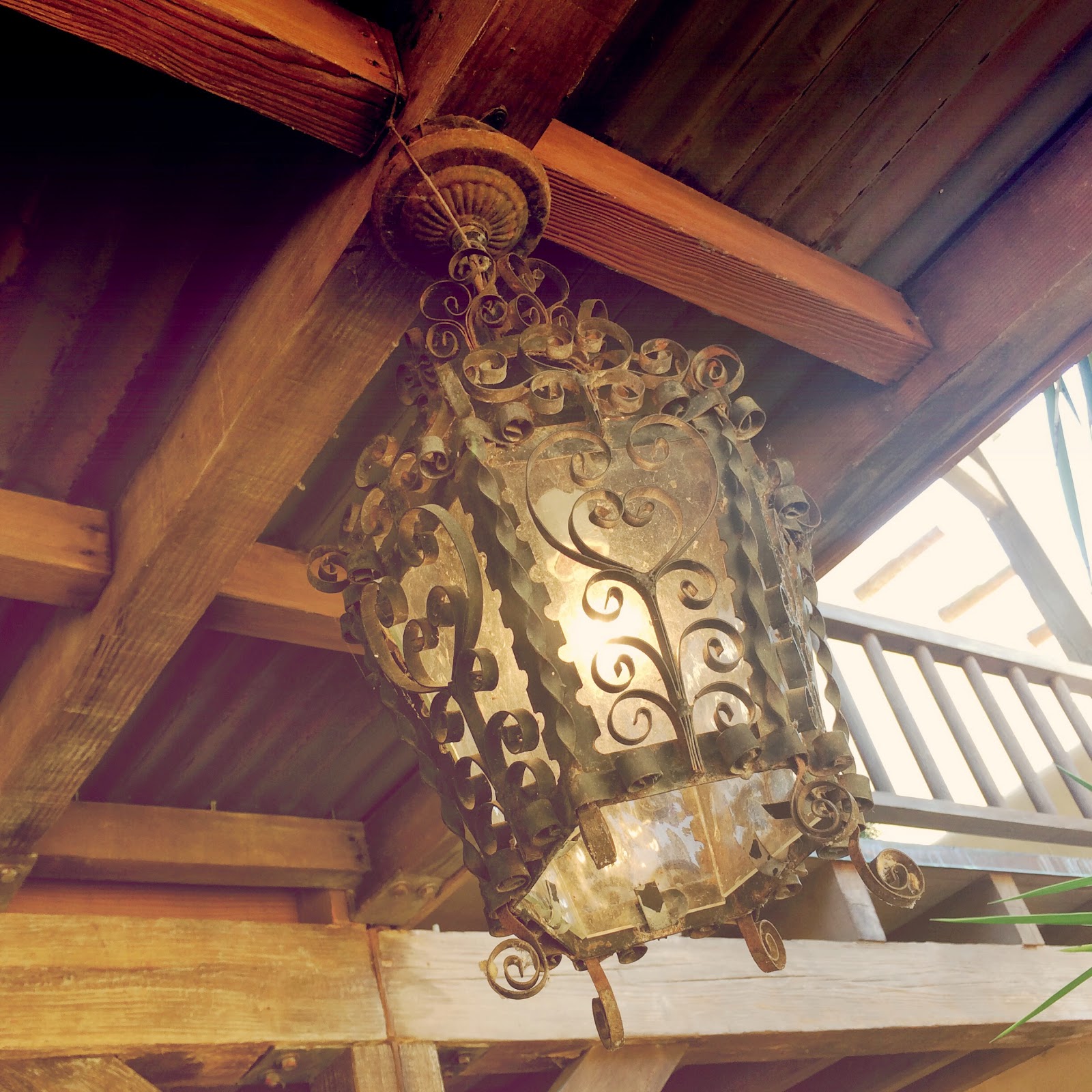 There are a few rather enormous rooms to choose from when dinging here, in fact, if you keep walking you will eventually end up in a Tortuga Tavern dining room, as there are not deciding walls between the two restaurants.  Most of the spaces on the Pecos Bill side are pretty boring, and can get EXTREMELY claustrophobic.  However, there is one very special room located here that is among my FAVORITE PLACES IN THE WHOLE WORLD....get ready... 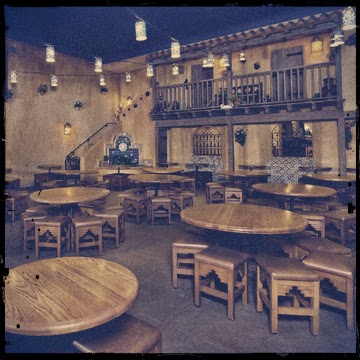 Themed to be perpetually twilight, (a trick Disney does often, and well...) this dining room is very dim and relaxed compared to the neighboring rooms.  It has become a tradition to start off our Disney World trips with lunch in this room.  One little side note, this room has absolutely the worst cell phone service in the universe...which forces you to converse with your partner.

It would be a shame to invest in this post without at least mentioning the food.  While I prefaced the post by mentioning how "meh" the food is, it does actually receive a pass based on the awesome toppings bar alone, behold, another view of beauty. 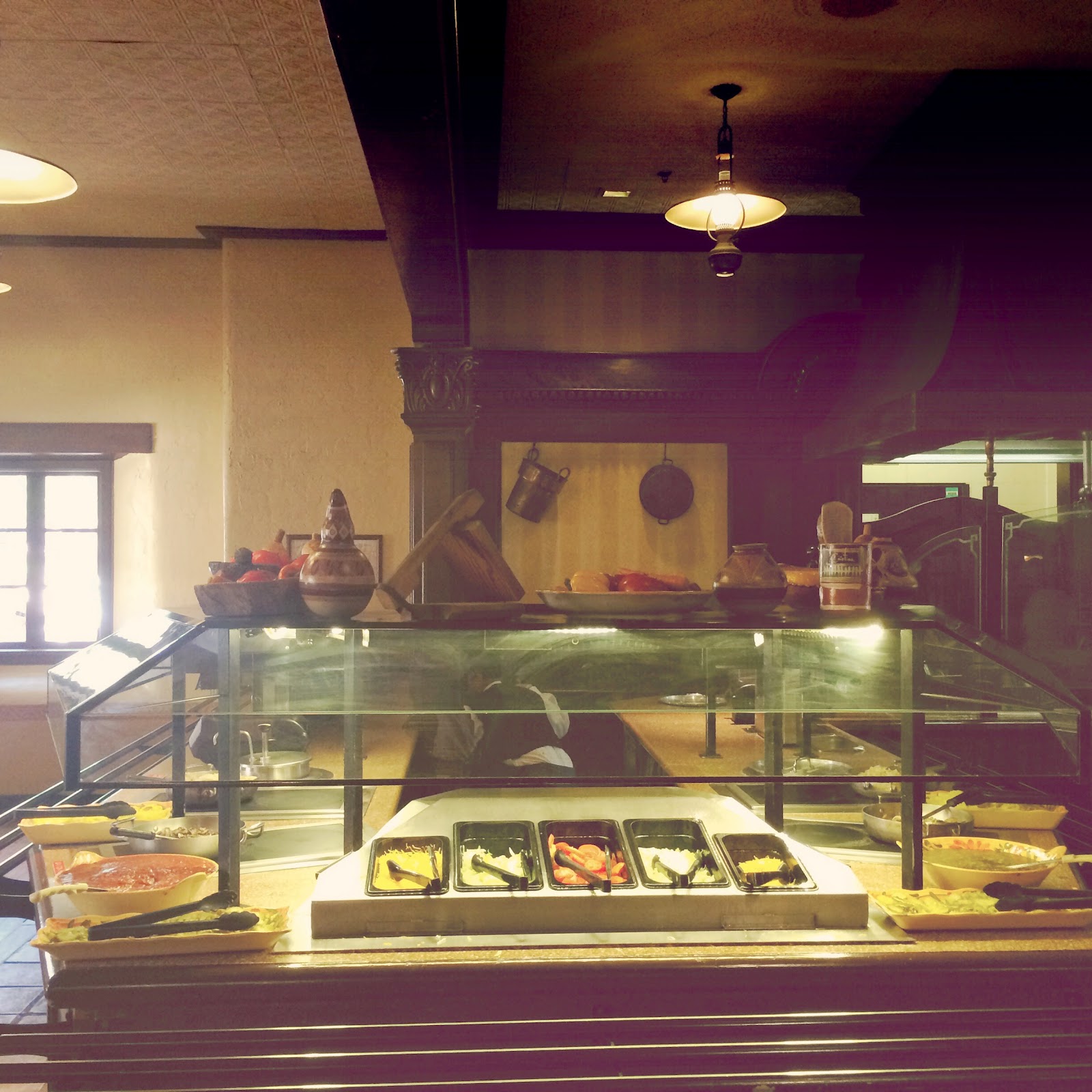 The menu consists mostly of burgers (and veggie burger...) and a couple salad options, but also has seriously good onion rings.  These items are all supplemented by the toppings bar, which includes your basic lettuce, tomatoes, pickles, and onions, but also sautéed mushrooms and onions, salsa, peppers, shredded cheese...and VATS OF DELICIOUS LIQUID CHEESE. I heart this stuff, and it reminds me of vacation. 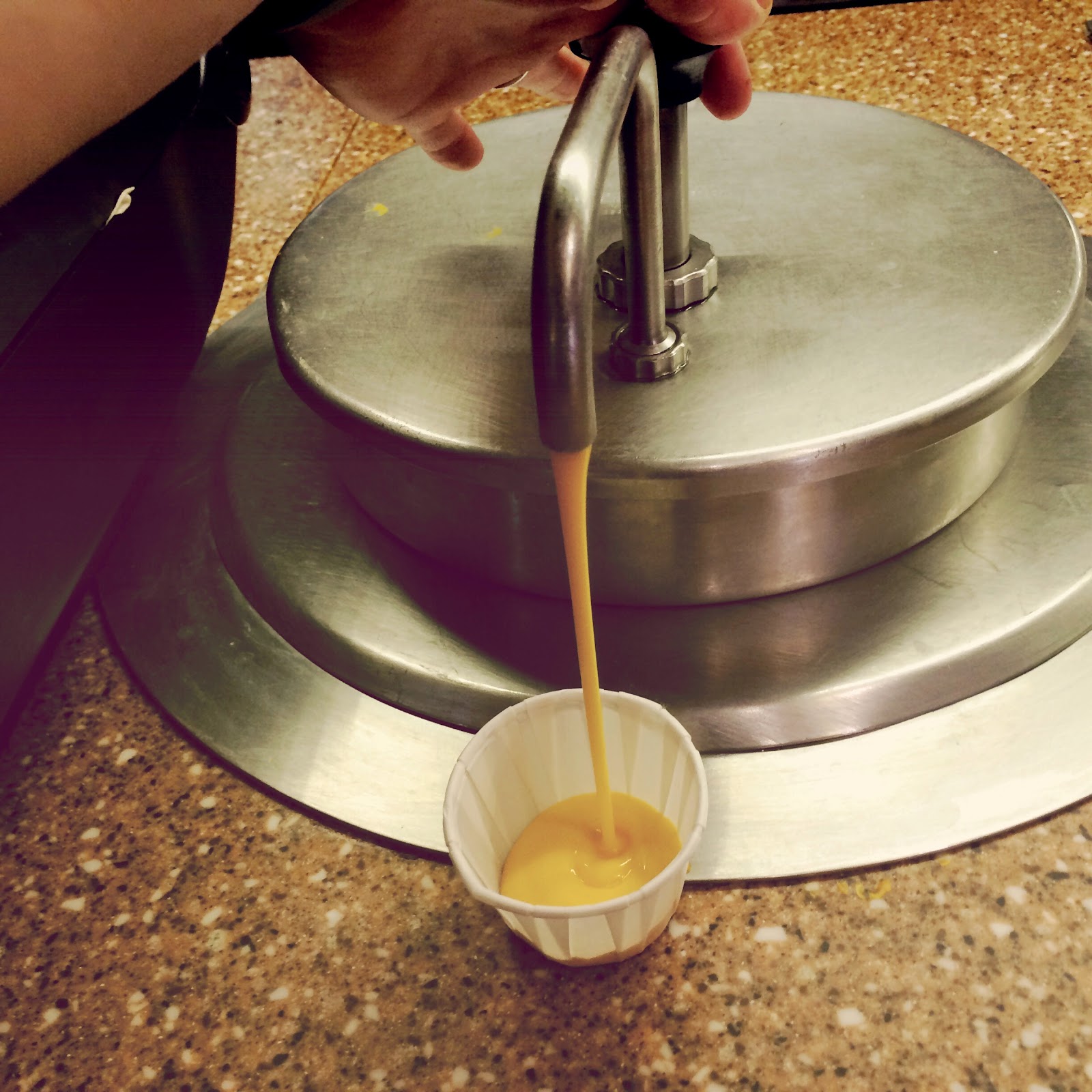 Adam and I split ONE VEGGIE BURGER and our plates en of looking like this...I know its kind of gross, but a tradition none the less.  To me, this meal is a thing of beauty. 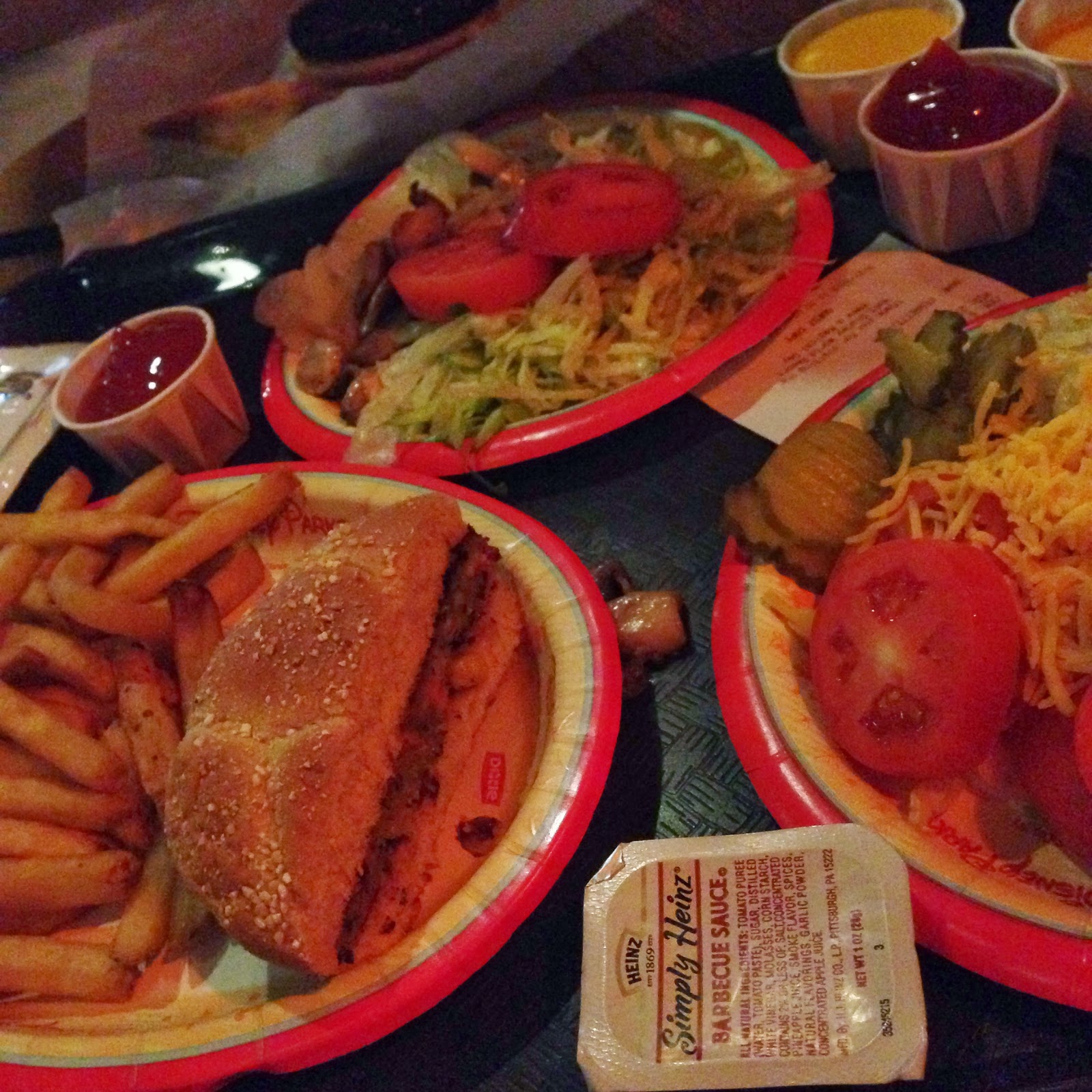 There you have it. Pecos Bill Tall Tale Inn & Cafe might not be the highest rated restaurant at Disney World, but it does have a few things working for it. If anything this place has earned a reputation as a reliable source of decent, inexpensive food, with a charming atmosphere. And given the turnover rate of guests, thats a pretty impressive feat.