Our Day On Castaway Cay

Going into it we already knew the highlight of any Bahamian based Disney Cruise is a day spent at Castaway Cay.  But like most other aspects of cruising we had a hard time figuring out what to expect from Disney's private island.  Online resources do exist, including maps and general reviews of the island and its amenities, but its difficult to fully prepare for such a strange concept.

We were expecting the ship to be fully docked when we woke up that morning. However, the ship was still in the slow process of docking as we ate breakfast at Cabanas.  This allowed us the fun opportunity to survey the island for a while, and (kind of) get our bearings.  After finishing breakfast we got ready to disembark the ship. While normally we like to be first in line for anything, we did actually take our time.  I didn't want to feel rushed on such a beautiful day on a serene island. You know? 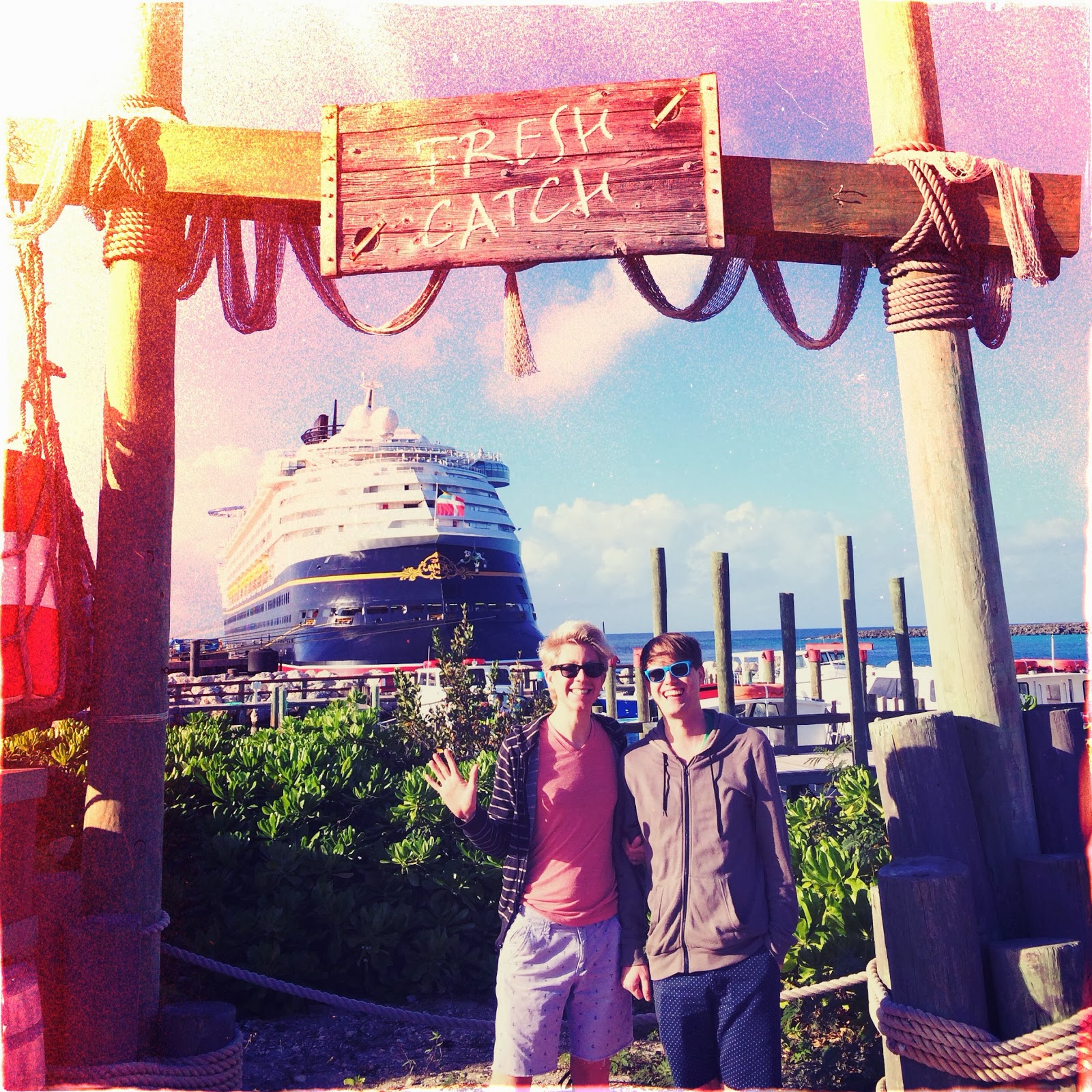 The dock area is full of photo opportunities, including Photopass photographers, and also includes the Bahamian post office, and boat rental area.  Because the dock is at the far end of the island Disney park style trams are provided…but if your up for a nice stroll I recommend walking.  The path is paved, and really gets you in the mood to explore the island. Plus, you get views like this… 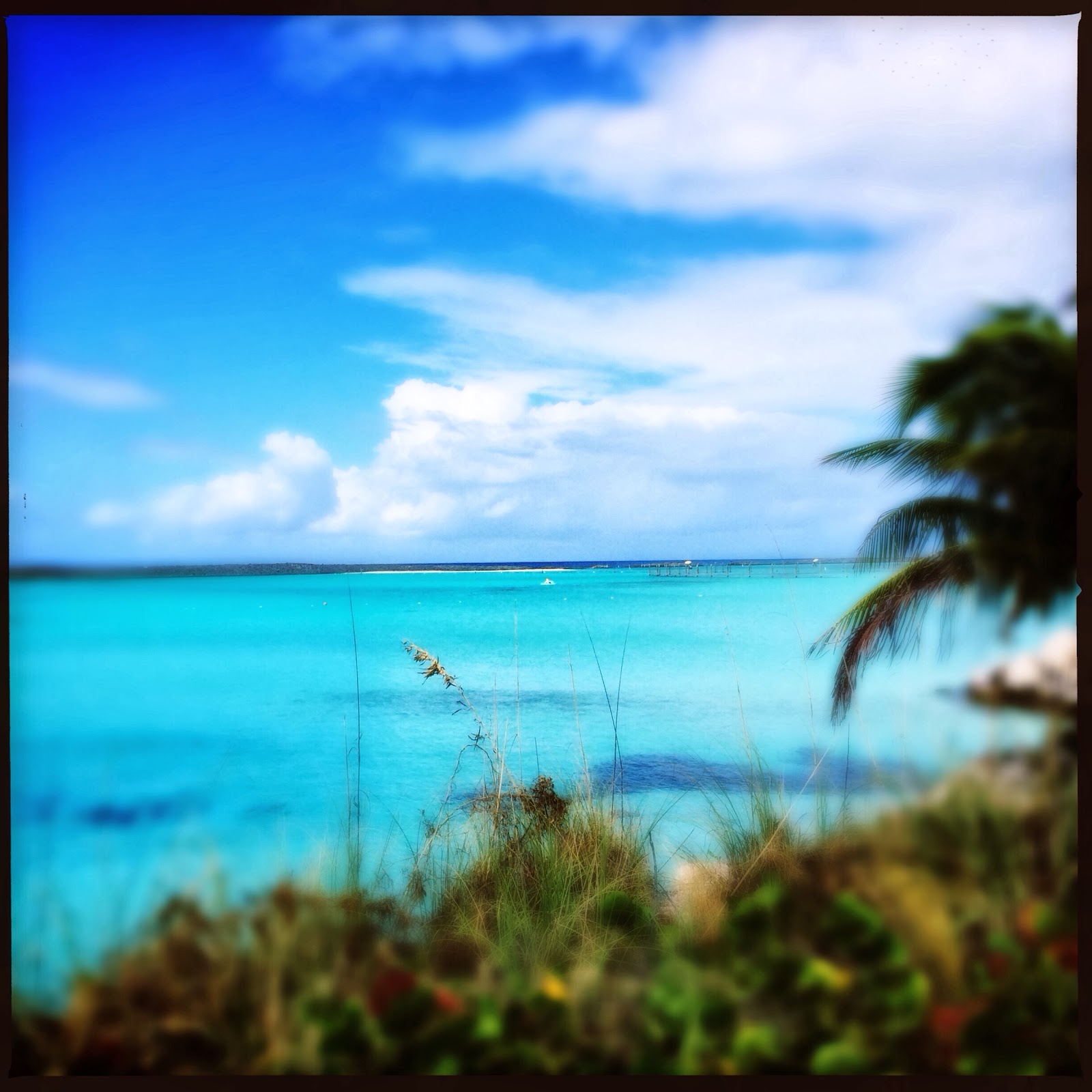 First on our agenda was picking up our bicycles, which we had reserved prior to our trip.  We somehow managed to be the first guests in this area of the island (I have really long legs…) and the Cast Member at the "bike shack" seemed genuinely surprised to see us there so early. 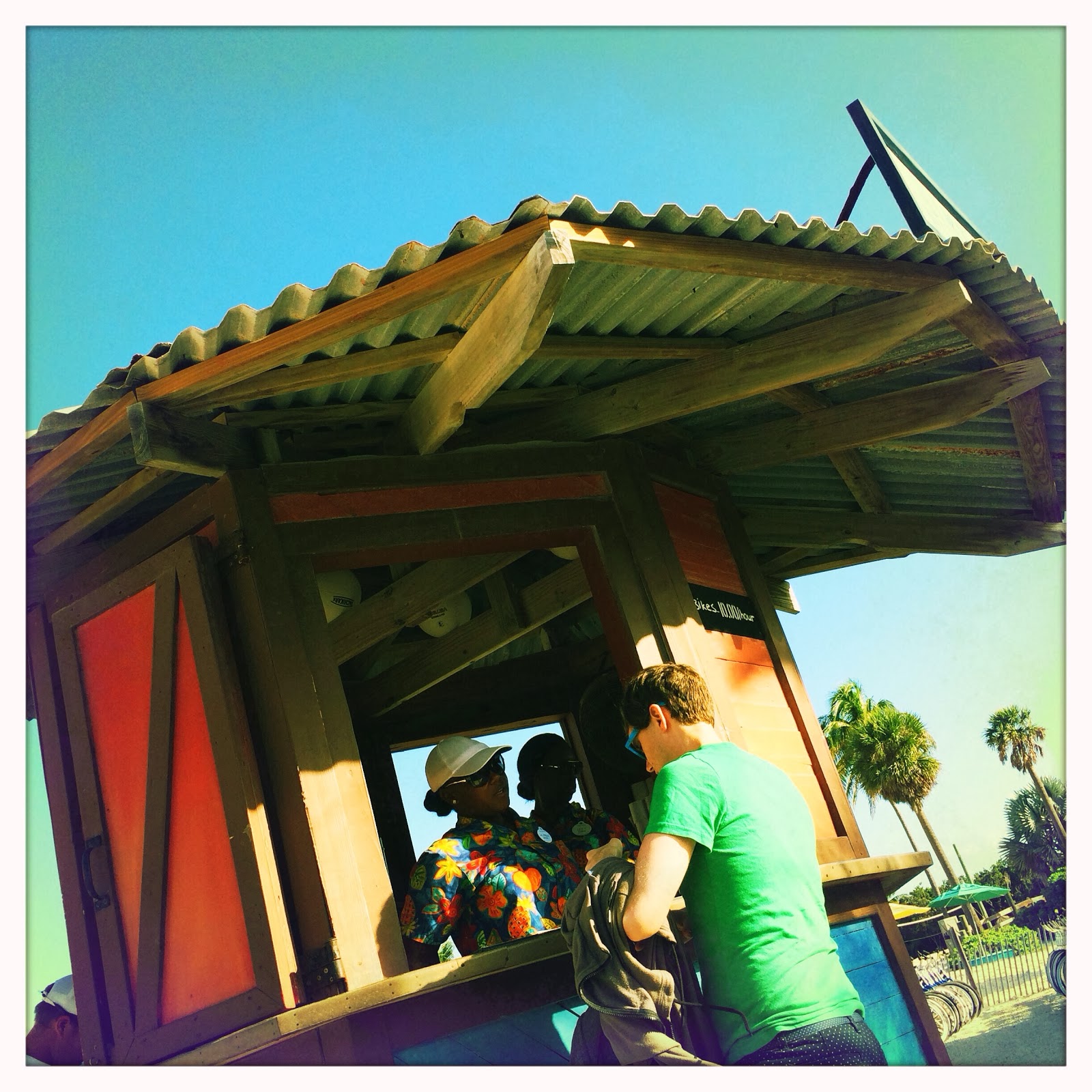 Though everything you read online says the bicycles are ten dollars an hour, there is no real way of them checking how long you've had the bike. (you can basically drop it off anywhere there is a rack…) So you can keep your sweet ride all day.  As the cheapest booking option on Castaway Cay, we recommend the bicycles very highly.  It was a unique and fun way to see the island, especially if you hate taking trams like I do. 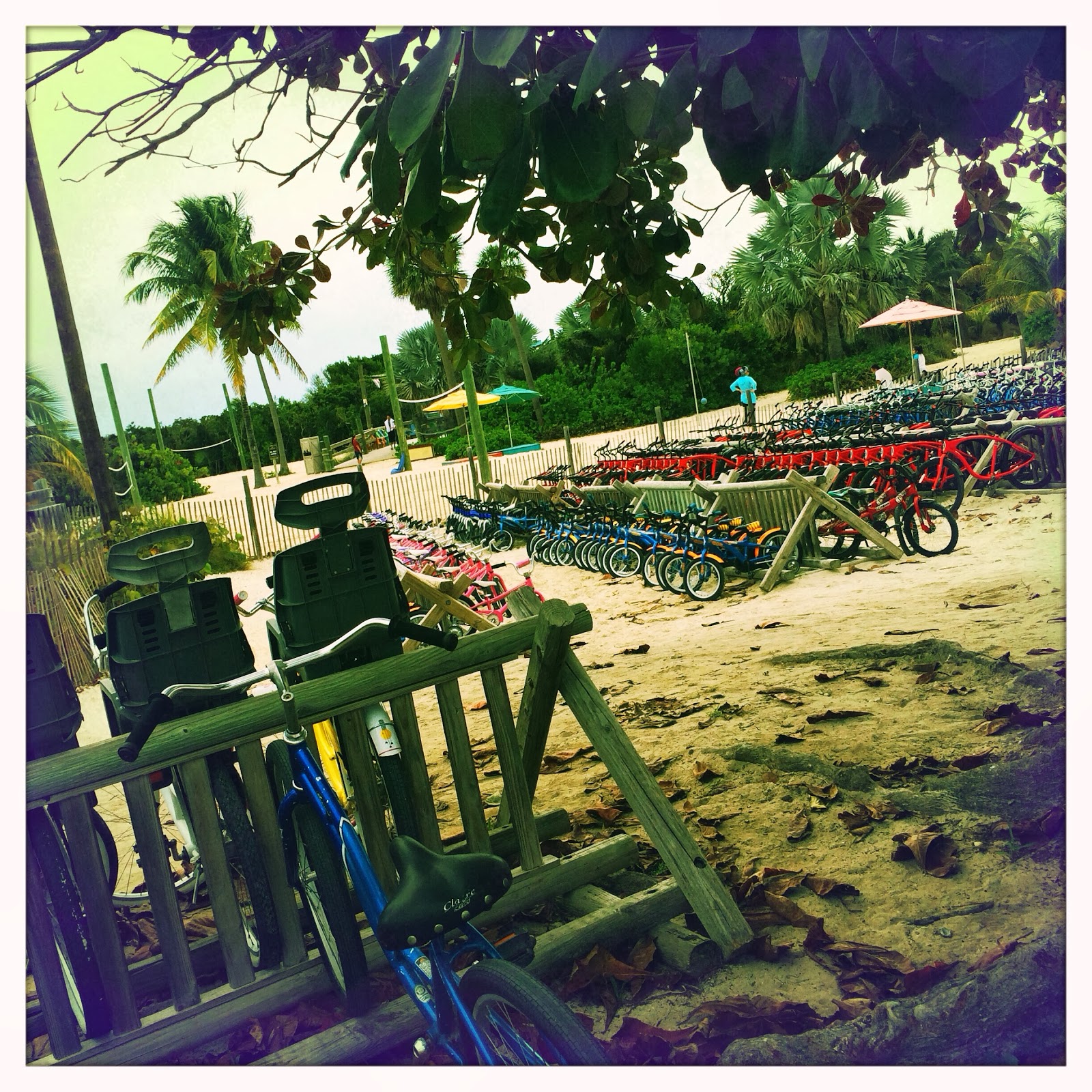 After getting our bikes we traversed the island, including the paths leading to the lookout tower located in the island's interior.  Though it was relatively easy on the bicycles,  I wouldn't recommend walking out there…especially on a hot day. Sheesh, it can be brutal.
Because we were the first folks to get bikes, we also happened to be among the first to get to Serenity Bay.  This gorgeous beach is an adults only paradise.  The 18+ rule is strictly enforced, unlike the adults only areas onboard.
We spent the morning collecting seashells and broken bits of coral.  I wasn't really sure if this was encouraged or not…but since I didn't see signs telling us otherwise, we went ahead and gathered a few handfuls.  The shells made a great souvenir of our time on the island. 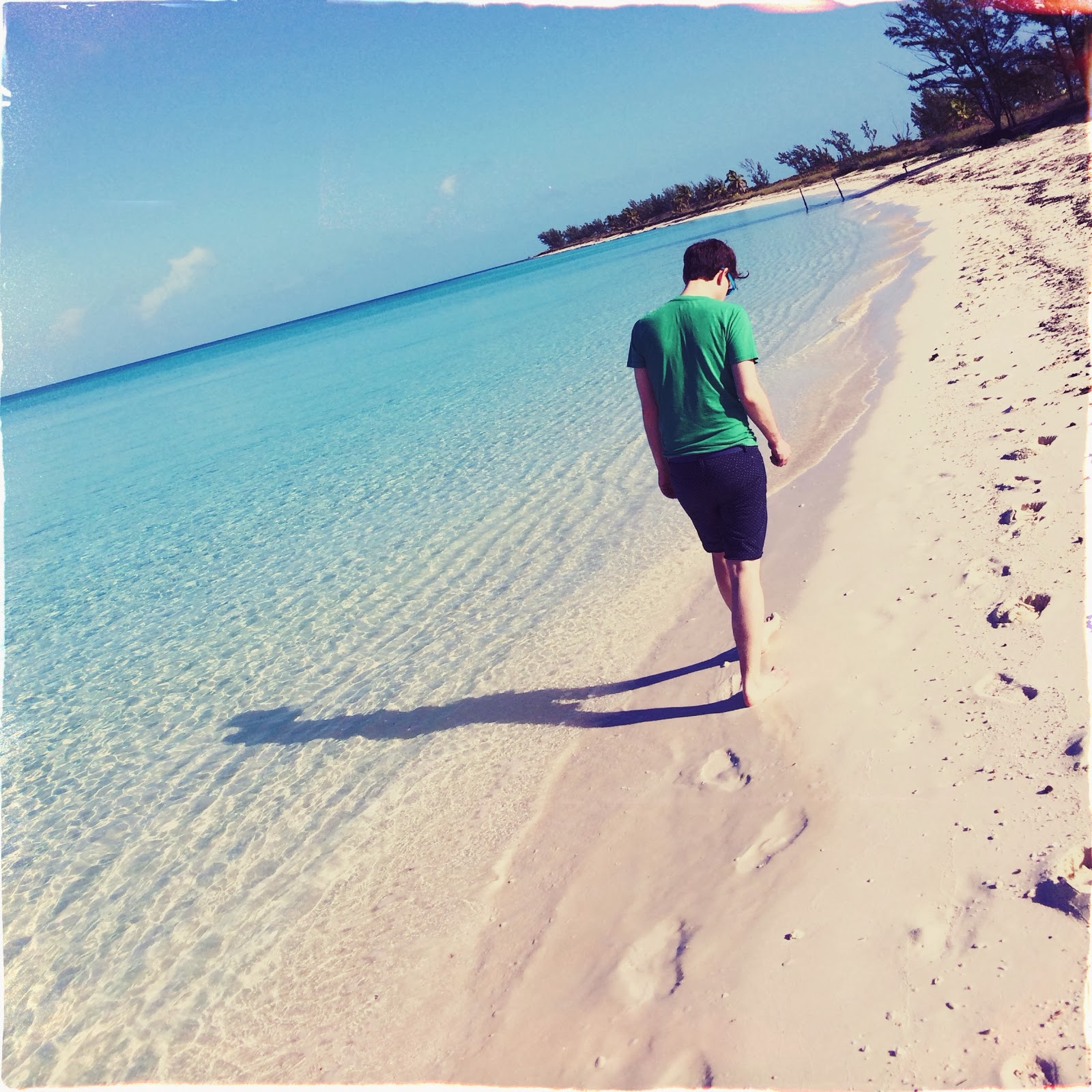 Serenity Bay is located on the opposite side of the island from the ship and the family beaches and amenities.  But worry not!  This beach is equipped with bathrooms, a restaurant serving lunch, a fully stocked bar…plus plenty of lounge chairs and umbrellas.  I want to reiterate that everything here is adults only, even the restaurant.  You could easily spend the entire day lounging around Serenity Bay.
Looking back, this is seriously the closest thing to heaven on earth. 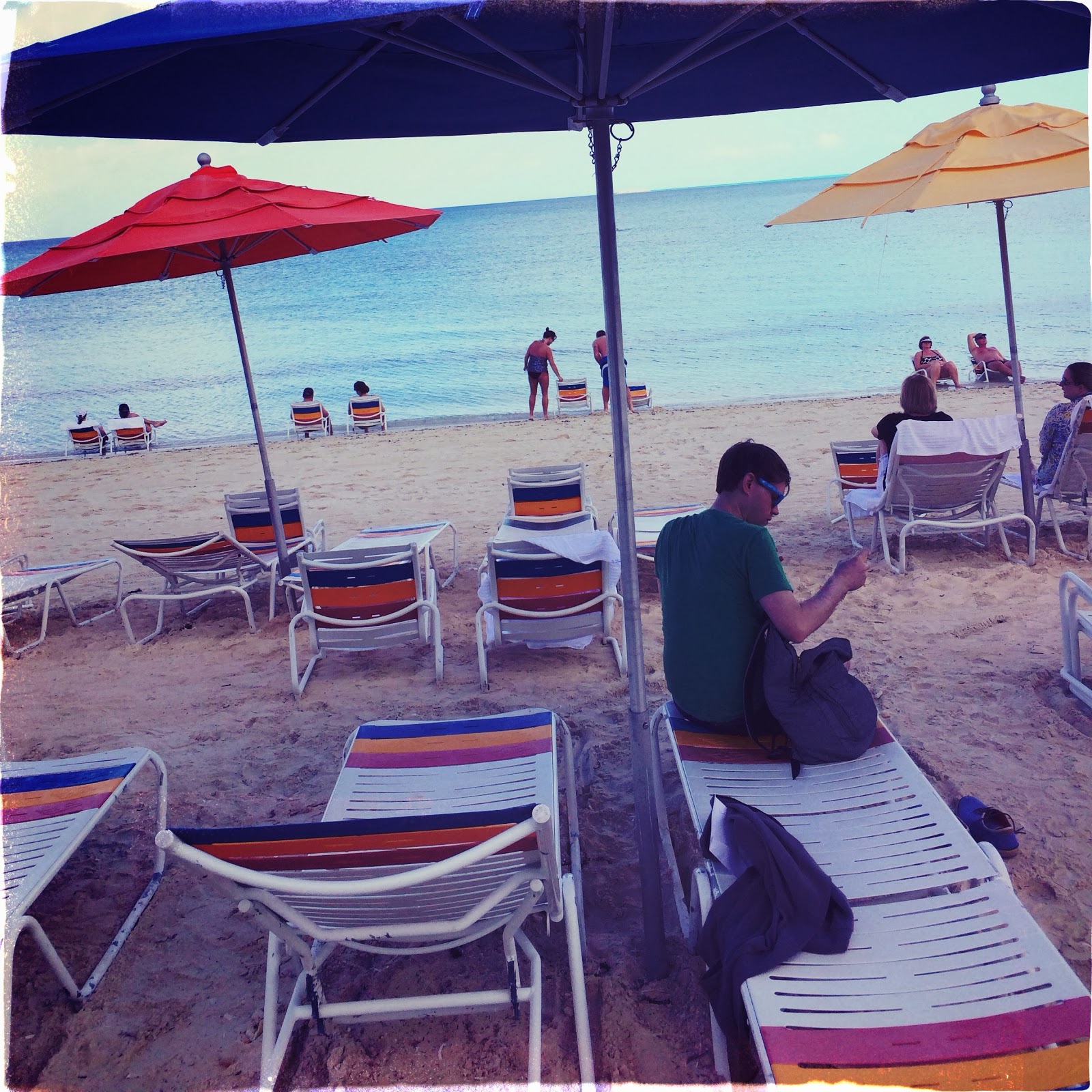 Never the "relaxing types" Adam and I got antsy and wanted to explore the family areas of the island.   We jumped on our bikes and headed over the to the more populated areas of Castaway Cay. 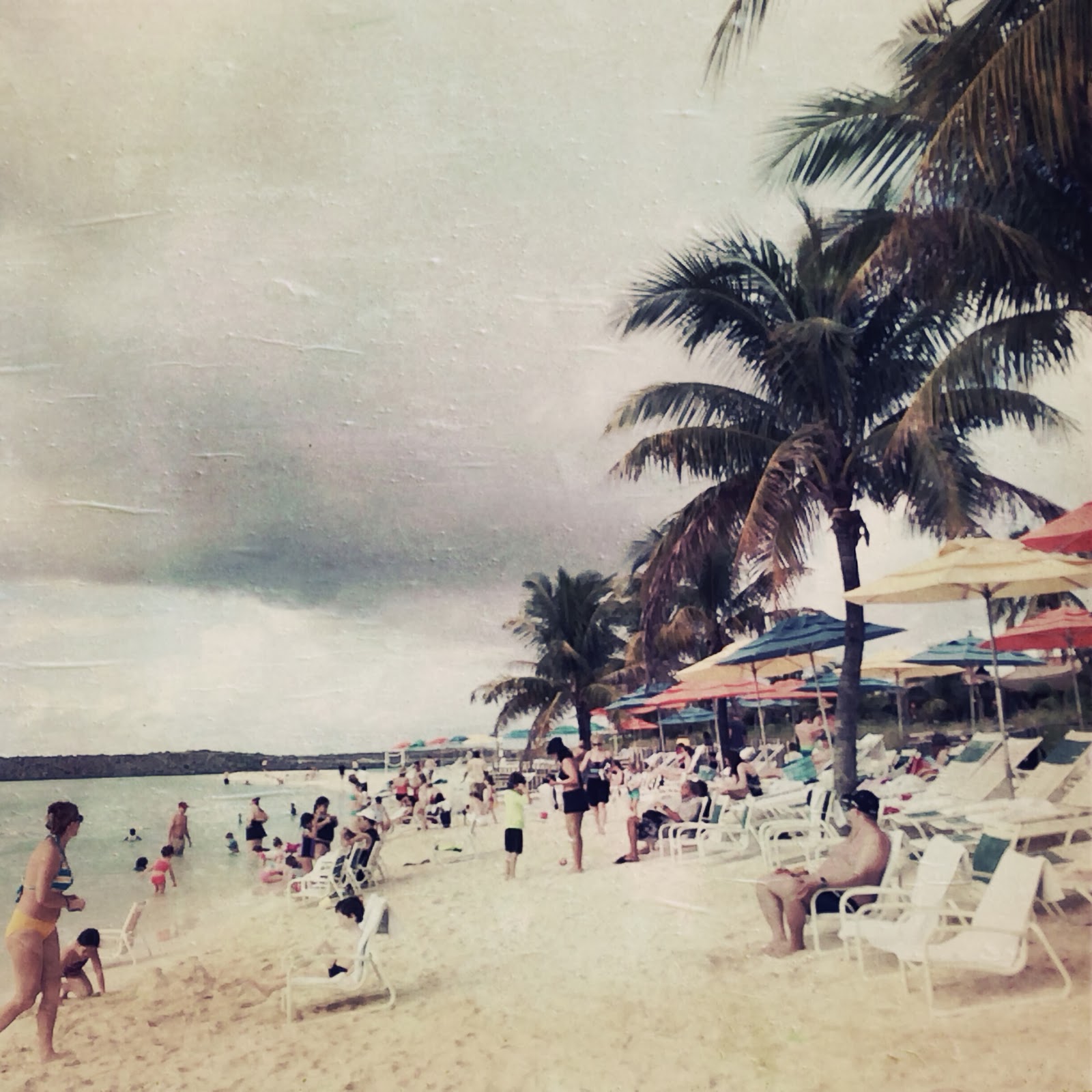 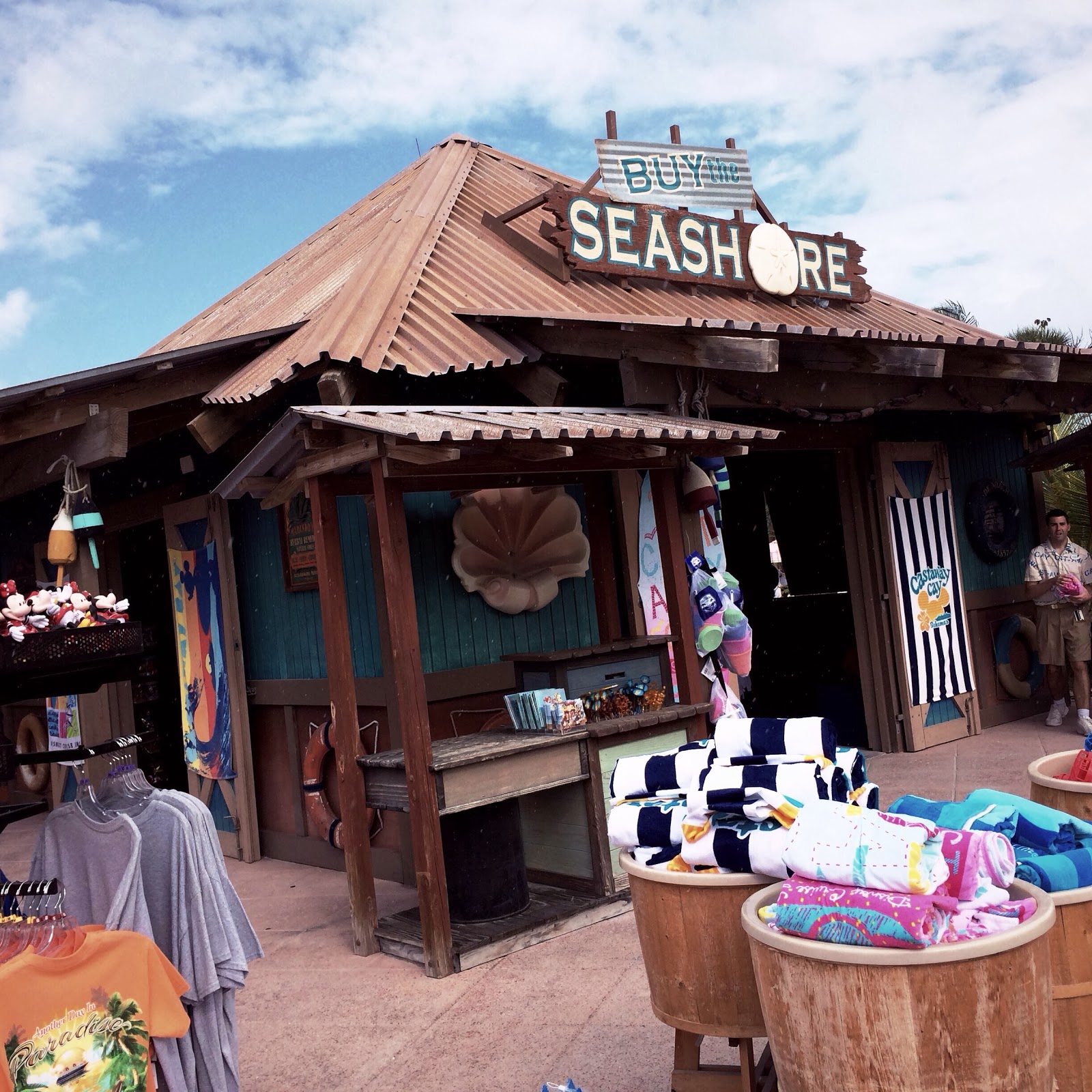 No Disney experience would be complete without shopping, and Castaway Cay is no exception.  During a very brief downpour we explored the few shops on the island.  In addition to basic need items (sunscreen, towels…) there is an abundance of cruise specific merchandise.  I know they make great souvenirs, but I honestly thought most of this stuff was pretty ugly. 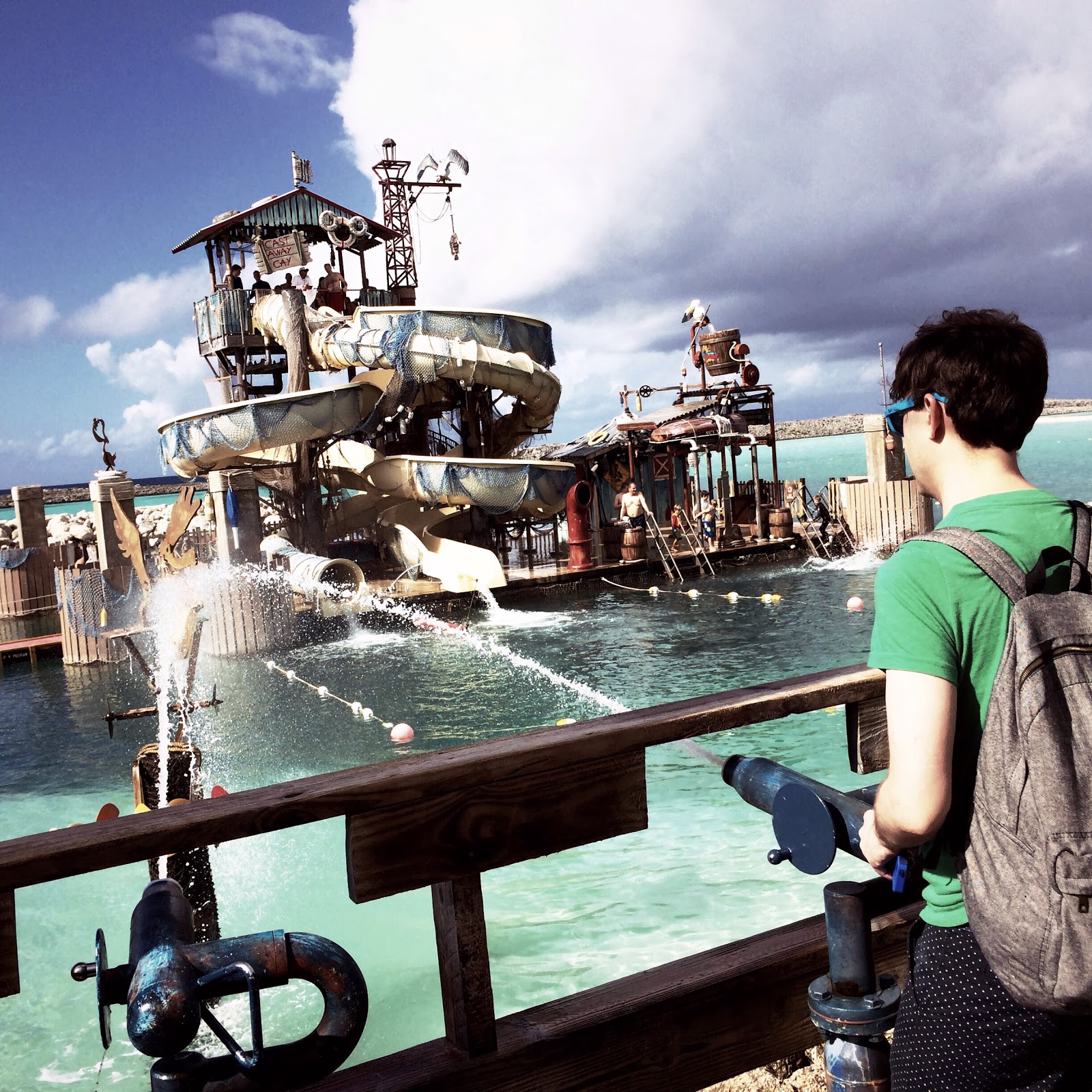 A few years ago Castaway Cay acquired some fun new additions, including Pelican Plunge!  This water play area includes two slides, powerful water guns, and orchestrated leaks galore.  And though its probably geared toward children Pelican Plunge is open to everyone. 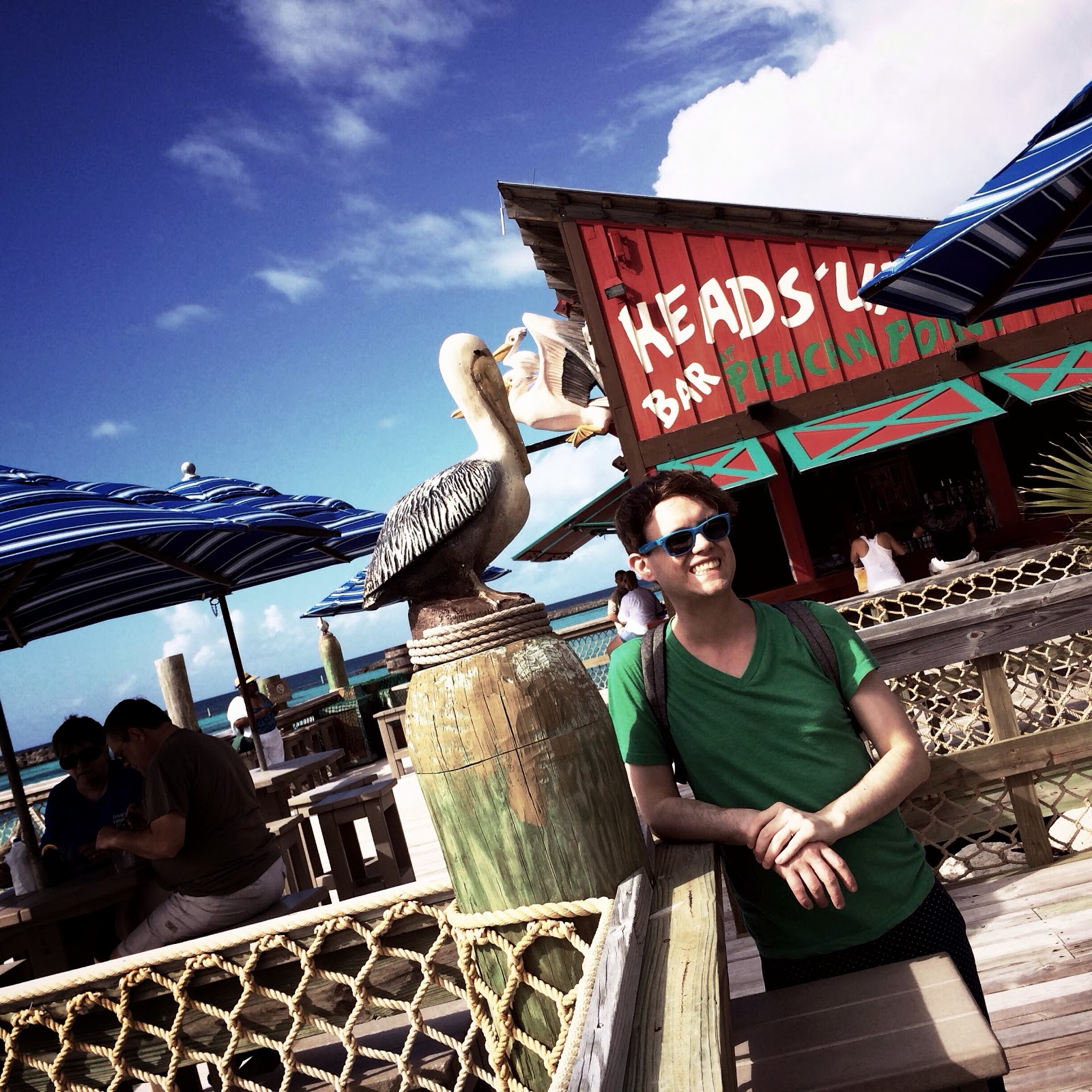 At this point your probably wondering about food on Castaway Cay, right?  Well, I have good news and bad news.
There are three restaurants on the island.  Cookie's BBQ, Cookie's Too BBQ, and the adult only Serenity Bay buffet…which I can't find a name for. (anyone?)  All three restaurants are buffet style, as they should be.  But they all serve the same basic bbq style food. 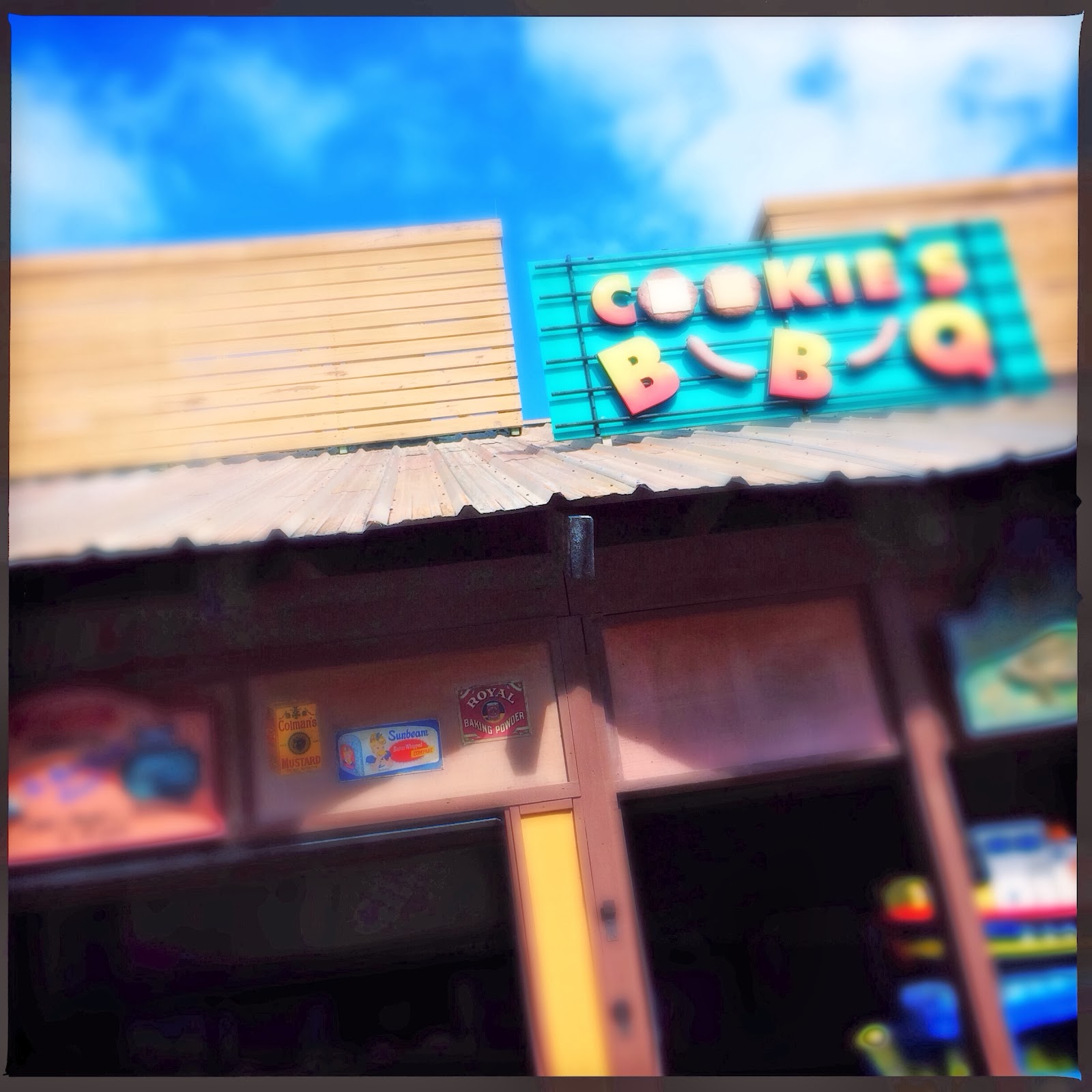 You certainly won't go hungry on the island, but you're much better off going back to the virtually empty ship and eating lunch at Cabanas.  Though we did just that, we also wanted to try the island food…you know, because were good reporters. :)
Vegetarian options included baked beans, corn on the cobb, potato salad, coleslaw, couscous salad, and herbed focaccia.  The plate of food below was shared by the two of us, and is the definition of blah.
In addition to the three restaurants there is also a a couple of very well stocked fruit carts!  I thought this was a great idea, especially for vegetarians.  There are also soda/water stations throughout the island, which are included with the cruise. 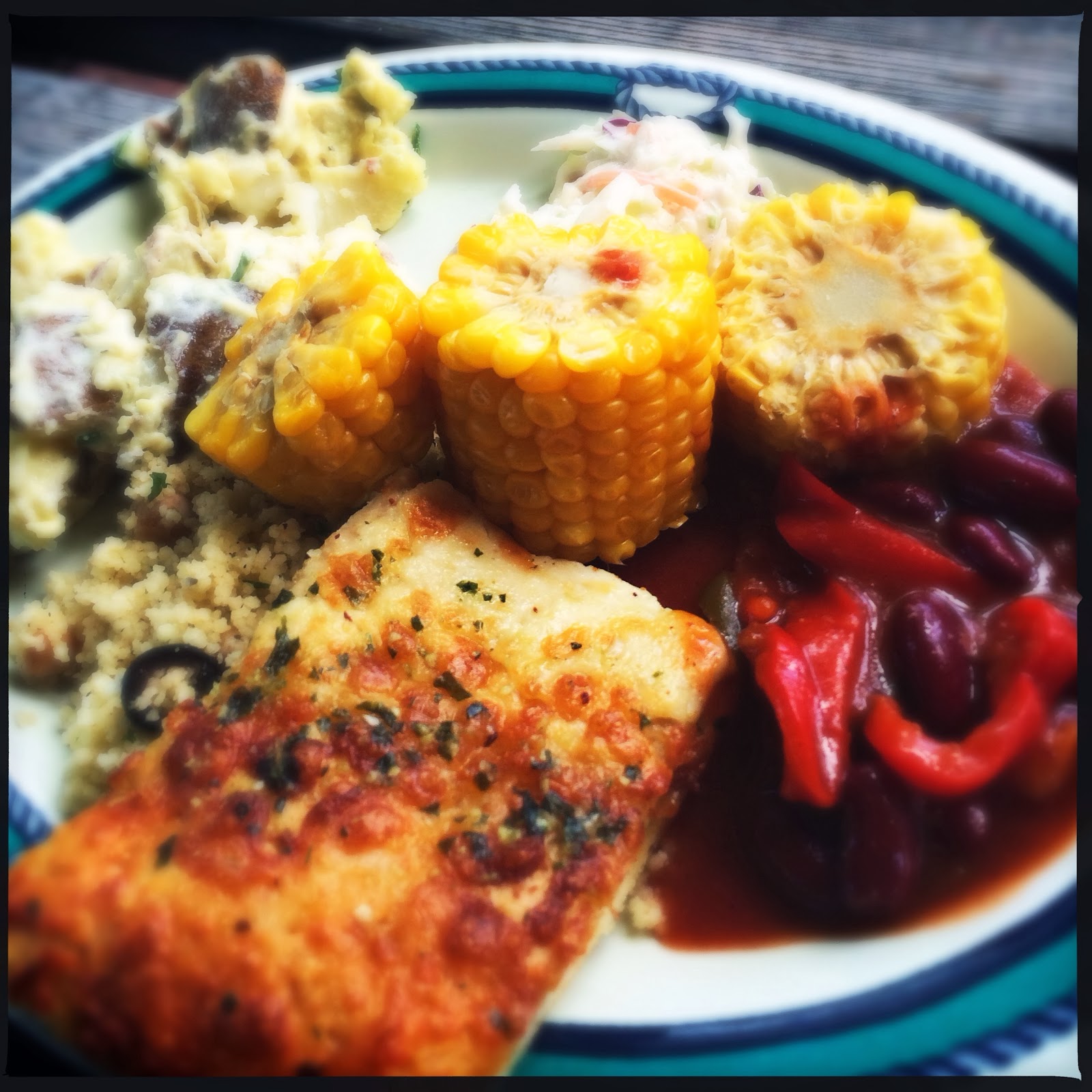 Clearly I wasn't leaving Castaway Cay without a few drinks!  While I enjoyed beer for most of the afternoon, I knew that I had to have the islands signature Konk Kooler! (I've been reading Eating WDW's reviews for years…)  This frozen cocktail is a combination of rums, pina colada, orange, and guava... 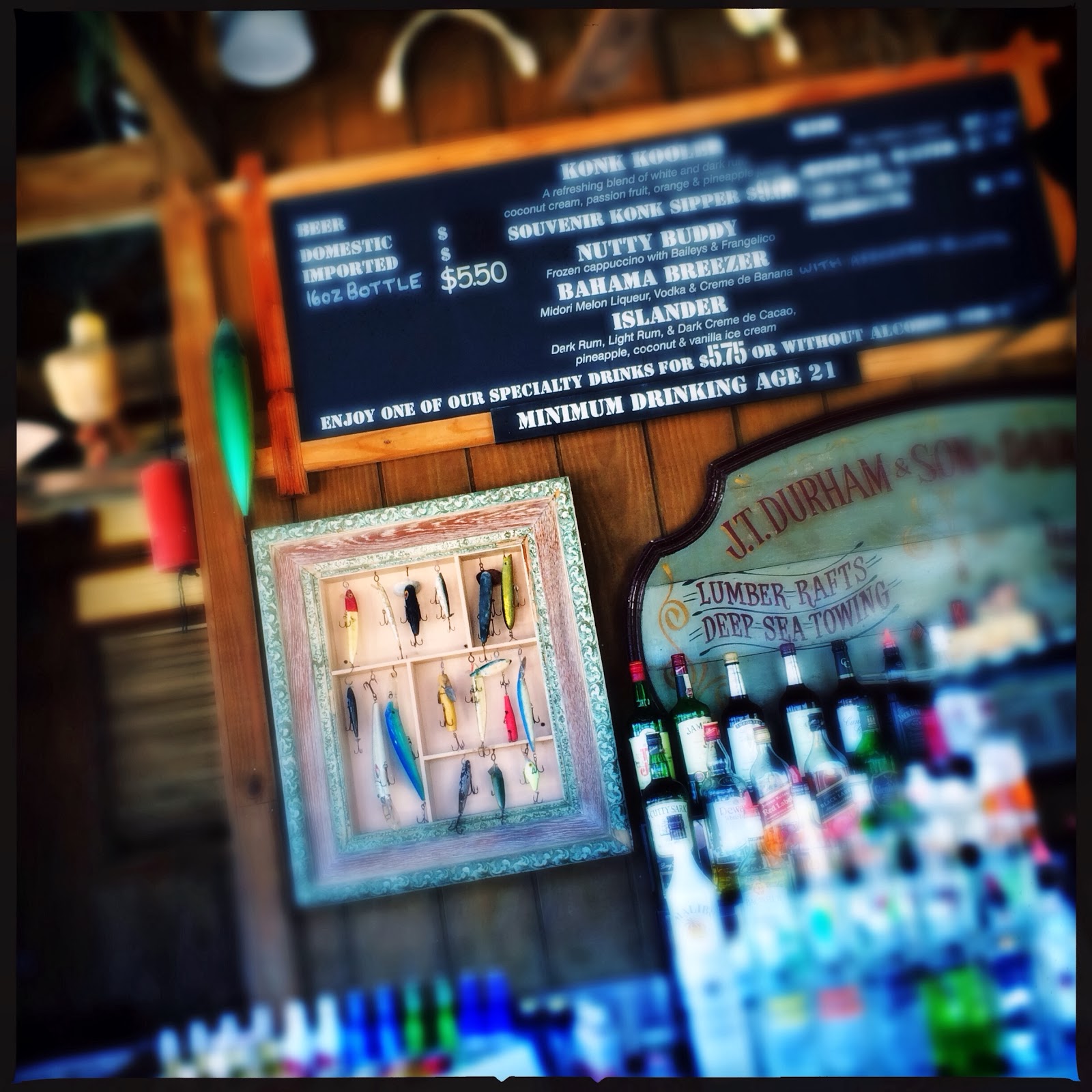 I ordered this at the bar at Serenity Bay, as our time on the island was coming to an end. You can probably guess that the drink was a little too sweet for me…but you know what?  Take a gander at the photo below.  This drink was the perfect way to end our day at Castaway Cay. 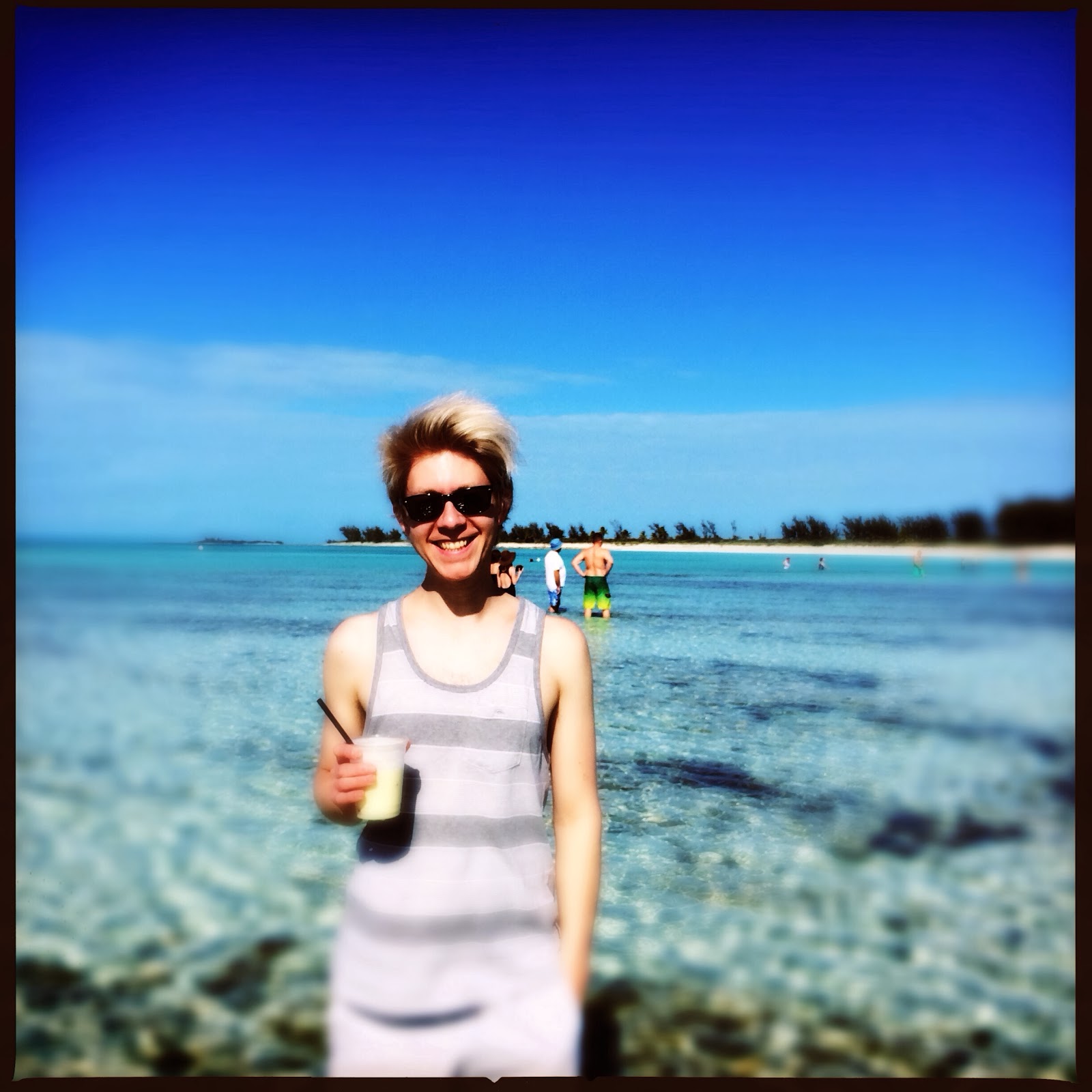 There it is. Our magical day on Castaway Cay.  As a Disney fanatic this was one of the things on my ultimate bucket list, and it couldn't have been more perfect.  Every aspect of the island is drenched in Disney perfection, without being overtly Disney. Its weird, how I felt as comfortable on Castaway Cay as I do in The Magic Kingdom, without ever having been there before.  That warm, welcome embrace of Disney created environment…plus rum.