All About Characters On The Disney Cruise Line

When we set sail on our first Disney Cruise this past January we had prepared as much as a novice cruiser could. Read books and blogs, and also asked people for personal advice.  One part of the Disney Cruise Line experience that we were not fully anticipating was character meet and greets.
You probably know, as a reader of Disney Hipster Blog, that we live for character meet and greets at Walt Disney World.  So why would the cruise be any different?!?  We knew we had to meet every available character, and get pictures in their various cruise outfits.  I know it sounds silly (and it is…) but this was probably the most fun part of our time on The Magic. 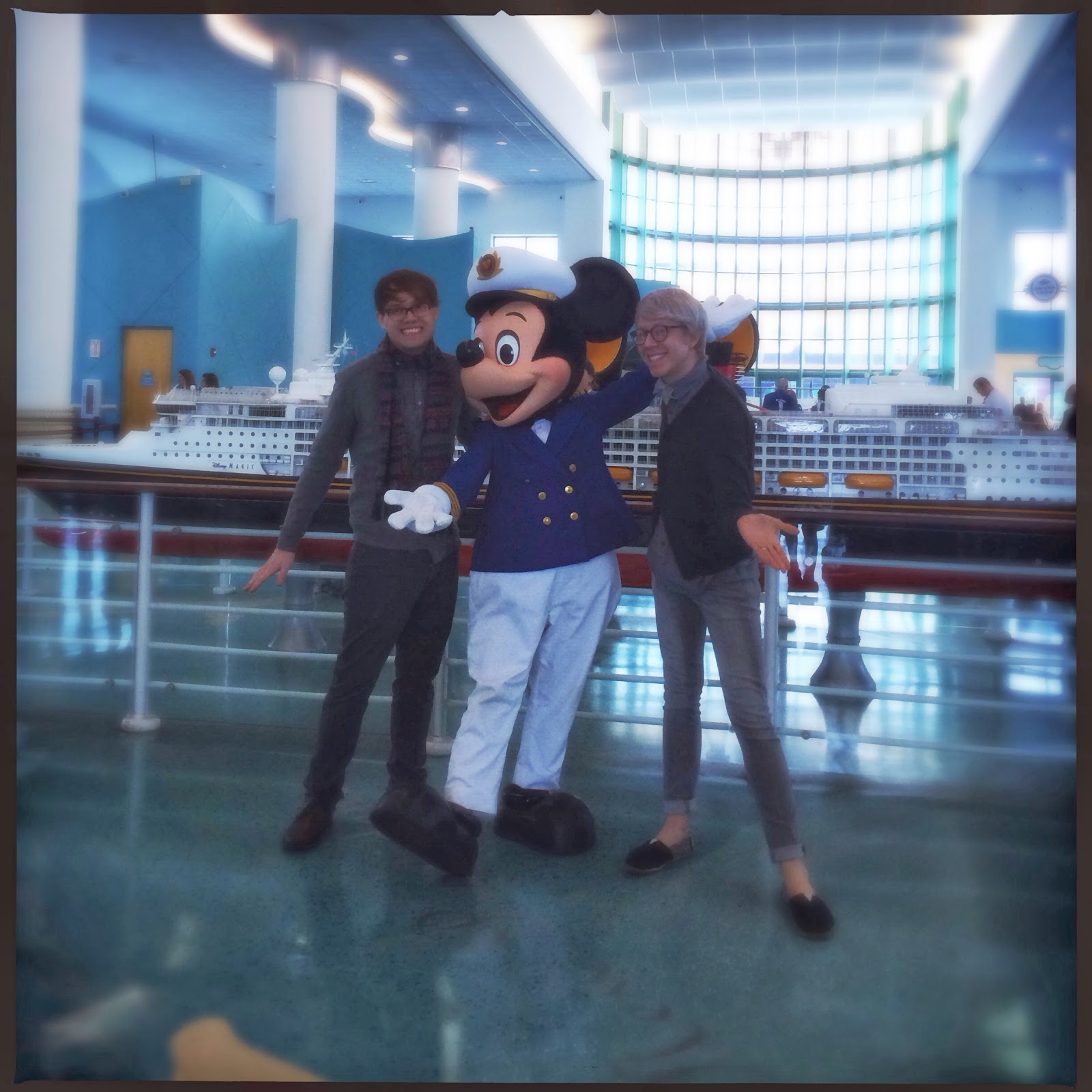 The fun part is that character meet and greets start before you even get on the ship!  While waiting in the terminal both Mickey and Minnie usually make appearances!  Mickey is all decked out in his captains uniform…ready to embark.
Once on the ship the character schedule will be included on your personal navigator, and run almost continuously from around 8AM to 10PM.  The location of the characters does vary, but the majority are located in the atrium on either deck three or deck four.  The more popular characters (princesses, Mickey, Minnie…) are usually on deck three. Demand for these characters can create a substantial line, obviously…and we suggest showing up earlier than their scheduled time. 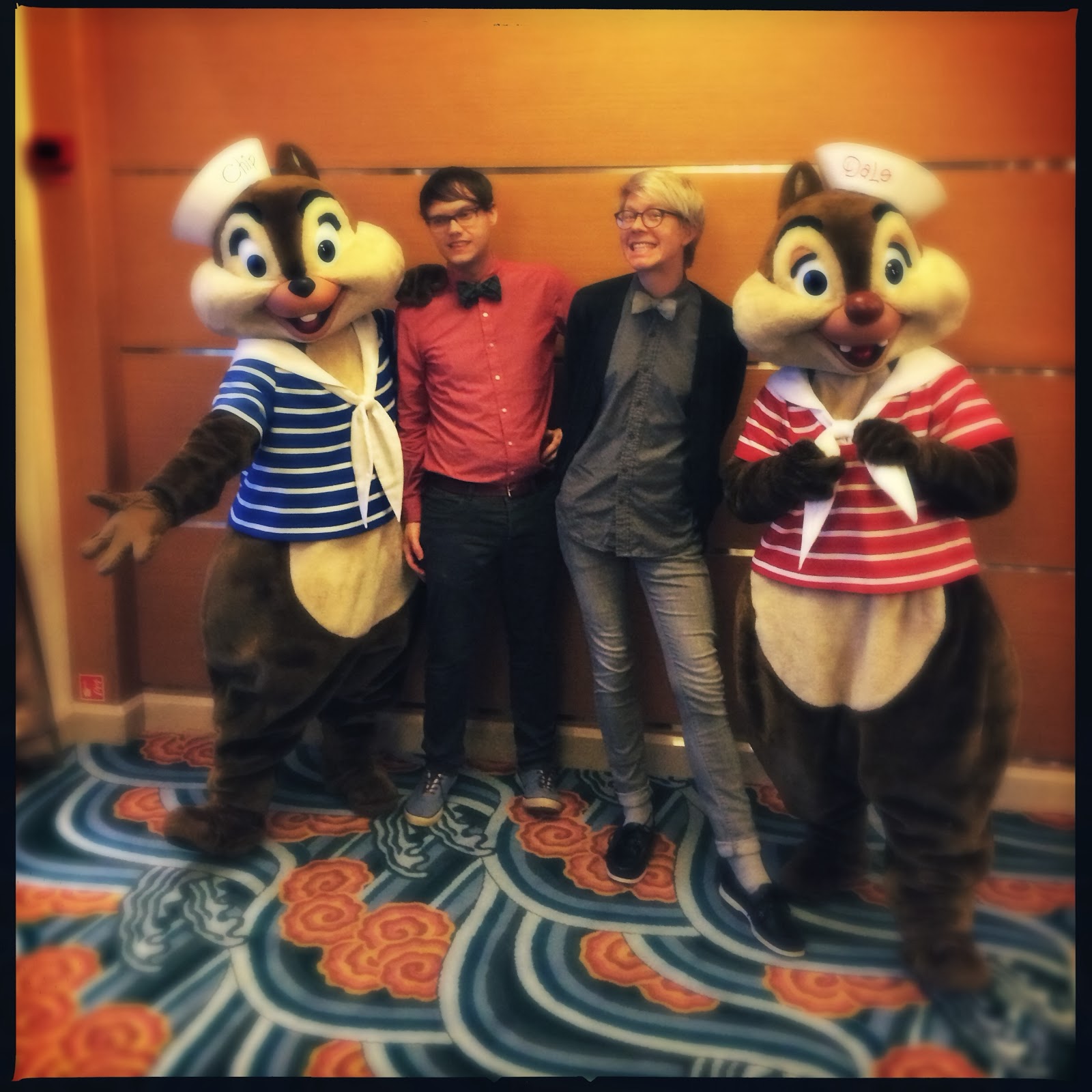 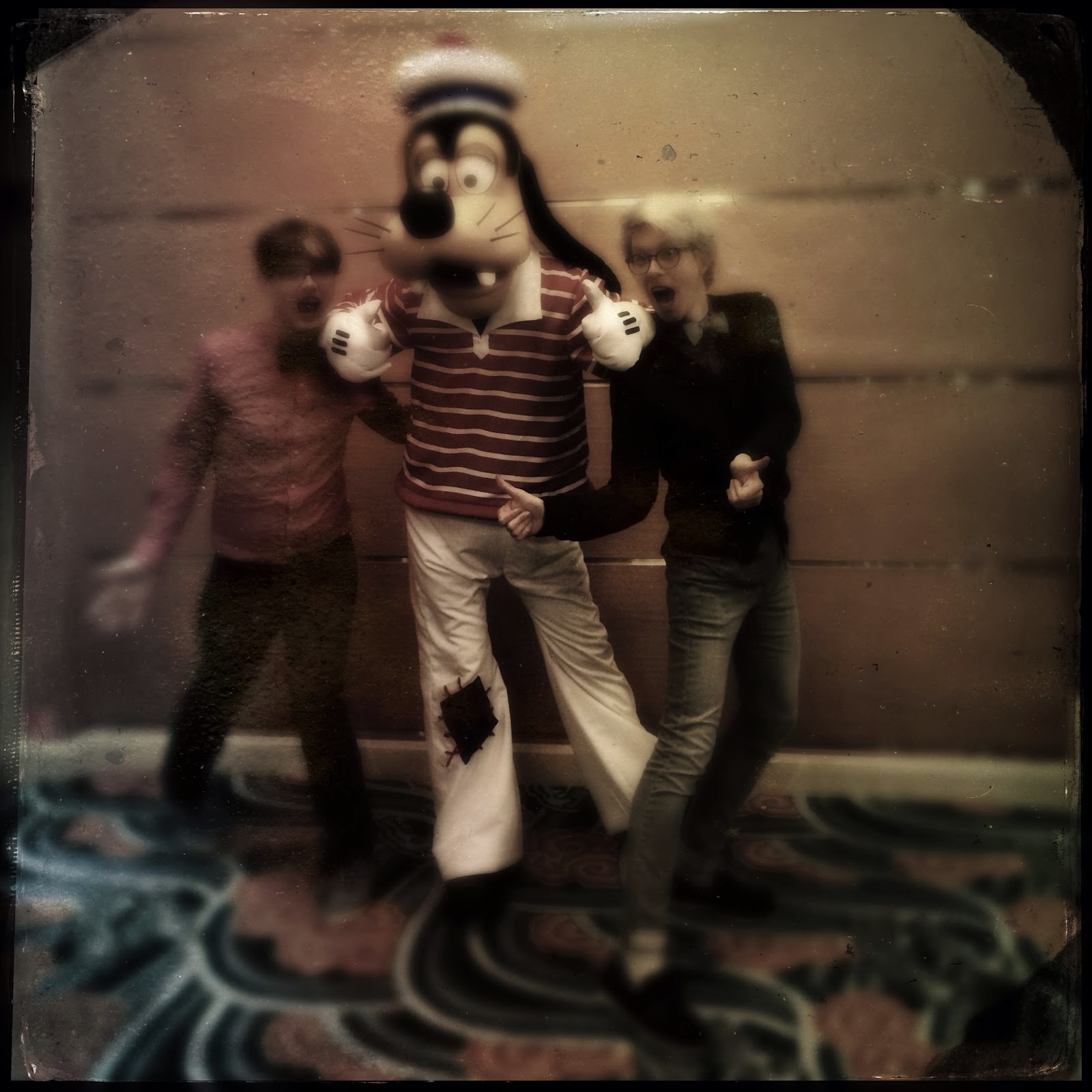 Most characters who meet on deck four have much shorter waits.  I doubt we waited longer than ten minutes for any character on this deck.  Here you will often find Donald, Goofy, Stitch, Jake, and Chip & Dale.   It can be hard to find time to meet all characters, especially those whose schedules conflict with others.  Make sure you pay attention to your Personal Navigator, as some characters might make a single appearance over the course of your cruise! 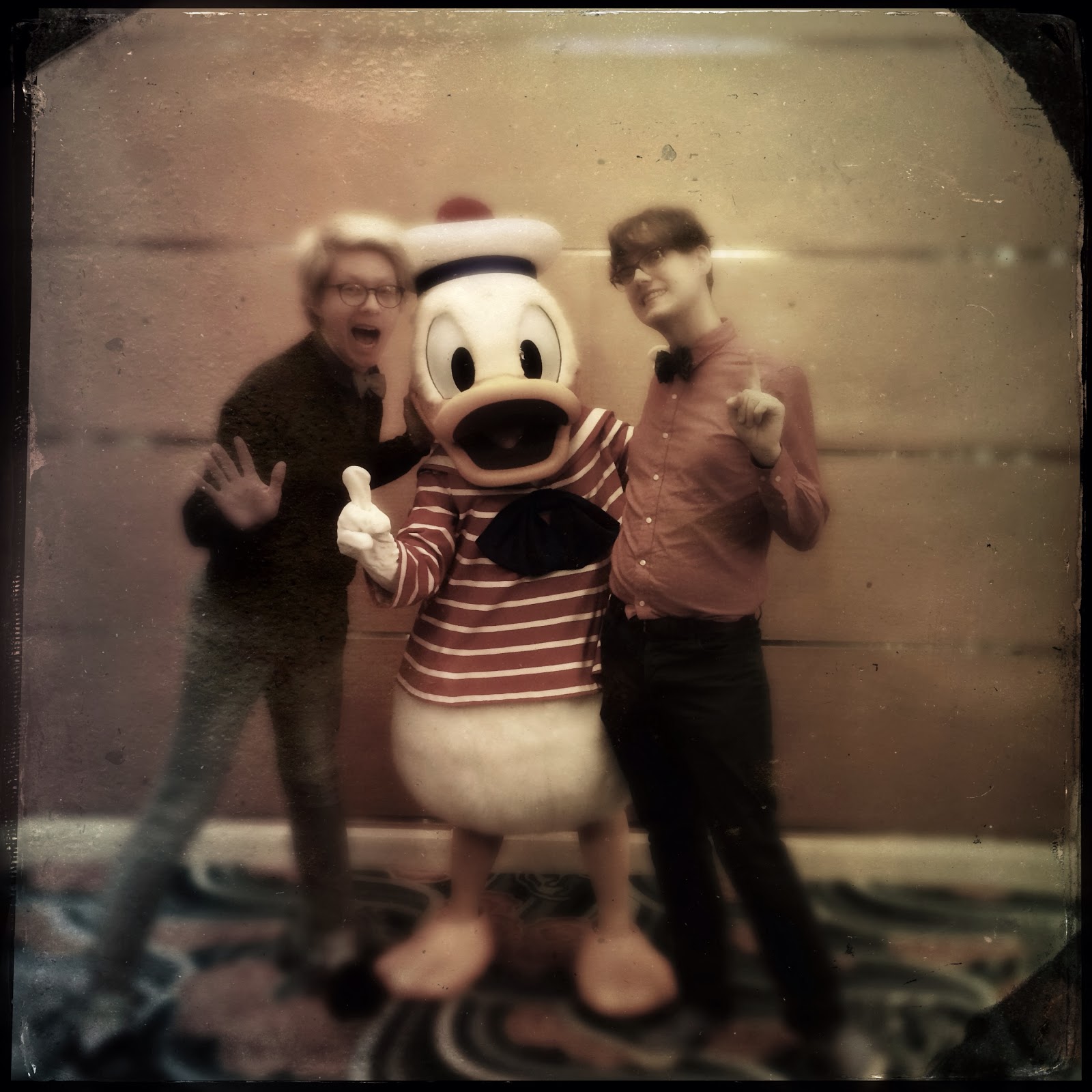 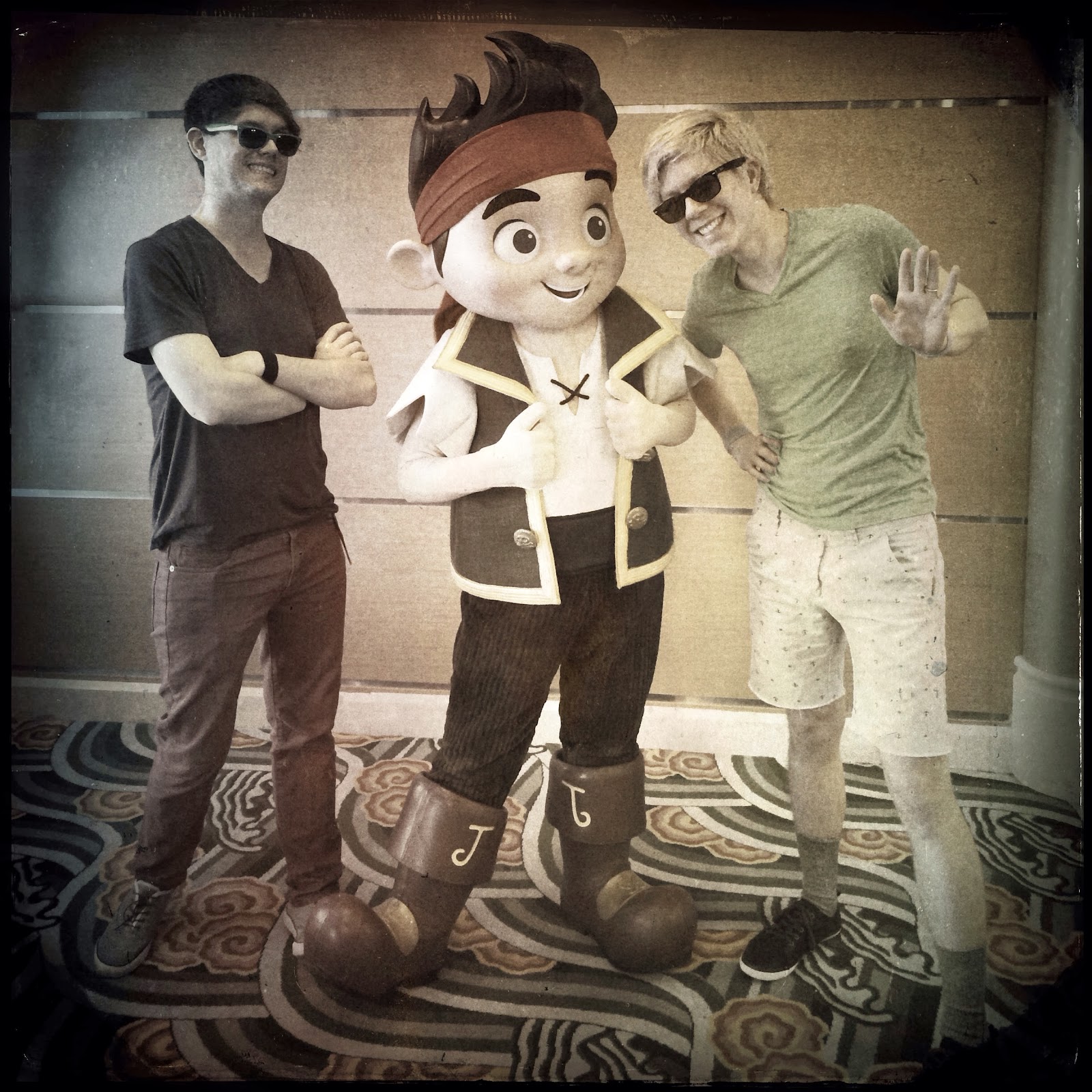 There are also sporadic appearances on deck nine (eleven on the Fantasy and Dream...) as well.  Though they too are listed on your navigator, there doesn't seem to be much rhyme or reason.
Always double check the location listed!  We almost missed Daisy (in here AMAZING cruise attire…) because I thought she would be on deck four.  Meanwhile, a queue had already formed on deck nine.  Anyway, we did meet her, thank god. 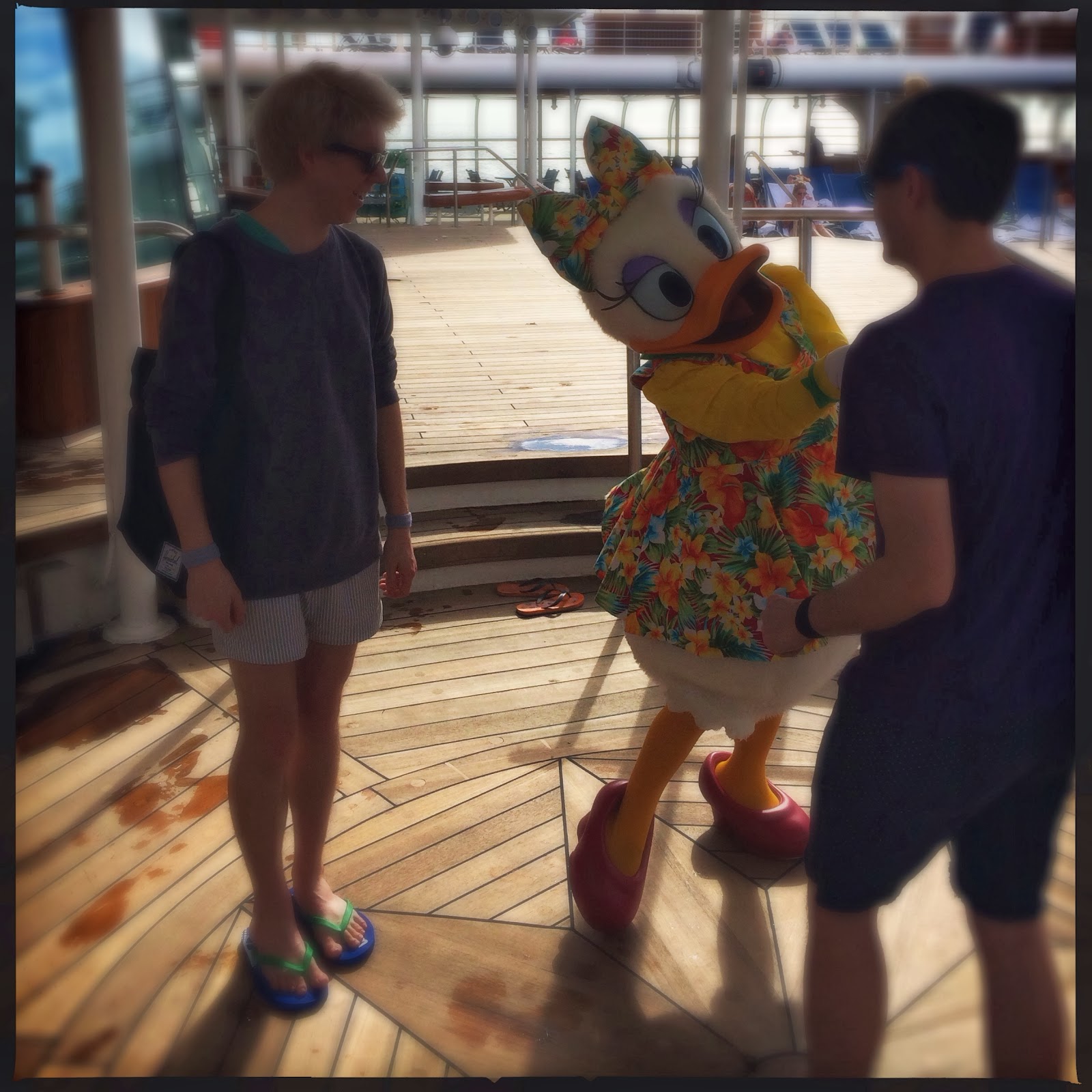 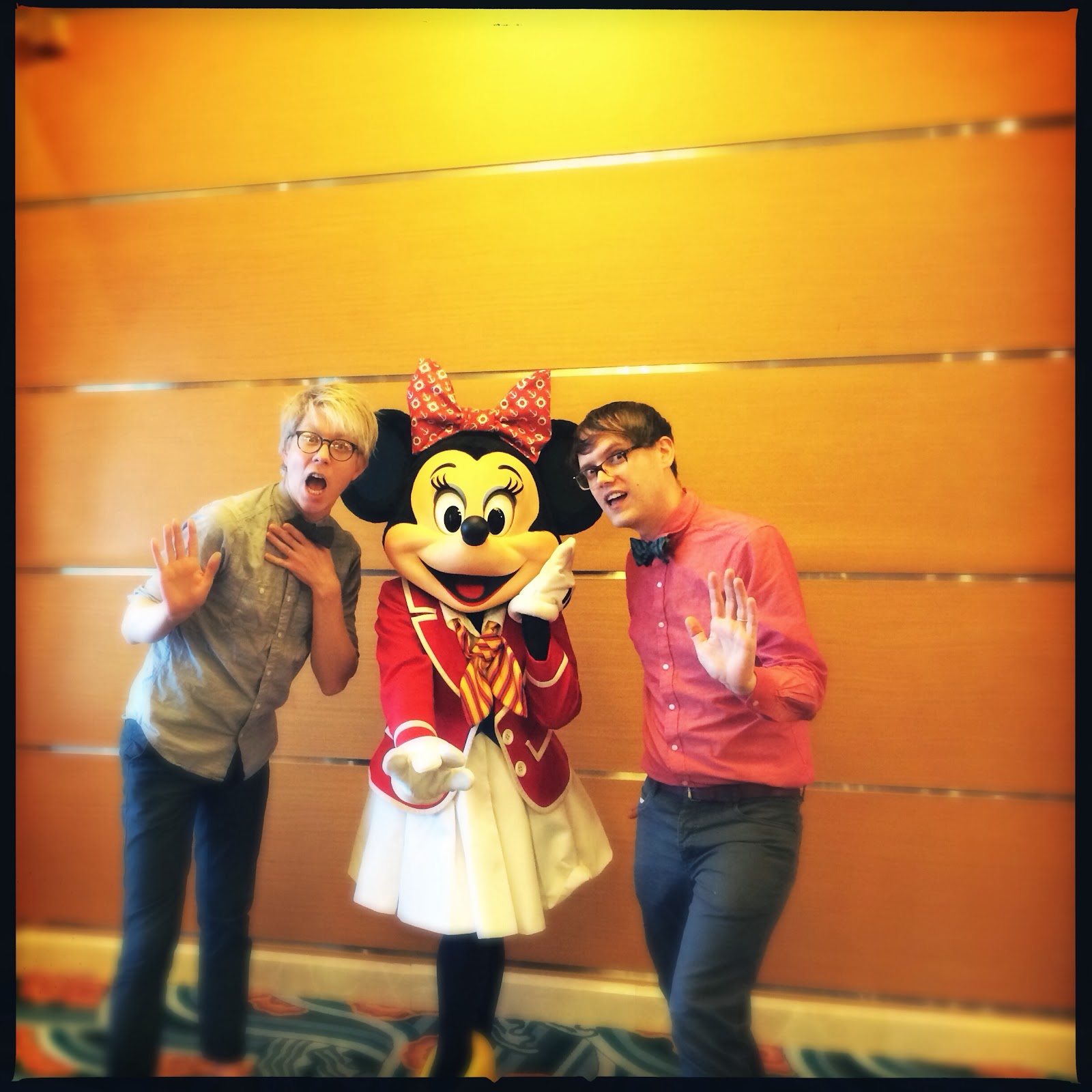 On the final night of your cruise will be the farewell show in the lobby atrium. The Till We Meet Again ceremony is a raucous and chaotic meet and greet, featuring many recurring characters.  However, you also have the chance to meet characters featuring in the various stage shows presented on board.
Even though the queues were haphazard, the crowd was in great spirits, and this meet and greet opportunity was tons of fun!  At the end of the session there is a brief and horribly sad send off to the characters.  Make sure you have a tissue handy… Given the amount of research that we did before embarking on our cruise I was surprised at how little information was available about characters.  Though it is challenging to meet everyone that your interesting in, it can certainly be accomplished.  Make sure you pay attention to your Personal Navigator, and that you come up with a plan each day.  Happy cruising!

Have you ever met characters on a Disney Cruise?  If not, does it appeal to you?  Let us know over on Twitter!  Not a "Twitter person"?  We also have a Facebook page, Google +, and Instagram.