Dinner at Carioca's On The Disney Magic

Fresh off of our first ever Disney cruise aboard The Magic, I wanted to jump right into the meal that was most perplexing.  So bare with me if this comes off a little, ug…not sweet.
Carioca's is one of three main dining rooms included in The Magic's regular dining rotation.  For those of you who have never sailed on a Disney Cruise before, the dining rotation involves you and your group being assigned to a different restaurant each night.  Along with you, your table mates, and server move along with you.  This is both an innovative and fun way to tackle the intrinsic dining problem that most cruise lines face. (aka: how to feed thousands of people like they're cattle…) 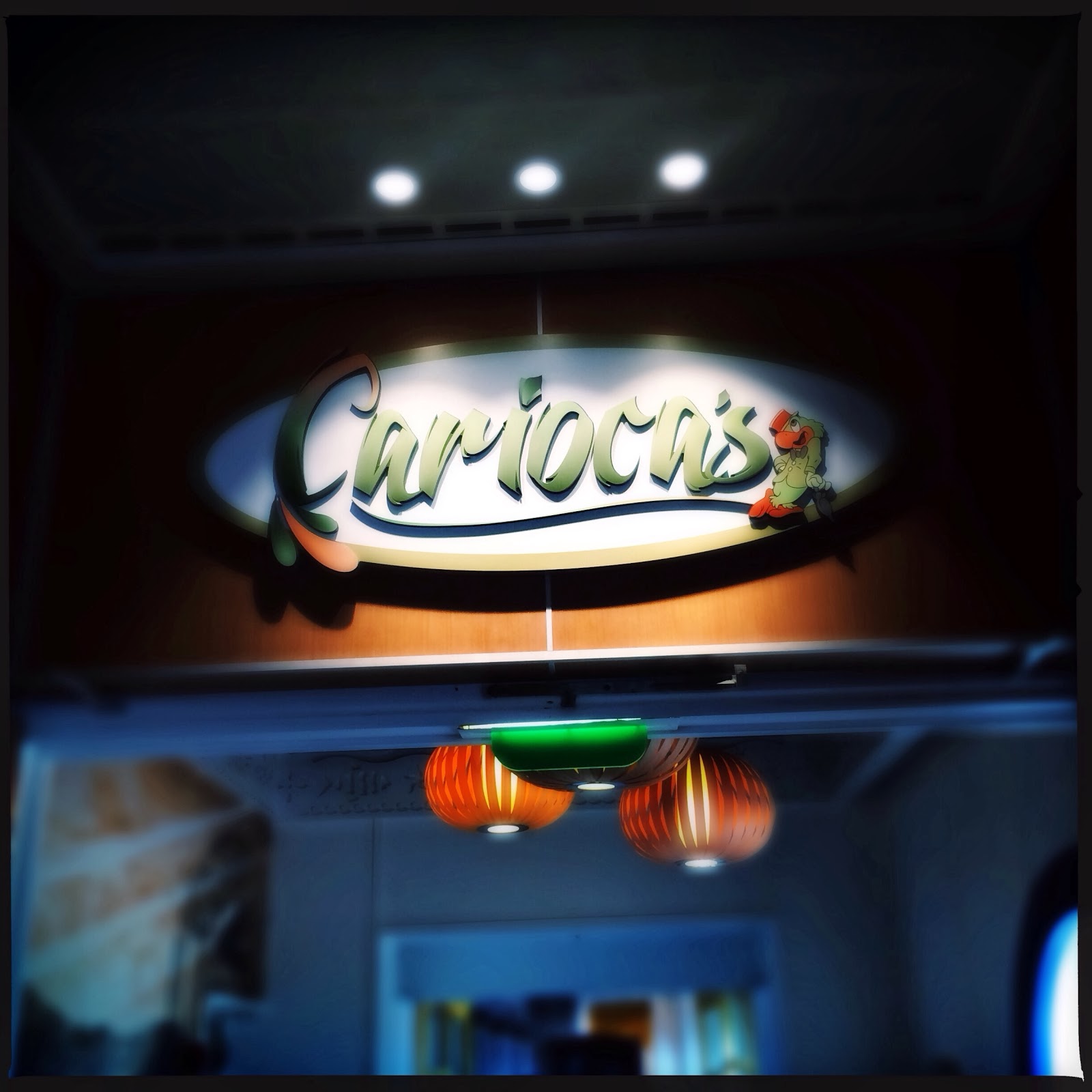 Of the three main dining rooms on board Carioca's went through the biggest overhaul during The Magic's long "re-imagineering" last year.  Not only was the theming and food different, but it also went from being called Parrot Cay.
Having a restaurant named after one of my favorite Disney characters (Jose Carioca of Three Caballeros fame) was enough to get me excited.  And the retheming of the interior is actually really gorgeous... 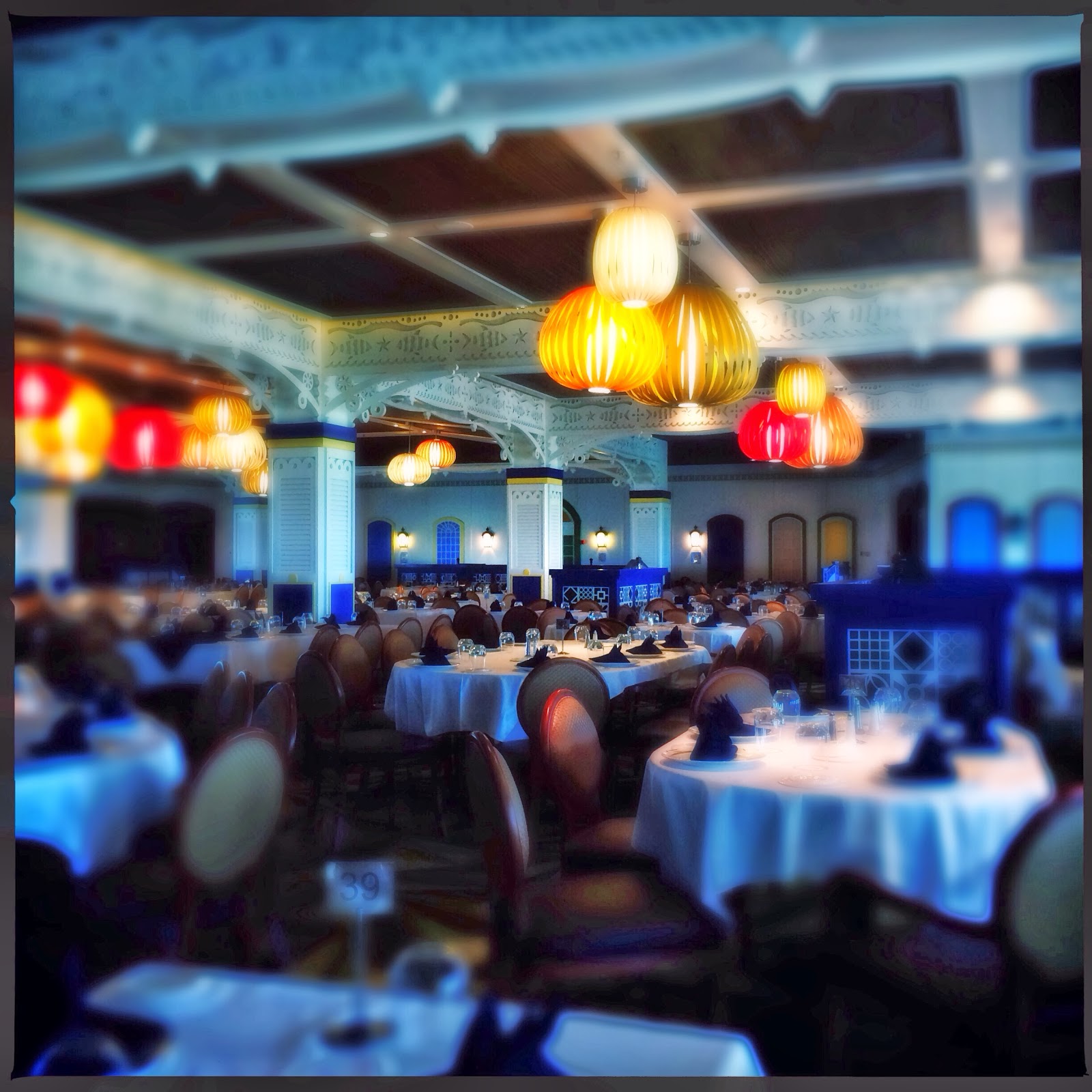 Updated from the pastel overloaded Carribean nightmare Parrot Cay, Carioca's truly works with the art of understatement.  The majority of the dining room is white, with charming whimsical woodworking along the "rafters." (I quote rafters because they play no actual function…) Accented with a vibrant blue along the walls, and fantastic lanterns throughout, Carioca's is a very pleasant place to eat a meal. 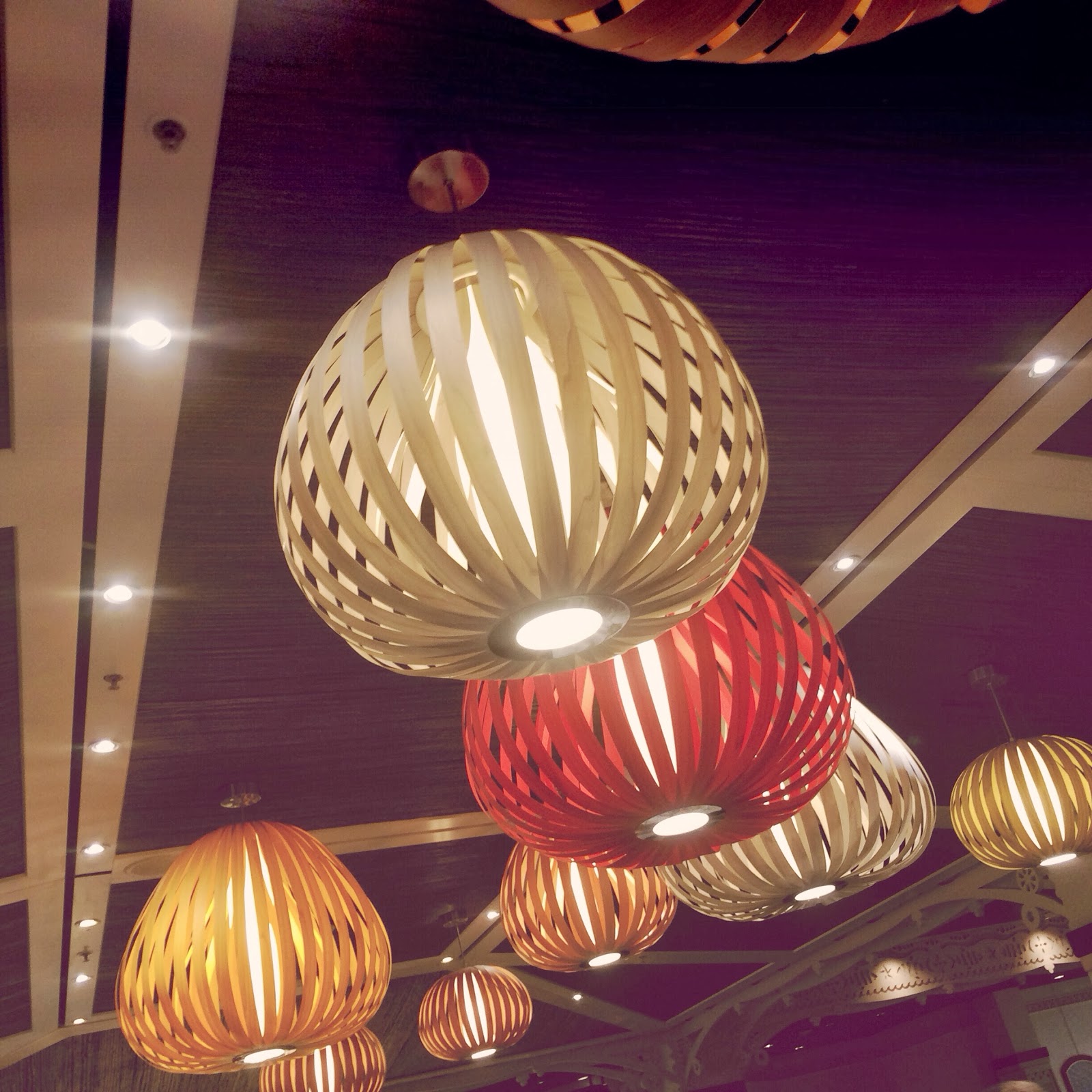 In addition to the very pretty overhaul of the space,  the new menu was also getting relatively great reviews.  After perusing the menu a few (dozen) times before embarkation, I was actually excited for this meal.
Uh oh…whats that?  It was pretty horrible you say?  Because of the nature of eating on a cruise ship, by which I mean OVER EATING…I'm going to keep my descriptions as short as possible.  I really do hate to dwell on the negative, BUT someone has to say something about the lame vegetarian offerings at this place. 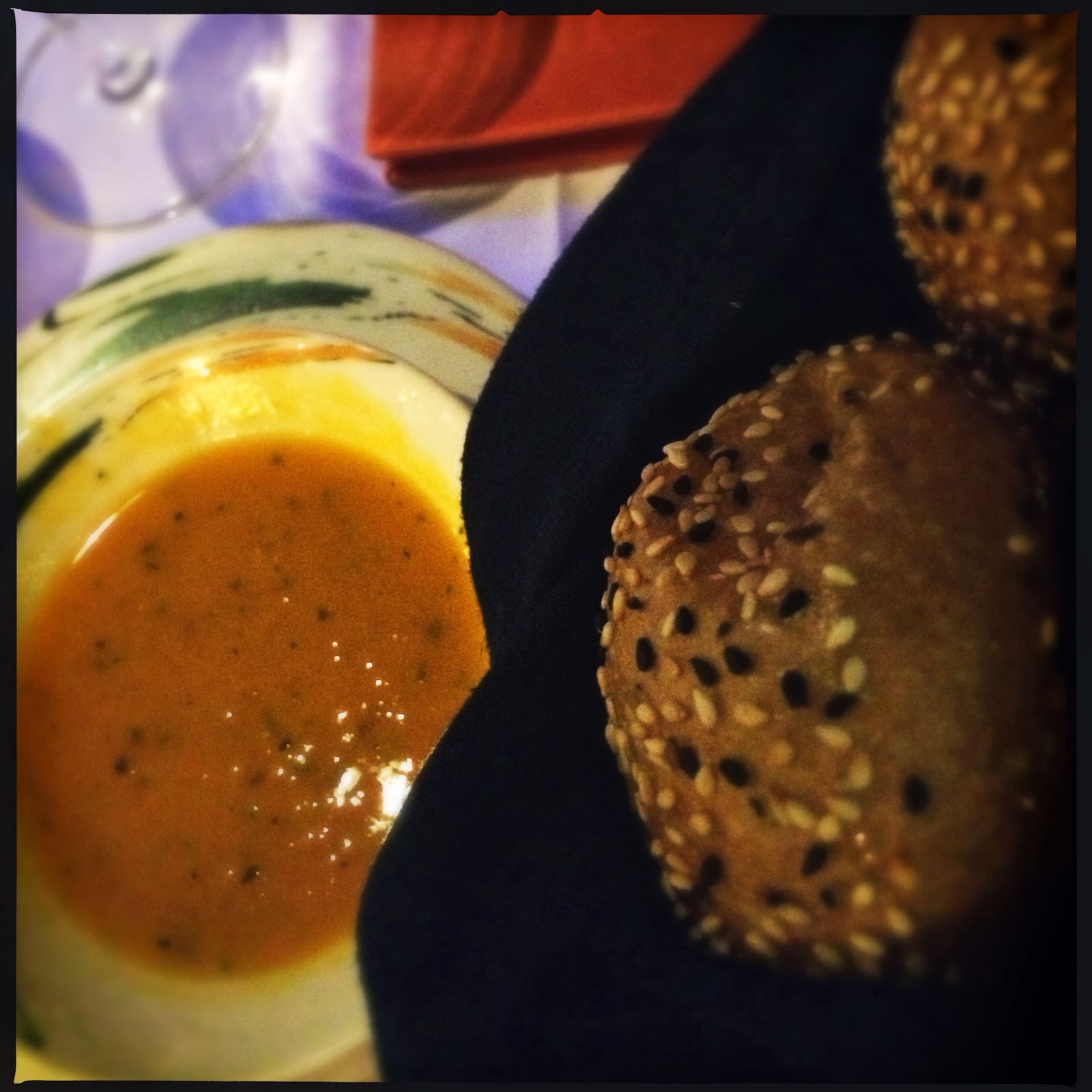 As some of you know, sit down dining on Disney cruises always start with bread and accompaniment.  In this case there was both a seeded whole wheat bread, and oddly enough, banana bread.  These came with a mango-mint mojo.  The wheat bread tastes similar to what you would find in a elementary school cafeteria, and though the inclusion of banana bread is perplexing it was pretty tasty.  The mango-mint mojo?  Gross.  I love mango, I love mint, I also love lime…but friends, this just didn't work with bread.  It was like dunking wheat bread in a mango margarita. (seriously…that is EXACTLY what it tasted like. ) 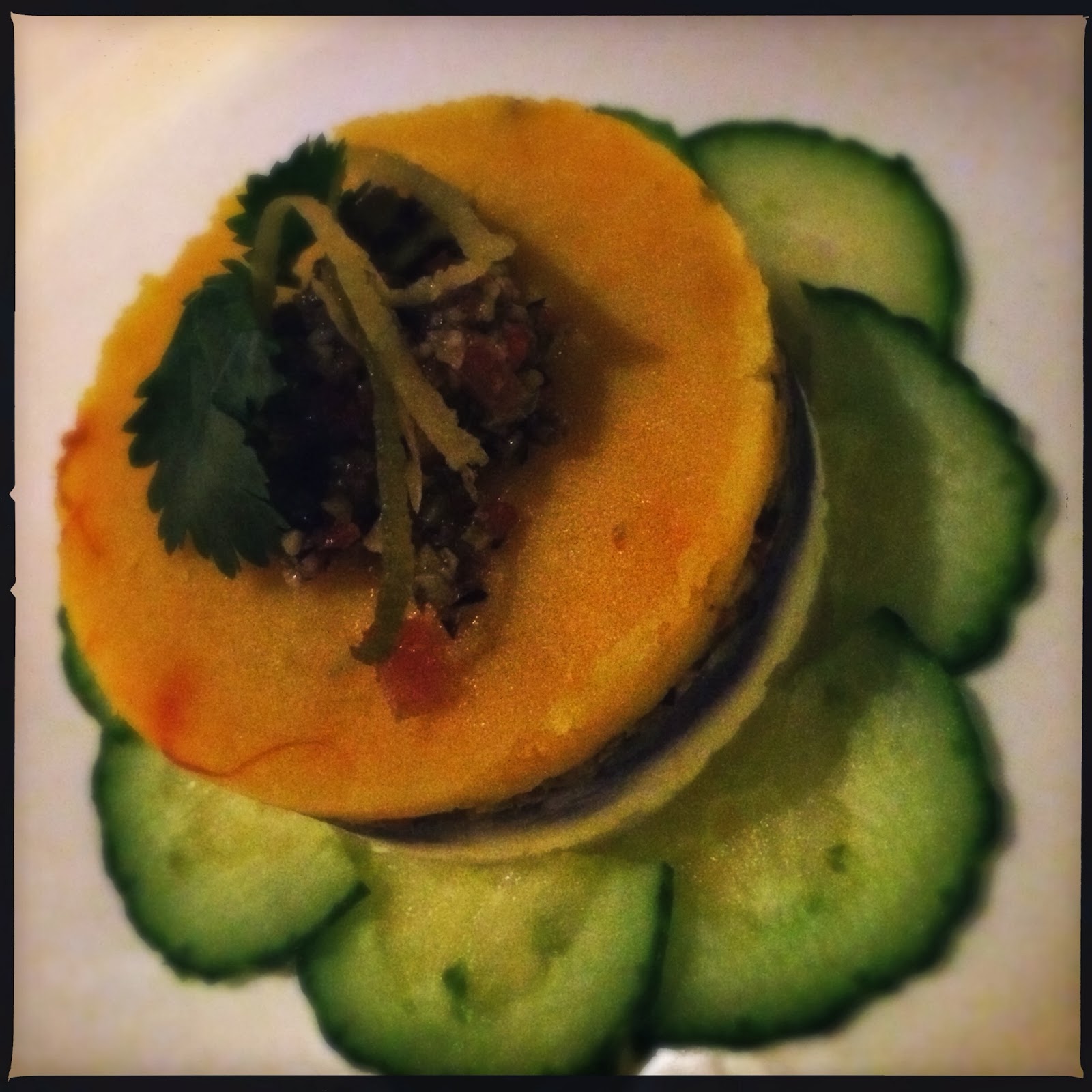 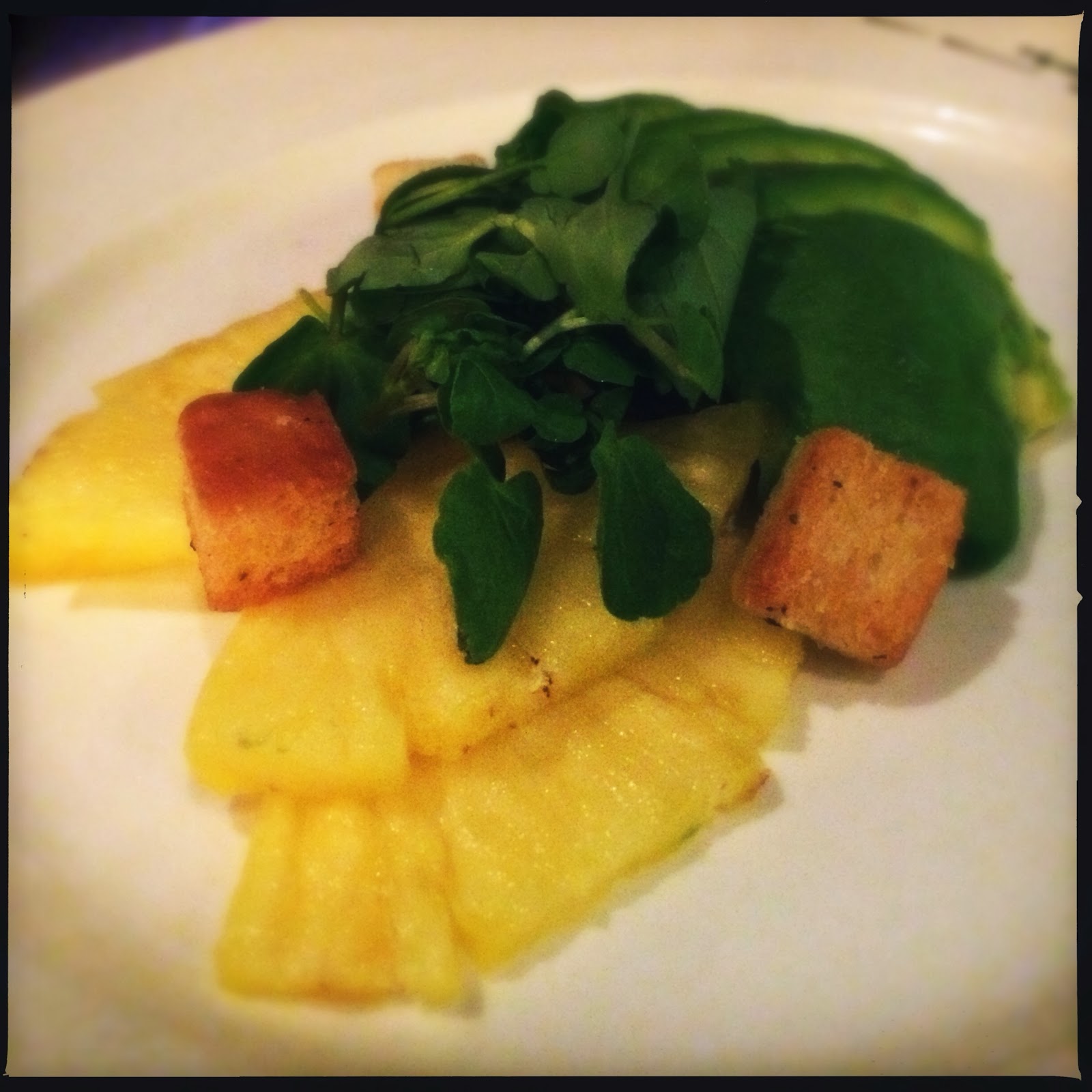 Our first real course was an appetizer and salad.  The Peruvian Causa  which is described as yellow, blue, and white potato with cucumber and olive-tomato salsa and huancaina sauce.  While very pretty to look at, this dish was so unbelievably bland!  The overwhelming flavors were potato and cucumber. Meh.  The olive-tomato salsa had no flavor either, but did add textural contrast and I wished there was more of it.
The Cuban salad is going down in the history books as one of the oddest things I've ever been served by Disney.  Imagine a quarter of a sliced unripe avocado, a few slices of pineapple, a handful of watercress, and two croutons.  This doesn't make for the best salad…even though I LOVE all the components, it should have been dressed, or at the very least SALTED.  It was truly a bizarre choice.
I should also mention that we also had the black bean soup which was actually pretty good as black bean soup goes…but have you ever tried taking pictures of a bowl of beans?  Not sexy. (see below…) 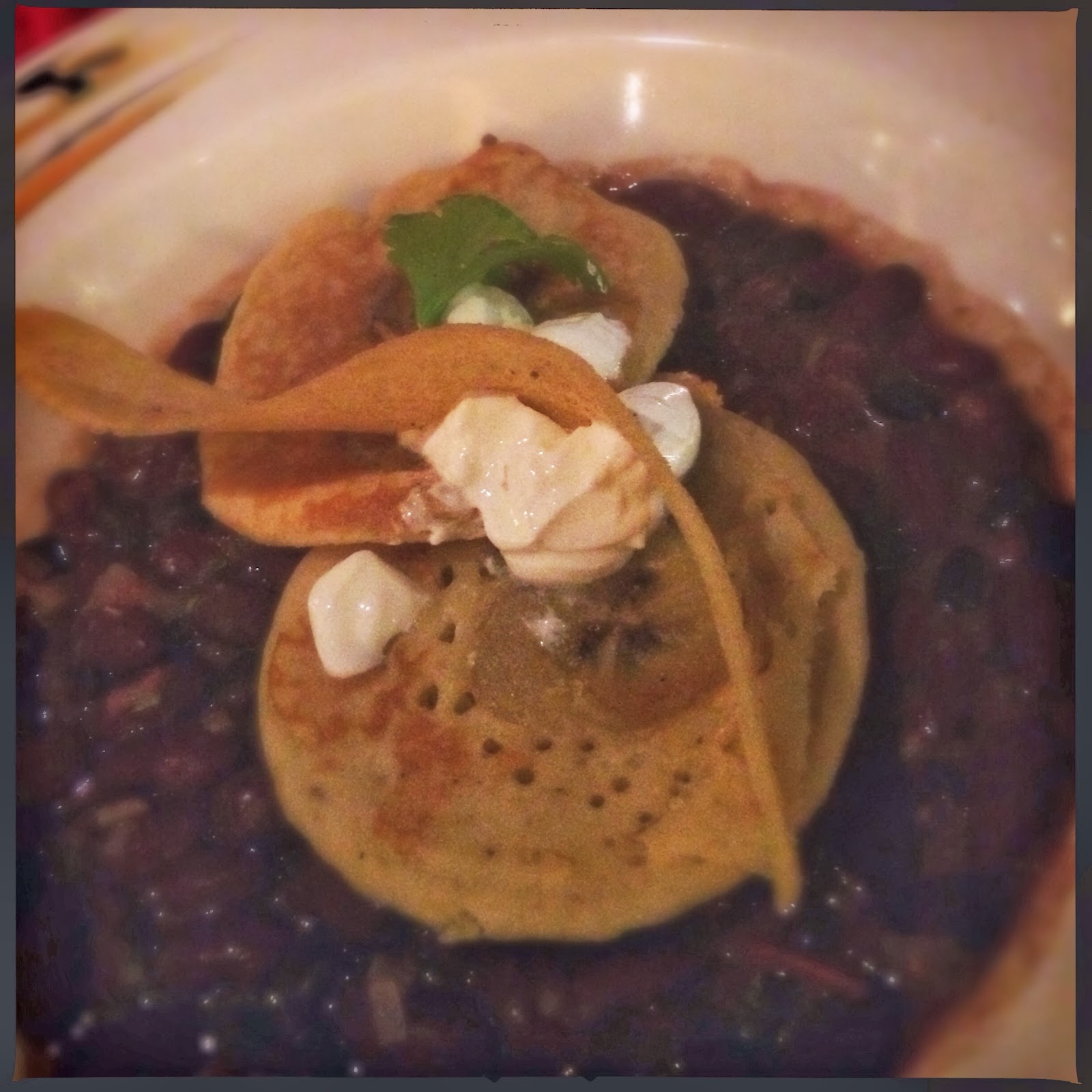 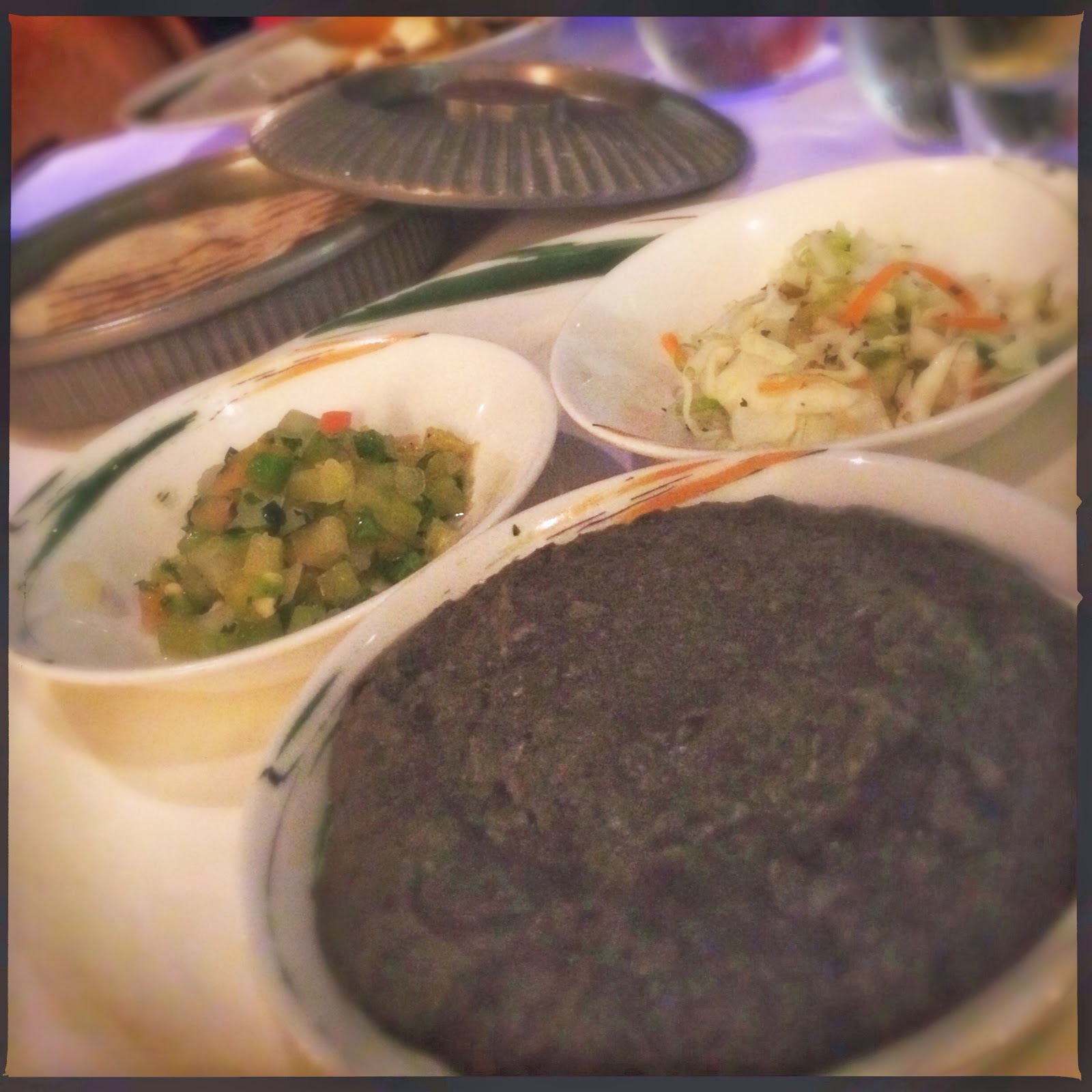 Our entrees were the Fried  Plantain Malanga Pancakes with creme fraiche and the Small Corn Tortillas.  The pancakes were a nice step up from the previous two items. Good, but not great by any means.  The sweet plantains and the savory (almost salty…) kidney beans were a good combinations and the creme fraiche brought it all together.  The biggest problem I had was the HUGE AMOUNT of beans on the plate.  It made our meal look ugly compared to the other diners at our table.  PLUS, the description of the dish didn't even mention beans.  Bizarre.
The small corn tortillas entree is a "build your own taco" situation.  In addition to the tortillas, you're provided with even more beans! Lucky us. As well as green tomato salsa and what was essentially cole slaw.  The flavors here were totally acceptable and forgettable.  In retrospect there should have been a sauce to go along with these tacos…as they were a little dry. 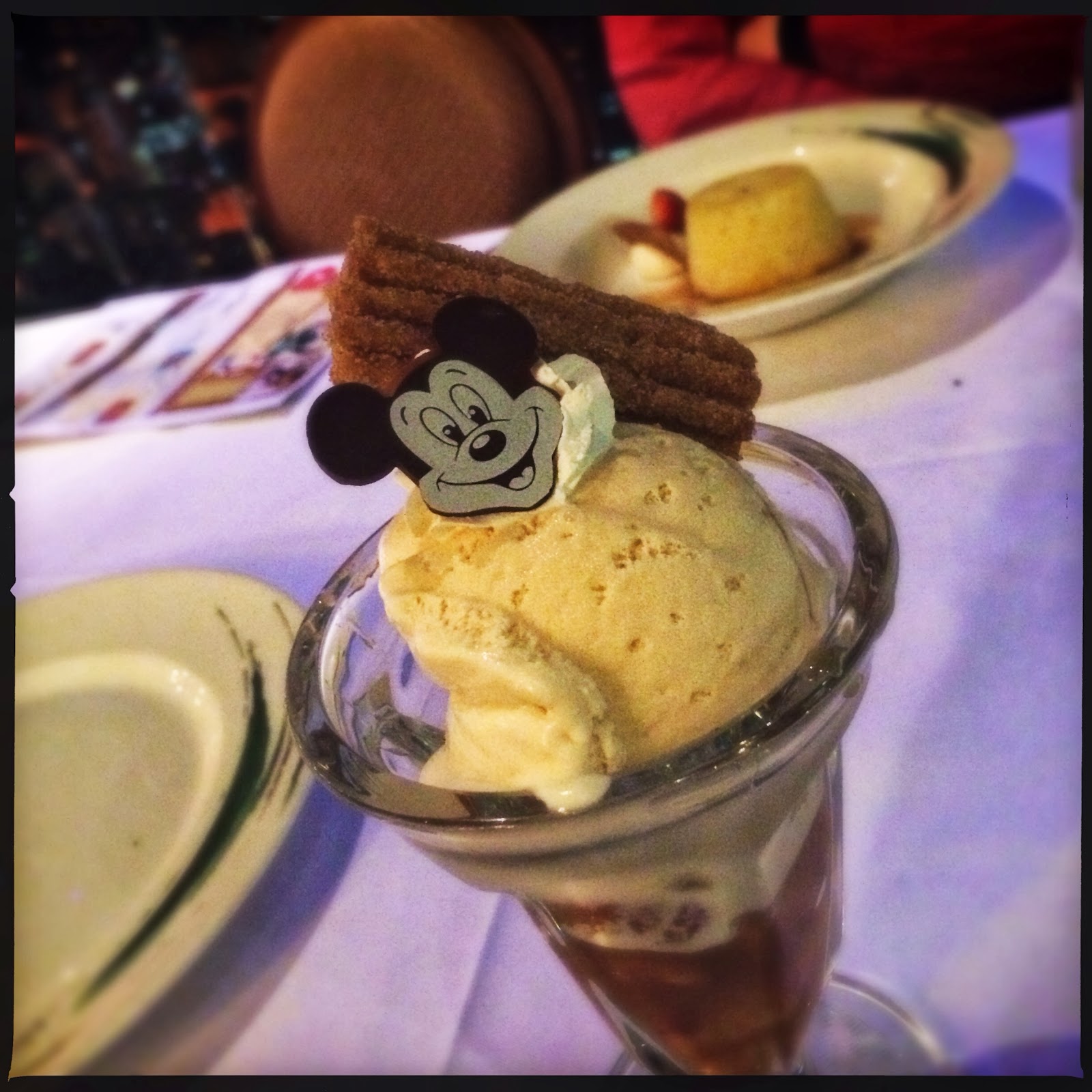 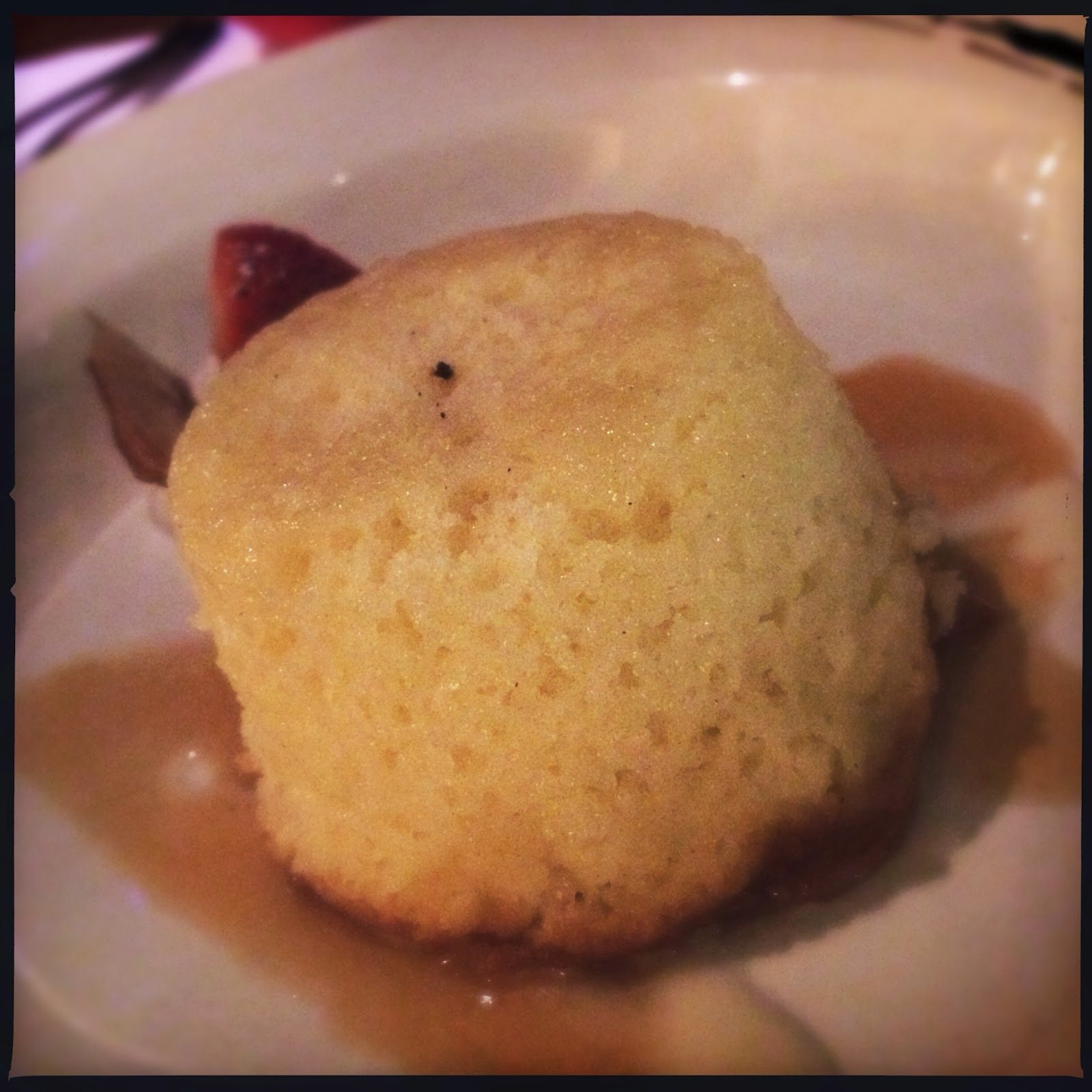 After all that…we ordered dessert. Very uncharacteristic.  I've known since the early stages our out trip planing that I WANTED THE CARIOCA SUNDAE!  Which is a delicious combo of dulce de leche ice cream, caramelized apples, and churro!  Yes my friends, this was a delightful little dessert.  I am partial to apple-y sweets, and the churro had the added whimsy that I require in my day to day life.  Delish.
The coconut tres leches cake? Not so much.  It wasn't bad, but it was very forgettable, like most of our meal.

So, that is the peak of our negativity aboard the Disney Magic.  Its all uphill from here.  And truth be told, it wasn't so much that we didn't enjoy our food…it was all edible.  But I was expecting bright bold flavors, considering the Brazilian jumping off point.  What I got was forgettable and drab.   When we inevitably cruise again on the Magic we will skip Carioca's during our dining rotation.
Posted by Adam and Andrew at Wednesday, February 12, 2014