Six Things I Hate About Tomorrowland

Tomorrowland hatred is a fairly obvious assumption.  Whether in the Magic Kingdom or at Disneyland…this place is a disaster area.  The funny thing about my own personal distaste for Walt Disney World's version is that it is purely aesthetic.
As far as attractions go, I'm not all that turned off.  Carousel Of Progress is one of my favorites and I love Space Mountain.  (In fact, the Space Mountain exterior would be an appropriate jumping off point for a Tomorrowland refurbishment. ) Whether or not I enjoy the other attractions is neither here nor there…the fact is, the facades are all pretty horrible.
The thing about Tomorrowland is that it should be simple. sleek. and white.  The current iteration is bogged down by clutter, and not cool clutter.  Just random junk with no real purpose other than to fill space in an area that should be vastly empty.  If a full blown refurbishment isn't in the cards for Tomorrowland, a few minor changes could be made to up the aesthetic value of the land.
Here are some examples of things that should either be taken out or changed. 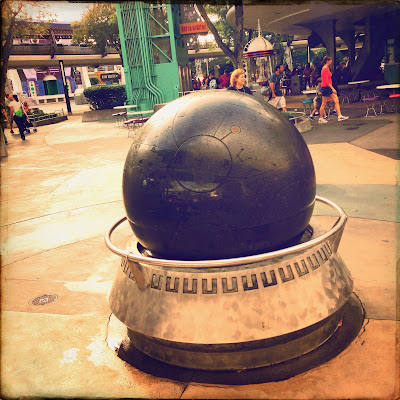 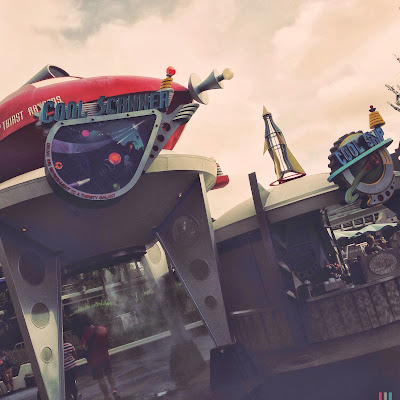 You guys knew the floating marble would be on my list, right?  Yes, it is very cool…and not even that bad from a design aspect…but why is it here?  Are we so desperate for stuff to do at The Magic Kingdom that we need to through diversions into the middle of a busy walkway?
The Cool Ship and Cool Scanner are both totally unnecessary.  The Cool Ship is enormous and only serves soda (and chips?)  Since there are much smaller food carts near by, this could be removed without disturbing peoples eating habits.  The signs are gaudy and very Tomorrowland 1994. 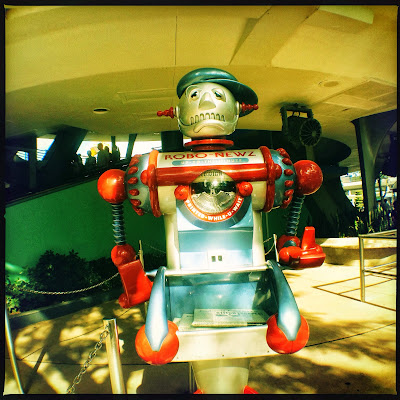 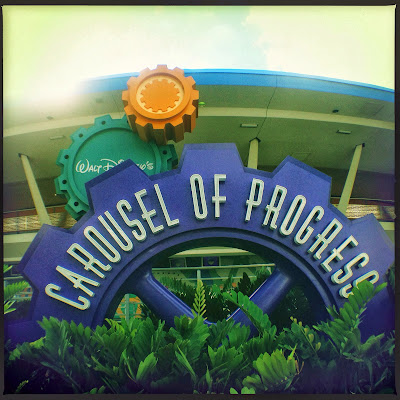 The "news robot" is another great example.  It is a diversion, set up to keep kids entertained…and yet, its a disaster to look at. Plus, its placed in an already congested area between two different attraction queues.
Carousel of Progress is a timeless attraction…with the worlds most dated and hideous sign ever.  This monstrosity comes off as desperate, and even though its in a planter it still takes up way too much space.  The replacement should be simple and understated. 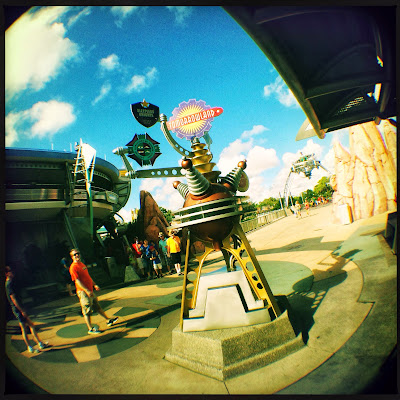 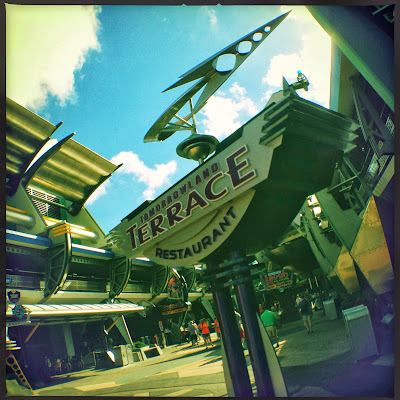 These last two are anomalies.  Each is a sign to nowhere.  Announcing to the audience either "look at where you are" or "look at whats closed."   Despite the fairly obvious need for removal, they remain strong…the only purpose of which is to get in guests way.
Tomorrowland is definitely long over due for a lengthy refurbishment, but given the current theme park climate I doubt we will get one any time soon.  A basic "spring cleaning" of the area, including purging the above clutter, would make such a world of difference.  Thus we can prolong the immediate need for a costly re-theme.

What do YOU think?  Do you like Tomorrowland the way it is?  If you could change ONE THING what would it be?  Share with us over on Twitter or on our Facebook page!
Posted by Adam and Andrew at Monday, January 20, 2014