Two Stunning Concepts From "Our Friend The Atom"

Walt Disney's interest in the space age and atomic energy in the 1950's and 60's was palpable.  The culmination of which was a series of episodes of Disneyland and of course early Tomorrowland at the park itself.
I'm not sure whether its the specific nature of these episodes of Disneyland but I had never seen the 1957 episode "Our Friend The Atom."  I'm sure the opportunity to view was there, but to a kid even the title sounds a little boring.  Little did I know how entertaining the one hour special is.  Full of fascinating science (brought to you by Disney's new "science department") but also fun animated clips as well.
From the Design book from The Archive Series here are two wonderfully stark concepts for the genie featured throughout the show. 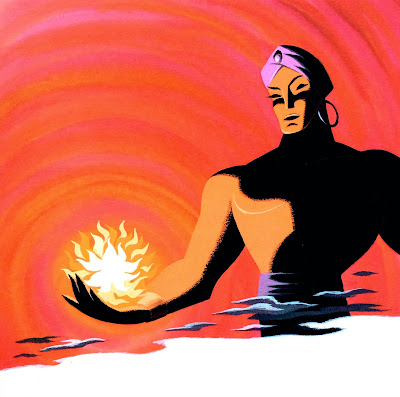 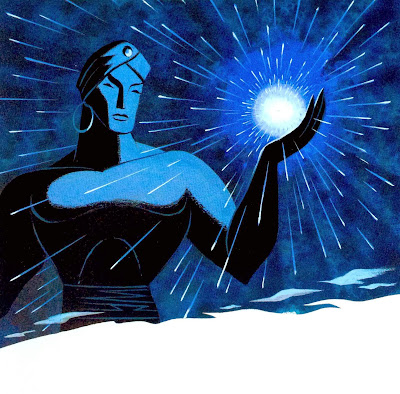 The use of a genie to represent the proper use of atomic energy is a huge stretch…and not one that works entirely too well.  The story comes across as a little pushy and panders to the audience…and it sure is weird.  And for that, if anything, it serves a purpose as a bizarre side note to all the fabulous short cartoons Disney had produced.
The genies design changes pretty drastically before he appears on screen, looking more like the genie form of Jafar toward the end.  I love the bold illustrative look of these concept pieces and think they come off more as high art, as these things so often do.  As far as I can tell the artist is unknown.  I realize they aren't Eyvind Earle (he was working at Disney at the time…but isn't known as much for his figurative work.) but the colors and shapes are pretty reminiscent.  Maybe a portage of Earle's?

UPDATE:
Here is a screen shot from youtube of how the genie turned out in his final form.  On second thought, he looks pretty fabulous…in a Masters Of The Universe kind of way. 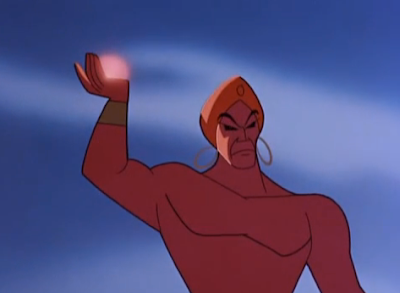 Posted by Adam and Andrew at Wednesday, November 20, 2013