Fans of our Layout And Background series (which you can see here, here, and here...) will be happy to know that Adam recently bought me the Design book from the same Walt Disney Animation Studios Archive Series!  This book differs strongly from Layout And Background...which focuses on the fairly obvious title.  The Design book n features both character development, but also the evolution of the "look" of the movie.  I am seriously psyched to have this in my possession.
The first installation is both random and fabulous.  I literally opened the book up toward the middle, on a whim, and went with it.  Here are two gorgeous character design sheets for the three good fairies from 1959's animated classic Sleeping Beauty.  The fabulous thing about this book is opportunity to analyze the design process of the artists, and then compare to what we actually get on screen. 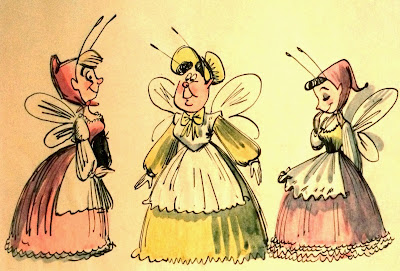 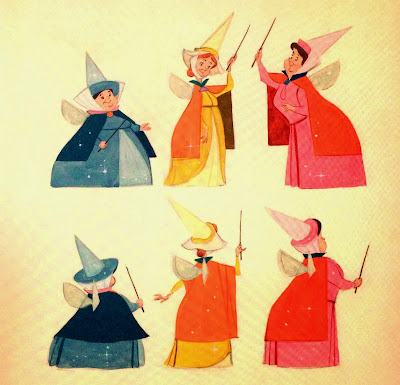 The first image was made very early in the development of the film, while these characters were considered much more ancillary.  Though many would still consider them the comic relief of the film, the ended up much more refined.
The second image shows the stunning Marc Davis design, with its signature angularity and bold mono tonality.  His design was dumbed down for the film in the end, making the characters a little easier for his team.  But imagine how wonderful these would have looked against the original Eyvind Earle backgrounds?!?!?! This film could have been stylized as hell! :/

I hope you guys enjoyed these as much as I did.  The three fairies are some of my absolute favorite, and deserve their rightful place in design history.  Which fairy is your favorite?  Or do you hate them altogether?  Let us know over on Twitter!