One of the simple pleasures of being a Disney fan is jumping into random subjects that have all but the smallest ties to Walt Disney World.  Though it has never been one of our favorite World Showcase pavilions we have spent a bit of time learning to appreciate the China pavilion recently. In January we explored the history of the featured architecture, and even featured this spot in a recent Sunday Quickie!  So at the very least we're trying our hardest...
Furthering our survey of this grand pavilion, were actually going inside the Temple of Heaven, to examine the (seemingly forever) ongoing Tomb Warriors exhibit! 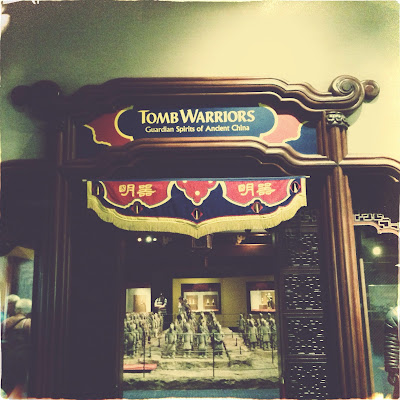 The exhibit is located just to the left of the waiting area for Reflections of China, and features a gorgeous entryway that builds up the anticipation!  Flanking each side of the entrance are life-size ominous warriors, a precursor to the artifacts located within. 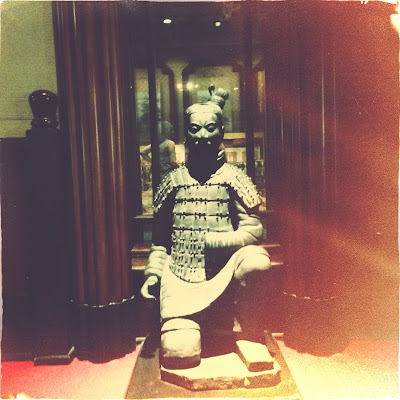 Once inside, you'll be happy to find a quite and serene atmosphere...not exactly what you would expect to find in one of the world's busiest theme parks.  A familiar (to me) and relaxing background music loop sets the mood as patrons mill about.  The walls are flanked with dozens of whimsical and visually striking Chinese artifacts.  But the main show is located directly in the middle of the room. 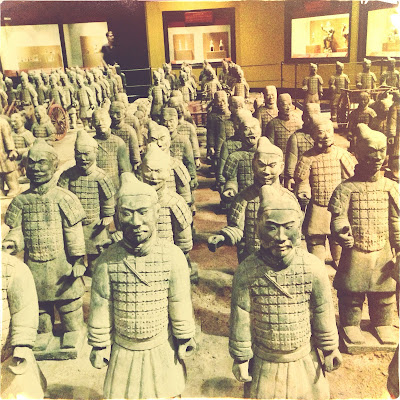 The very first act of Qin Shi Huang (before he was emperor) was to make preparations
for the afterlife by beginning the construction of his tomb.

Over a period of 36 years, 700,000 laborers constructed a vast underground city that
included a massive palace and a life-size terra cotta army.  This army was comprised of over 7,000
cavalry troops, chariots, and horses.  The tomb has been dubbed "Necropolis" or
"metropolis of the dead." 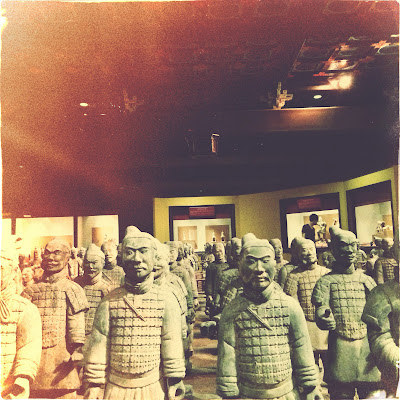 These tomb warriors were intended to be the protectors of the emperor beyond the grave.
Because nearly all of the faces of the tomb warriors are unique, some archeologists
believe that the figures were molded after real soldiers.

Many other emperors followed Emperor Qin's example and created their own spectral
armies. One tomb even provided a mess hall for the convenience of the terra cotta statues. 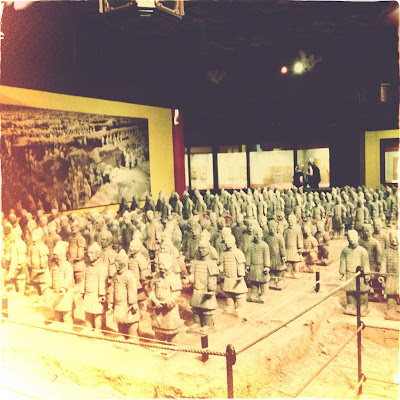 Pretty cool right!?  Though these recreated warriors are not life size, they're all together quite impressive!  Next time you're strolling around World Showcase take a moment to enjoy the provided lesson in history, at the very least it does have air conditioning and a wonderful background music loop.
If you want to read more about the history of the Qin Dynasty terra cotta army, here is the Wikipedia entry which is surprisingly detailed an awesome to read about.  Next week we will take a look at some of the other artifacts located in this terrific mini museum.

What is your favorite distraction at Epcot?  Let us know over on Twitter!