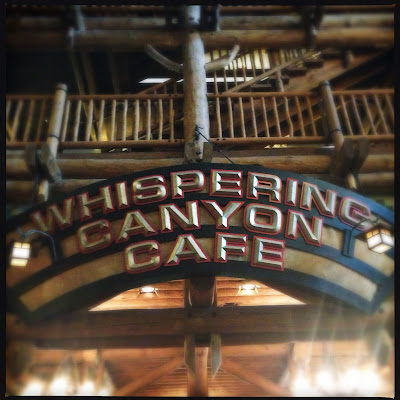 Tucked away in the woods near the Magic Kingdom is Wilderness Lodge. An resort so epic in stature that it rivals my beloved Animal Kingdom Lodge in theming and grandiosity.  In fact, both resorts share the same architect in the late Peter Dominick.
A wonderful foil to the enormous lobby is Whispering Canyon Cafe, a low key table service restaurant located just beyond the entrance to the resort.  Whispering Canyon promotes its food as "hearty western fare." But I think a more apt description would be new American cuisine with an old west spin.  The restaurant itself is pretty informal, especially when compared to the resorts other sit down restaurant, Artists Point. In fact, children are encouraged to dine here...and will have a blast considering the notorious wait staff interactions. 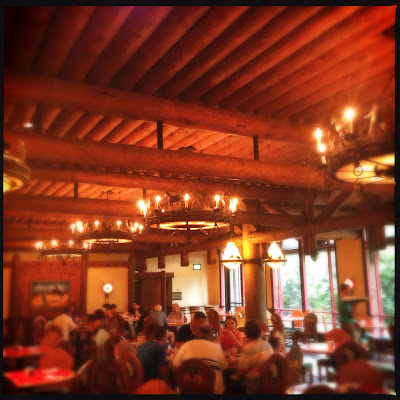 This past May we were super excited to eat here, considering we had made (and broken...) reservations several trips in a row.  This random afternoon we found ourselves with nothing substantial to do, and quite hungry...and quickly settled on Whispering Canyon. Though we didn't have a reservation we were seated in short order.
We had spent the morning traipsing around Epcot and were getting quite hungry.  We eagerly ordered  the flash fried navajo bread, which is served with citrus honey and tomato jam.  The "bread" in this appetizer has the consistency of a wonton wrapper, and somehow managed to be chewy and crispy at the same time...in a good way! The salty bread is completely drenched in honey, which adds a phenomenal depth to the dish. The tomato jam is essentially boiled down tomato paste, and uneventful in any case.   Maybe my stomach isn't as big as most people, but this is an enormous portion and filled both Adam and myself up pretty quickly. 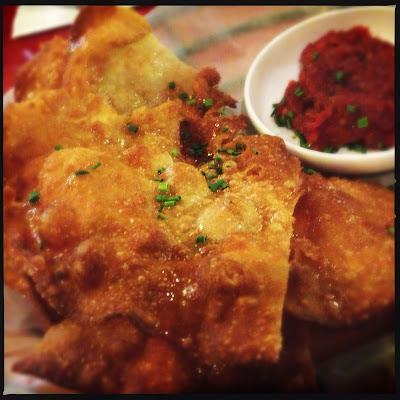 I'm starting to come to terms with the fact that most (seriously...almost all of them.) restaurants at Walt Disney World will only offer one vegetarian option.  It's not much, but at least its something.  In the case of Whispering Canyon the one option ISNT EVEN LISTED on the menu!  Clearly not having a choice in food isn't enough, us vegetarians also have to bug our server by asking what is available...
The long term veggie option at Whispering Canyon is a Sautéed Quinoa Cake with Edamame Salsa. Turns out in this situation that the chef used red quinoa, which is the exact same as the more common beige variety.  The quinoa is pressed into cakes and sautéed with very few other components. And while I love the plain nutty taste that quinoa has, a lot of people are put off by it.  The simple addition of garlic or a peppery element could really turn this whatever tasting dish into something terrific.  The cakes are topped with a tzatziki sauce (a vegan version can be made, fyi...) which added little more than much needed moister to the dish, and only helped marginally in the flavor department. 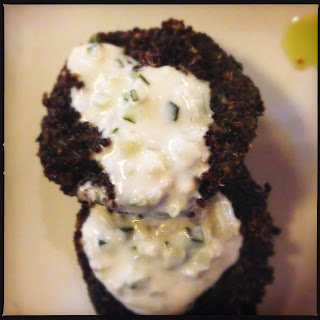 The edamame was less of a salsa, and would be better described as a succotash.  The flavors of fresh edamame, corn, and zucchini are clearly the stars here. You will find no complaints out of me when delicious simple vegetables are present.  A small simple baby lettuce salad is also on the plate as well, and the sides are dressed with a balsamic and herbed oil dressing.  Very tasty indeed. 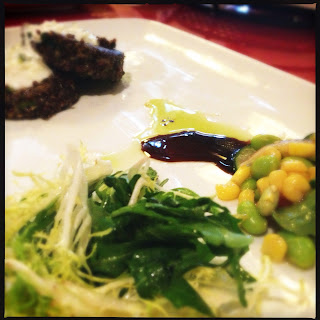 I should point out that the above photos are half portions.  Our very friendly server was kind enough to split our order without us even asking.  I'm happy that Disney has no problem doing this, especially given that there is only one option for us to try.  I would hate to feel obligated to order two of the same thing.  Plus, I would have a very hard time finishing a huge portion like that, nor would I want to.

Our first meal at Whispering Canyon was pretty blah, considering the terrific pantheon of Disney restaurants.  Maybe it was the lethargy of a lengthy trip coming to an end, or the fact that we had enjoyed so many other meals earlier in the trip. Forgettable is a pretty appropriate description, and it might be a while before we get bored enough to return.