On a recent trip to Walt Disney World, Adam and I found ourselves quite hungry.  We weren't  in a theme park, and also didn't have any dining reservations.  A quick brainstorm led to Adam's idea of checking out the newish Art of Animation Resort and its counter service restaurant Landscape of Flavors. 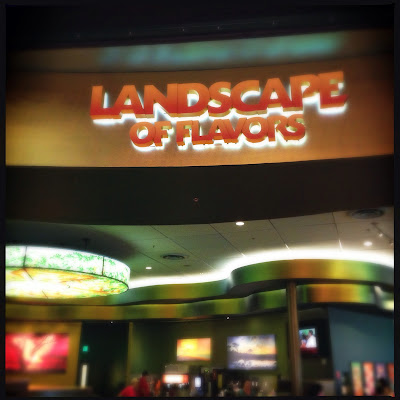 Walking into Art Of Animation we had the interesting and unusual sense that we may have accidentally arrived at close cousin Pop Century. The two resorts are strikingly similar, with AoA getting the slight edge, probably because its significantly more recent construction.
Landscape of Flavors is no exception.  Besides subtle theming Landscape of Flavors and Pop Century's counter service restaurant are almost identical.  Luckily, the food at LoF is much more varied, especially considering it being located at a value resort. 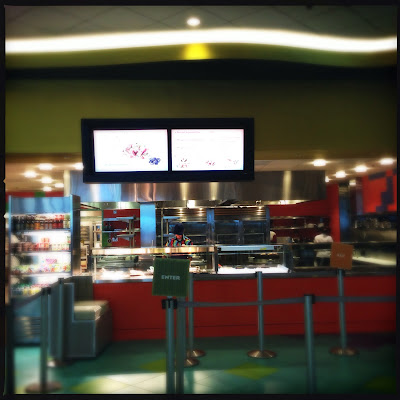 The ordering process is one that you might be familiar with.  Choose a 'bay' (that is Cosmic Ray Starlight Cafe talk...) that prepares the food that you would like to enjoy, collect your food from said 'bay' and pay at the centrally located registers.  There are several different bays, and surely everyone in your party can find something to their liking.  A big plus at this restaurant is that there are several options for vegetarians, a happy surprise for us upon arrival. 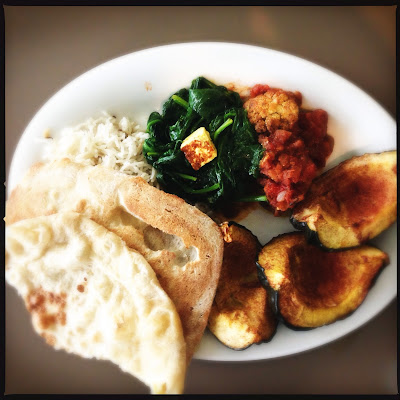 On this visit I decided to try the station consisting mostly of Disney's version of Indian food.  I should preface this by saying that we eat Indian food on a very regular basis in our day to day lives, so I went into this meal quite apprehensive.  But guess what friends...it was pretty stinking good! No, this isn't as delicious as any of our local Indian food, but it is an admirable try on Disney's behalf.
The plate comes with roasted acorn squash,  naan, rice, and "two sides."  I assumed when the sign says "two sides" that I would be picking them, but I was handed a plate and sent on my way.  The two sides here are saag paneer and roasted cauliflower.
Clearly meant to be the star of this plate, the acorn squash was indeed delicious.  It was roasted perfectly, soft with a little bite to it.  The flavors are very subtle, but consist mostly of cinnamon, which goes with acorn squash just swell! Though it was lacking a fatty element,  I'm pretty sure that this would be really tasty smothered in Earth Balance.
The saag paneer is NOT what you would get in an Indian restaurant.  The paneer was absolutely perfect, but the spinach wasn't cooked down enough.  In any normal situation the spinach would be cooked to death, sitting in a curry pot all day until broken down into goo.  I know it sounds gross, but "Indian spinach goo" is one of life's little pleasures.  Otherwise the flavors were ok, if not somewhat bland. 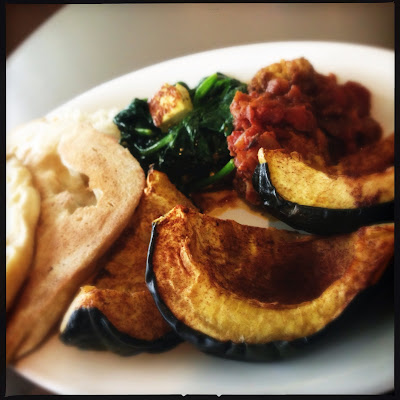 The cauliflower dish on the other hand was absolutely perfect.  I was seriously convinced that I could have ordered this at any of our favorite Indian restaurants.  The cauliflower is nice and firm, served in a tomato based curry, and adequately (by which I mean, a lot...) spiced.  I couldn't get over the fact that they had managed to get the curry proportions so perfect, especially at a value resort counter service.  If I was served this as part of the vegetarian sampler at Sanaa I wouldn't even blink an eye.
Disney's version of naan (besides that of Sanaa...) is a dry, floury, too fluffy, slab of bread.  This stuff is adequate to scoop up curry but lacks the fatty charred outside that I love.  Fortunately enough, the main components of this dish are quite substantial. I left the table completely stuffed while only taking one small bite of naan, and not a single bite of rice.
Though its not a perfect dish by any means, this is a huge step for Disney.  A good, fairly healthy, veggie based meal that isn't quinoa.  I commend the people behind Landscape Of Flavors for thinking outside of the proverbial box when it comes to their menu.  I skeptically hope that this dish thrives, and has the support that it needs to survive future menu changes...because sometimes homeboy just wants vegetables.