We are so lucky today!  Good friend of the Disney Hipster Blog (and subsequently, the Disney Hipsters...) Megan Stump (@megadis13) shared us her wonderful review of the new Starbucks on Mainstreet USA! Take it away Megan...

In January of 2013, the Main Street Bakery in Walt Disney World closed for 6 months to turn into a Starbucks Blasphemy! The World was going to clearly explode due to the product placement that would soon be taking over Main Street USA. Never mind the Edy's sign right next door at the Plaza Ice Cream Parlor. Or Coca-Cola everywhere throughout the resort. While I understood everyone's worries, I just hoped that Disney would know what they were doing. I mean, Disneyland is still standing! So when I heard the Bakery would be reopening on June 18, I decided to check it out-and hoped that my positive attitude would be rewarded. 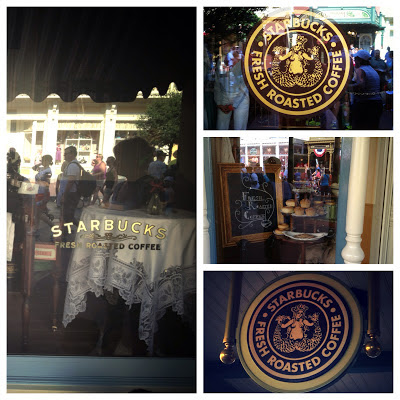 My friend Zack and I attempted to rope drop Magic Kingdom thinking Starbucks would be slammed first thing in the morning. While we missed opening (summer traffic sucks), we still got on to Main Street shortly after 9 and first checked out the new signage. Although some of the signs had been up for a few weeks, the windows were new and kept the past in check.

Inside the Bakery had changed, but I think it was for the better. There are now two lines now instead of having to wait in one long line where people can't make up their mind. Plus they have menus. With pictures! In the middle there is a rack with Starbucks coffee, Via (including an Orange Refresher that they don't serve at any Starbucks I've been to-RUDE) and other merchandise that you would find at Starbucks. Past that is a case with bottle beverages, milk, juices and of course pastries. Once you get to the pastry case, it's up to the registers. This is where the new Bakery wins. 6 cashiers, 3 on each side of the pastry case and then you wait for your items. We got through the line in about 10 minutes-they keep it moving much better than the old Bakery. All your condiments are on a sideboard. My one complaint? No knives. Everyone else's complaint? No seating. 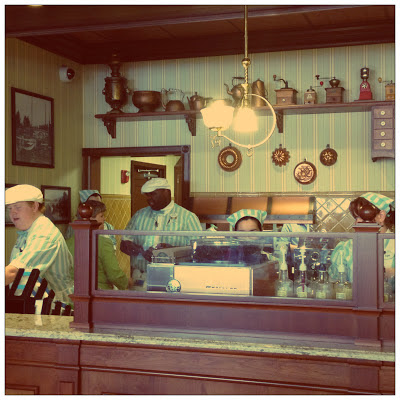 That's right. About a third of the new Bakery is where the seating area used to be. I've heard so many issues with that, but I didn't see much of a problem. There wasn't a lot seating to begin with, and there are plenty of tables and chairs close by. The way they package the pastries and sandwiches makes it easy to just walk down the street and sit at Casey's, in front of the Plaza, or even up to Tomorrowland Terrace. I could hardly ever find a seat at the old Bakery, so the fact that they made more room for the restaurant itself is fine by me. 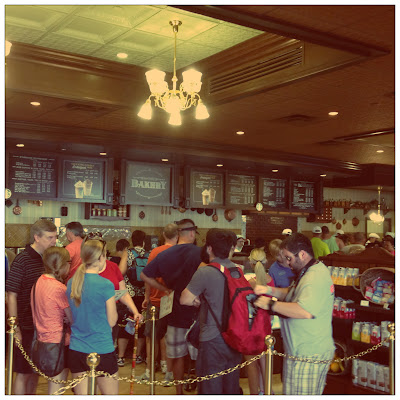 Another casualty that has plagued the Disney fan community is the loss of the Bakery's giant cinnamon rolls. By loss, I mean you have to go all the way to Gaston's Tavern.
Travesty I tell you. Instead we had to settle for breakfast sandwiches. All for research of course. Zack and I decided to split the Bacon and Gouda on ciabatta, and Sausage and Cheddar on an English muffin. So delicious and didn't make me regret eating it. I know, I know, you're on vacation and that stuff doesn't matter, but you have to see all of Gaston's antlers anyway! 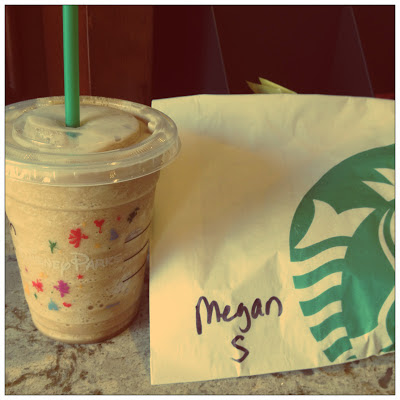 The look of the Bakery really hasn't changed much. They've really added to the old school Main Street look. Copper pans and china line the walls and sit on tall wooden shelves. There's even counters by the windows where you can relax and watch the Dapper Dans sing, or the Trolley show! They're the perfect size for kids to eat, or plop your coffee down. There's even hidden Sirens around-we found one on a plate, and a wooden one on a shelf, so Disney really can make everything interactive. 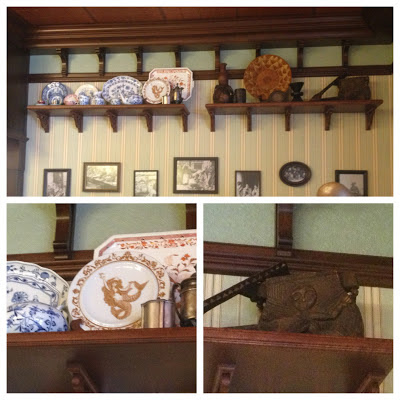 On another plus side, if you are a Cast Member or an Annual Passholder, your discount works on the merchandise offered at Starbucks. The prices aren't much more than a normal Starbucks, and every drink is offered as a snack credit if you're on the Disney Dining Plan. So while other think that Starbucks may have ruined Main Street, I think Disney has done a great job of integrating it into the Main Street Bakery.
Cheers!
Posted by Adam and Andrew at Wednesday, June 26, 2013