We're right in the middle of a terrific Disney World vacation...but I can't resist the urge to blog about the fun new Pirates Adventure interactive game now play testing at the Magic Kingdom!  We had the opportunity to experience the entire attraction from start to finish, and thought we would share some insight. 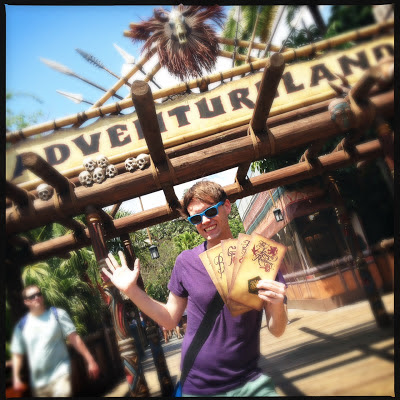 When I first heard about the new game opening in Adventureland I was a little worried.  In addition to the area being crowded to begin with, there was another interactive game (Sorcerers of the Magic Kingdom) already permeating its borders.  Though this day was an exceptionally busy day at the Magic Kingdom, the game was running smoothly and hardly interfered with guests that weren't playing.   The only instances where the game is an obvious hinderance to others is at the exit of Pirates of the Caribbean...where several interactive elements are located.  We all know that shop is already congested, with the addition of this game the crowd is almost unbearable. 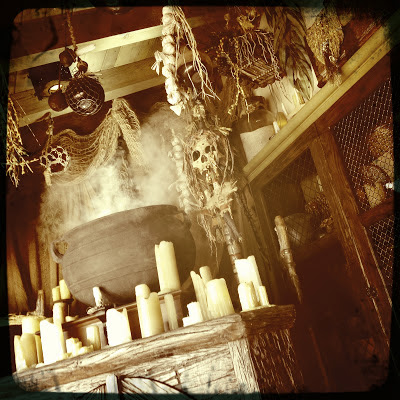 We will leave most of the story elements out of this review (you should REALLY experience it yourself...) but the basis of the game is a treasure hunt around Adventureland, featuring characters from the popular Pirates of the Caribbean movie franchise.  There are also fun memorable side characters involved in the game that are not part of the movies, which provide the majority of the laughs.
As far as art and aesthetics are concerned, this game is 100% Disney Hipster approved.  Sorcerers of the Magic Kingdom was good enough, but didn't blow us away. But this new attraction really stepped up the game.  First of all, there ACTUAL PROPS that you interact with (as opposed to the screens utilized in SOTMK) that are seamlessly integrated into the Adventure-landscape.  The props are gnarled, textured, well themed and should make any fanboy proud to be a Disney fan.  The props fit so well into Adventureland, that unknowing guests often lean on them completely oblivious the their purpose.  If anything, constantly having to interrupt people to play is the only real downside...though they usually got a kick out of seeing the exchange. 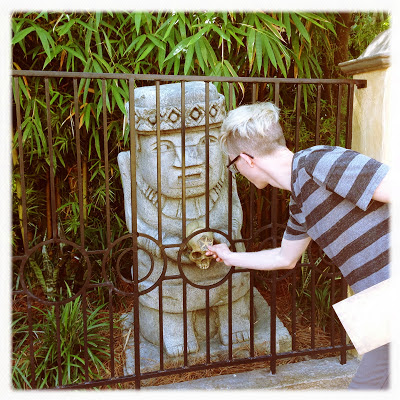 Gameplay is very simple, and seems to be aimed at a younger group than SOTMK, but we as adults enjoyed it quite a bit.  There are five "raids" in total.  Each game takes between 10 and 15 minutes, depending on how well you know the park.  We were able to finish all five in about an hour or so.  Be warned that there is a lot of running back and forth between prop locations, but no more than SOTMK obviously.
A Pirates Adventure is a welcome addition to The Magic Kingdom, and will help fill the day for many families with small kids.  I'm also glad to see a game which emphasizes running around, because I myself am a giant kid.  Besides the fact that the props blend in so well, when you DO notice them, they're just cool additions that shouldn't bother anyone.

Here is a video that we shot of one of the raids, THERE ARE SPOILERS...