Disney legend, philanthropist, and huge inspiration to the Disney Hipster Blog Annette Funicello passed away today due to complications from her long term battle with multiple sclerosis.  Simply known as "Annette," she was one of the original Mouseketeers and arguably the biggest Disney teen star of all time.  Beyond The Mickey Mouse Club her foray into movies ranged from 1959's The Shaggy Dog and 1961's Babes In Toyland to her infamous post Disney beach party movies. 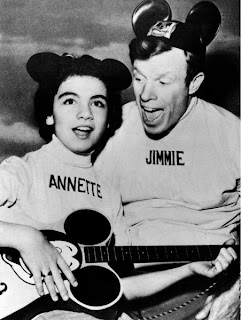 At the persistent urging of Walt himself, an apprehensive Annette jumped headfirst into a pop music career.  Her first hit Tall Paul was wrote by none other than Disney legends Richard and Robert Sherman, who went on to write several other songs for her.  She released many albums under Disney's Buena Vista Records, including Dance Annette, Italianette, and my very favorite Hawaiiannette.

One of my favorite Annette moments, this song is on Annette's first album for Disney.

Thank you so much Annette, for everything you did to make the early years of Disney so wonderful.  Your contribution to so many peoples lives cannot be overstated. The sense of nostalgia and fond memories that you bring to the world are invaluable. Thanks for making the world a better place, literally, and thanks for being you.
Posted by Adam and Andrew at Monday, April 08, 2013