There is a pretty good chance that I experienced Disneyland's classic attraction America Sings...sad thing is, I don't remember it at all.  I'm pretty sure I would appreciate this attraction on a deeply visceral level, the same way I do the Country Bear Jamboree and Enchanted Tiki Room.  Though not the last "great" attraction to be built, it is the last attraction in this style. 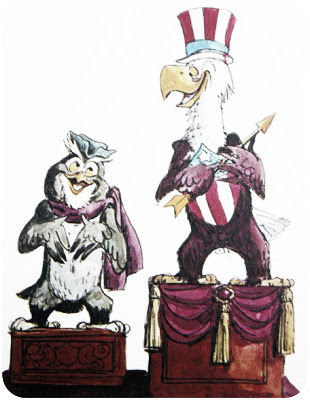 Over 100 anamatronic animals tell the story of American musical styles in a rotating theater. (ala Carousel of Progress.)  Hosted by an eagle named Sam (voiced by the incomparable Burl Ives) and his sidekick Ollie the owl.  The show traverses time, location, and musical genre.  Take some time out of your busy Monday to enjoy this super charming show.

The show lasted in Disneyland's Tomorrowland a full 14 years before closing, but never caught on the same way the Tiki Birds did. (or the Country Bears, for that matter)  There is a cult of people however, that still look back at the show fondly...and it even gets a quick nod during the Remember, Dreams Come True fireworks.
The soundtrack to America Sings is occasionally available on eBay...though it hasn't been released on iTunes yet.  Get with it Disney, this is a money maker.
Posted by Adam and Andrew at Monday, April 15, 2013