Along the bank of the Rivers of America, there is a special relic from the early days of Disneyland.  A petrified tree stump acquired by Walt in 1956 and was brought to Disneyland and presented by Lillian Disney in 1957.  She clearly wanted nothing to do with the thing.
Dated between 55 and 70 million years old, this tree clearly doesn't belong in Disneyland.  It's these small random bits of history that make Disneyland so special, as opposed to The Magic Kingdom.  Somehow it just works, and adds another layered element to the story. 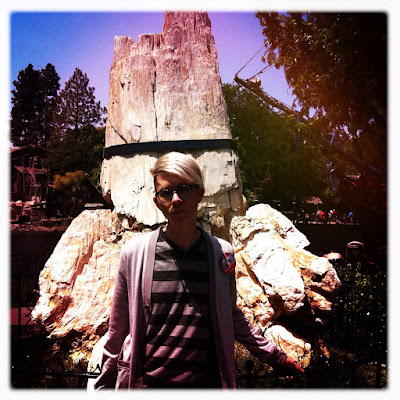 Petrified Tree
From The
Pike Petrified Forest, Colorado
This section weighs five tons and measures 7 1/2 feet
in diameter.  The original tree, estimated to have been 200 feet tall,
was part of a sub-tropical forest 55 to 70 million years ago in what is
now Colorado.  Scientists believe it to be of the redwood of sequoia
species.  During some prehistoric era a cataclysmic upheaval
caused silica laden water to overspread the living forest.  Wood cells were
changed during the course of time to sandstone.  Opals were formed within the
tree trunk itself. 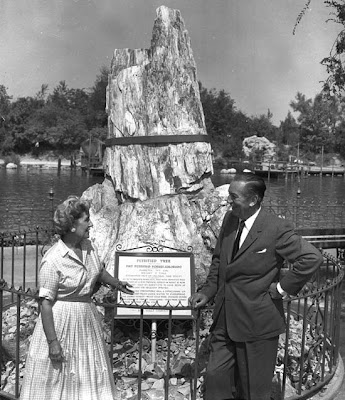