Hey! Look at me! I'm in a super giving mood this week...probably because I'm so excited for our first north east meet up!  In being so excited/preoccupied this week, I thought I would keep things on the positive side, even if we're at Hollywood Studios!
Like I've said on Disney Hipster Podcast, I don't HATE the studios. But I also don't love this park either, like at all.  But I've come to terms with this, and being the fair person that I am I've worked very hard to find things about it that I can tolerate.  It is, after all, really hard to avoid this park on a 14 day trip.
One of the fun things about Hollywood Studios is the semi-regularly rotating cast of meet and greet characters.  We went out of our way in October to meet a few. Not exactly sure what I'm gesticulating wildly about. But Adam seems amused.  I've found that sorcerer
Mickey usually has a shorter wait than at other parks. 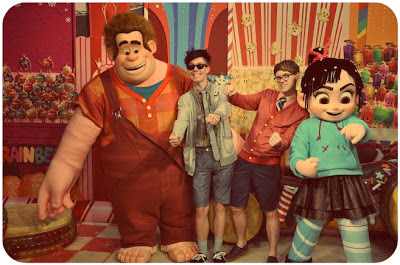 Characters in the animation building are usually swapped out every year, with the release
of the latest animated film. Ralph and Vanellope were big hits this year... 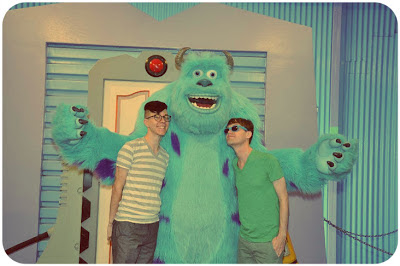 A long term resident at Hollywood Studios, Sully.  Does anyone know if Mike appears here as well?
Also, why isnt this a Pixar park. Seriously. :/ 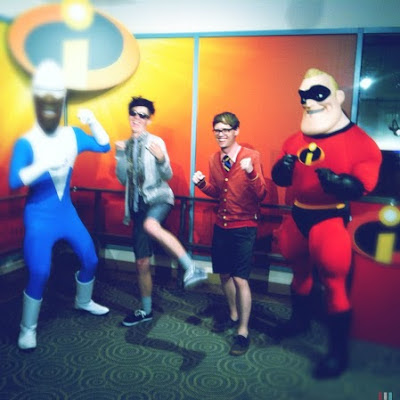 I know this shot is blurry, but it includes the WORST KARATE KICK EVER. Seven year old Andrew
would be so disappointed with what he's become.

We actually had a blast meeting with characters on this trip...32 new ones in total.  If you find that you need to kill time while waiting on your Brown Derby reservation why not meet a few fun friends?

Posted by Adam and Andrew at Wednesday, February 20, 2013