Coverland: Everybody Wants To Be A Cat

Welcome back to Coverland!  It's been a while since we've visited this series, but I've been meaning to get around to it since the last installment (Lets All Sing Like The Birdies Sing) back in May.  Coverland is where we take the time to appreciate a few cover versions of classic Disney songs, so that we might consider their proper place within Disney history. 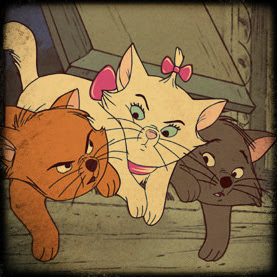 Today we are diving into Everybody Wants To Be A Cat, the standout Sherman Brothers song from the 1970 animated classic The Aristocats.  Clearly jazz will be the prominent sound here, but I'm surprised by the diversity that I was able to dig up...

British band Psapp put a wonderful spin on the classic, which was released on their 2006 Tricycle single.  Pretty standard at the beginning but gets a little nuts and awesome toward the end.

Yes! An absolutely charming version by French group The Boop Sisters from their 2011 album Bibidi Bobidi Boop! Try to not love this version, I dare you.

This Brian Setzer version is exactly what you think it is.

And then there is this SUPER MAGICAL cover by Tiffany Ensemble which is apparently a badass German group.  Really great. They need to do a few more Disney songs. :/


Do you have a favorite version of Everybody Wants To Be A Cat? Did I leave off anything significant?  Let us know over on Twitter!
Posted by Adam and Andrew at Monday, February 11, 2013