China has never garnered much appreciation with Disney fanboys. In fact, this pavilion is often hung out to dry in "best and worst" style discussions.  Truth be told, there isn't much to do here.  The restaurants are notoriously blah, and the shop is nothing to write home about. (especially being from the NYC area...) The pavilions Reflections of China 360 film is wonderful...but that is hardly enough to draw the crowds.
As uneventful as the activities are in China, the atmosphere is top notch, and I've always fancied this pavilion as one of the most beautiful. Digging a little deeper does help us appreciate the architectural details. 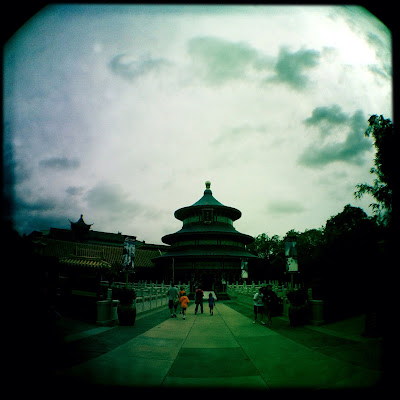 Dominating the pavilions ambiance is a detailed recreation of Beijing's famous Temple of Heaven.  The temple dates back as early as 1406. Despite the peaceful intention of the temple, it has been occupied on several occasions during times of war.  Though only one of several enormous temple complexes in Beijing, the Temple of Heaven is the most popular...both for tourists and residents. 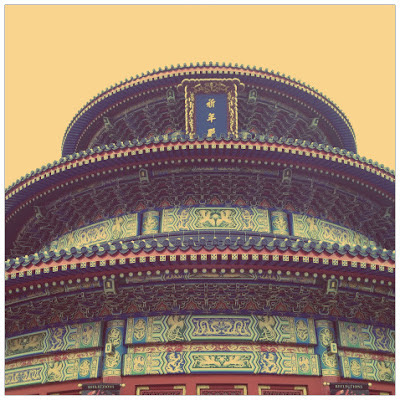 detail of the Temple of Heaven

The temple acts as a proverbial carrot, drawing us into the pavilion.  No doubt some sort of forced perspective is used making the building seem more grandiose than it actually is.  The wonderful thing here is that there is a payoff in the end.  Not only is the under rated Reflections of China film found here, but also a small museum housing gorgeous Chinese artifacts.
If the Temple of Heaven is the detailed piece of art, then I suppose the frame of the pavilion is the traditional Chinese style triumphal arch, or paifang gate...located at the entrance.  Originally paifang gates were used as official markers between districts in large cities and towns, making well defined borders. 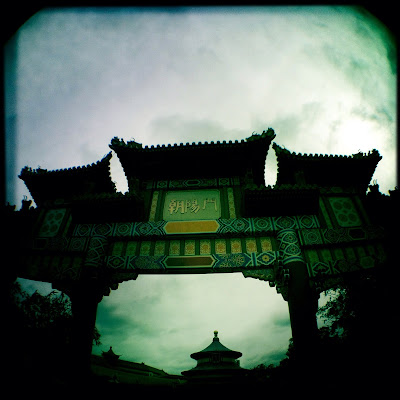 The paifang remain prominent in China, and are found in Chinatowns throughout the world, again, setting the boundary for that neighborhood. 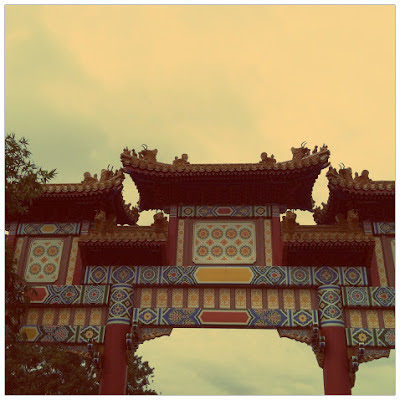 Super cool, huh?  There are several other buildings and details in the China pavilion and I'm excited to grab photos on our next Disney World trip!  I cant wait to find the origins of those! :)
How do you feel about the China pavilion?  What about those lousy restaurants?  Let us know on Twitter! @disneyhipsters
Posted by Adam and Andrew at Wednesday, January 09, 2013