While reading Osa And Martin: For The Love Of Adventure, I was struck by a photo of Malakula tribal chief Nagapate.  Not so much by the off-putting stare of the man himself, but the amazing totems that surround him. 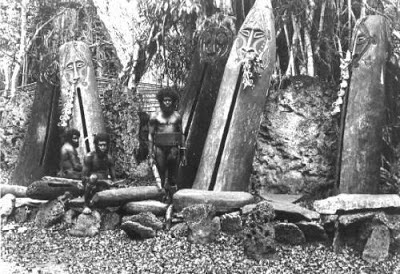 The island of Malakula is located far off of the coast of Australia and is the second largest island in a cluster making up the nation of Venuatu.  Its remote location made it ripe for unique cultural evolution. Among the rare endemic offerings?  Giant slit drums (or boo-boos) with intricately carved "tiki gods!" These drums were used for dancing and ceremonies, but also as a way to communicate from farther distances with members of the tribe.

Though a video of these grandiose drums being played is apparently quite hard to find, smaller less intricate cousins are still made today.  The idea remains relatively similar.  A slit is made through the center of a single trunk of wood.  When stuck it resonates a melodic percussion associated with tribes in the south seas.  Here is a video of a bamboo slit drum:

Not only did the imagineers get the Adventureland Tiki Drums sound perfect, but the look is a great example of exaggerated reality.  Personally, I never realized that the mouths of the tikis were the source (or supposed source) of resonation...I just thought is was terrific stylization. 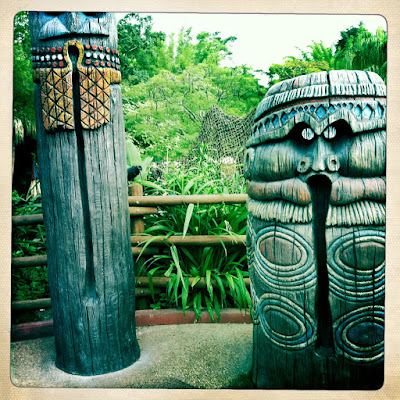 and never forget this...
Posted by Adam and Andrew at Thursday, January 03, 2013