So with the official Grand Opening of New Fantasyland quickly approaching, I (Adam) decided to share a bit of my take on it. Consider the following thoughts limited to the main area of New Fantasyland minus Storybook Circus which I consider to be a separate area. Andrew already shared his review here. Despite the fact the its not technically opened, we, like most everyone else, have visited it twice. We were able to experience it during cast member previews, as well as a very short walkthrough during MNSSHP.  That being said, New Fantasyland is much like a human being...well formed on the outside and gross on the inside.


Even if you haven't been there, you've seen the pictures. The land itself is beautiful. The overall design aesthetic really really works. They were great about giving everything texture and a sense of age. This trend in theme park design started with the wonderful Animal Kingdom Park and they've definitely applied what they've learned as of late. And then they stopped. 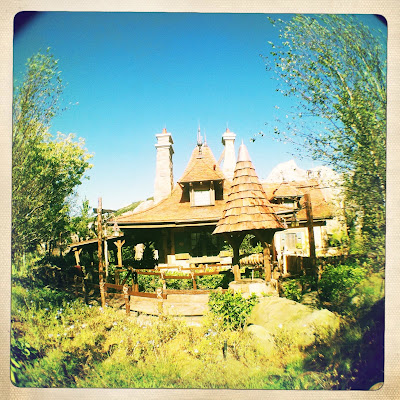 I imagine someone important in imagineering must have died after the facades were designed, because I can't fathom what else could have happened. Some of the interiors are great like Gaston's and a couple of the animatronincs in the Horrible Tales with Belle and the Little Mermaid attractions, but the majority of the interiors and experiences are a big giant badly designed boring wastes of time, money and space. When we were unfortunate enough to experience the embarrassing Enchanted Tales With Belle,  Phil Holmes happen to be in it as well. They were standing in the back with their leather bound note pads looking very pleased with themselves. It just had a very corporate air about it and I think thats the problem. The imagineer's were left to freely design the outside spaces so they look great. The insides are clearly what the corporate research teams have determined people want. I'm not going into too much more detail, by the Belle experience is awful from the room/costume/prop design and Ariel's Undersea Adventure is a people eating, overly complicated, dark ride with no soul. Their ultimate goal was to add more park capacity to the Magic Kingdom and to increase the number of attactions the normal guest can ride in a day, and I think they accomplished that. But thats it. This land will not be like Fantasyland, Adventureland or Frontierland. It will not be Timeless. It will not be nostalgic. It will not be loved.
Posted by Adam and Andrew at Monday, November 26, 2012