I've never had the pleasure of becoming acquainted with Mouse Works , the show that tried to revive the short cartoon genre in 1999.  It seems like the sheer number of cartoons the company made for this show would equate to something kind of special...eh, not so much.
The abundance of Mickey shorts produced in the late 90's have not proven to be all that significant in the general context of Mickey Mouse.  The atmosphere is very much like the Disney Afternoon cartoons that I grew up with...only a decade too late.  The characters themselves are flat shadows of personality...shadows who talk too much.   It almost seems like the writers are trying to make up for lack of gags with the inclusion of rampant dialogue.  I've never heard Mickey and Donald have such long conversations before.  What is it about the late 1990's that required them to be such chatterboxes? 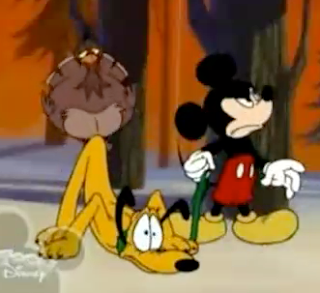 the only thing that works? The turkey.

Gags that worked well in the 1930's are replicated here but are lacking the comic timing used before.  The stiffness of the characters are now entirely apparent in their post modern context, losing all of their naughty charm. The only exception in Turkey Catchers is a gag in which both Goofy and Donald dress up as female turkeys.  Funny thing is, I doubt this joke would be included if made today, a mere 13 years later. Thanks a lot LGBT for messing things up again...
The only legitimately funny moments come with the turkey himself.  He doesn't speak, but makes an adorable and random turkey noise.  His randomness is what translates to comedy now, in a time where kids cherish all things bizarre.

What do you think?