New Fantasyland has given bloggers and Disney nerds plenty of jumping off points for discussion over the last few years. In fact, I've never seen the 'community' get so riled up over such silly things.  Now that part two is all but open, and the large majority of Fantasyland is accessible to the public, I figured that I would share a few photos and opinions.  (I'm SO with the times, right?)
First of all, Fantasyland is gorgeous. This is, by all means, a new land in the Magic Kingdom, and a testament of great design.  The Imagineers are riding a wave of success after the massive California Adventure refurb/redesign.  It is wonderful to see extensive theming once again in our parks, especially the Magic Kingdom, considering little has been added to this park in 40 years. 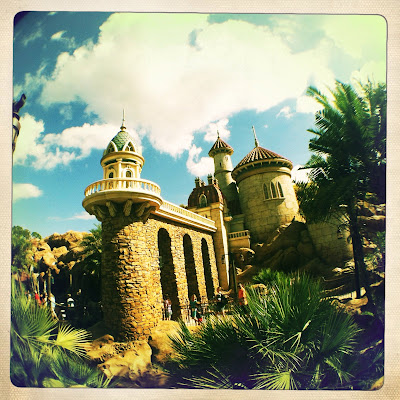 The facade for Ariel...

The area is ripe with plant life, water features, and almost exhaustive rock work.  This is a whats what of themed areas.  The fact that there are trees in the Magic Kingdom is a huge novelty, seeing that they were all but impossible due to the utilidor system underneath the vast majority of the park.  The trees play a mighty important role in our new land, acting as a buffer between other areas, as well as adding story. (are we still calling this Fantasyland Forrest?) 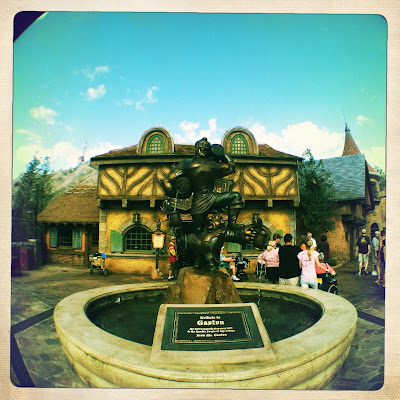 The big problem with New Fantasyland isn't the theming, or general feeling of the area. It is the underwhelming/horrible use of space.  I understand that in Disney World guests love having space. Trust me, I'm not into sweaty tourists touching me either...but this land is MASSIVE with hardly a thing to do!
The value of adding two new dining options in this park cannot be understated.  But the fact remains that this whole land is built on the shoulders of dining!  With the subtraction of Snow White's Scary Adventure this past May, we are basically left with the same number of actual attractions until the mine coaster opens in 2014.  The addition of this area to the park creates a lot more capacity, upping the horrendous number that the park already allows in during the peak times of year.  Problem is, what are people actually going to do?
"They" say that the average guest to theme parks are content with their ticket if they can experience ten attractions in a days time.  The problem here is that most guests will not consider a meet and greet experience as an attraction. Though I'll leave all the bitching about Enchanted Tales With Belle to everyone else...I could see most adults considering this an enormous waste of time. (for the record, I actually liked it quite a bit, because I'm a huge child...) 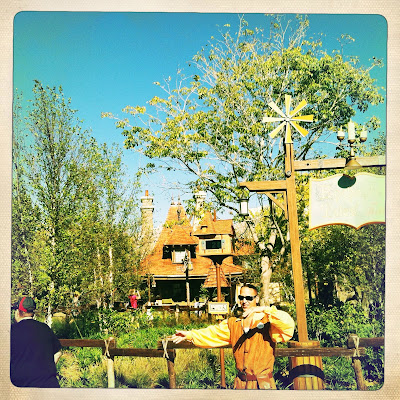 When compared to Disneyland, and it's tremendously resourceful use of space, New Fantasyland is a joke.  Somehow, Disneyland's tiny little Fantasyland includes FIVE dark rides, the canal boats, Casey Jr, and the standard Dumbo/carousel/teacups.  In an area of this magnitude you would think that they could squeeze in another few attractions as opposed to say, one.
In the few hours that we spent in New Fantasyland we were able to experience everything that it had to offer...including both meet and greets.  Though I'm sure I'll experience the Ariel attraction pretty much every trip, the time spent in this area will be limited.  I would much rather spend my time in Adventureland. (theming, AND attractions! What?!?!)