Disney is kind of the king of compilations.  If you think about it a giant portion of the company's film output was indeed packaged shorts, and then perhaps repackaged.  A lot of times these might be in the form of a themed clip show...and what better theme than Halloween?  If there is one holiday that Disney dips its finger in (out side of the parks anyway) its Halloween.
As a little kid in the 1980's and early 1990's I grew up with Disney's Halloween Treat, which is indeed one of the better clip shows.  Besides the truly creepy jack-o-lantern host, who is both awful and amazing at the same time, the clips are very well chosen.  They seem all over the place, but actually give a pretty well rounded view of the more frightening Disney animated shorts, plus some great villain songs thrown in for good measure.  I'm probably reading too much into it, but the placement of Mad Madame Mim next to Fantasia's Night on Bald Mountain is particularly inspired. 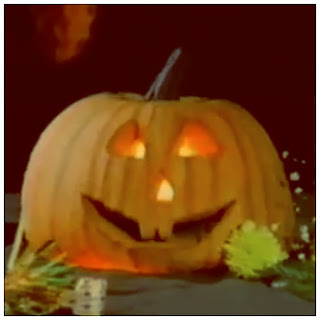 creepy host...
This show ran each year, more or less the same from 1982 through the mid 90's...creating a long enough span to really attach itself to kids memories much in the same way that the Disneyland tv show had.  Besides the creepy host, the main original component was a bouncy theme song written by Galen R. Brandt with music by John Debney.  The song is a wonderful contribution to the giant bucket of Disney original songs:

here is the full song...

Besides the main clips of the show, the intro/outro song includes great clips from The Lonesome Ghosts as well as my favorite Silly Symphony, The Skeleton Dance.  Despite being just a clip show, I think the addition of both an original host (whose voice is admittedly bored sounding) and a catchy song makes this show stick out.  With nothing to take its place, and no DVD release, we've been left with bad youtube versions.  Perhaps Disney should dust this one off and give it another go. Yes?
Posted by Adam and Andrew at Wednesday, September 12, 2012