If you followed our ridiculous first trip to Disneyland you may have noticed our affinity towards the Alice In Wonderland dark ride.  In fact, Alice ended up being the first attraction that we experienced at Disneyland...tough choice, but somebody had to pull the trigger.
Opened in 1958 Alice In Wonderland was among the second generation dark rides at Disneyland and not among the elite opening day attractions.  In many ways this helped the attractions appeal. A new attraction opening in the park was always big news and this time Imagineers had enough time to mull the dynamics of the ride over before jumping the gun.
Although the Disney animated classic version of this story had been relatively overlooked by critics, audiences, and Walt himself...the decision to build an attraction was inspired.  Where the movie (much like the source material) is derailed from the beginning, the attraction's story is squeezed into a short timeframe of three and a half minutes.  All of the important scenes and characters are represented and oddly enough, the story itself flows very well. 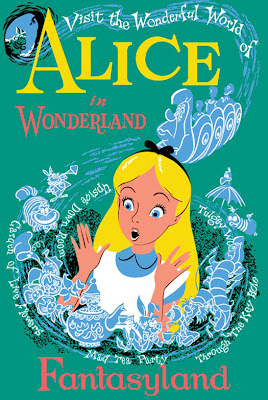 One of my favorite attraction posters. Why is she so scared?


In 1983, part of Disneyland's "new Fantasyland" the ride went through a major overhaul. The inclusion of Kathryn Beaumont (the voice of Alice in the animated film) provided a consistency to the attraction that had been lacking prior. Though her voice had become slightly worn during the 30 years in-between the movie and the attractions refurbishment, there was still Alice lurking in there somewhere.  As it turns out her voice had lowered ever so slightly, and her voice was simply raised half an octave to achieve that classic "Alice sound."   Kathryn's soft gentle voice pulls us through Alice's adventure.
In addition to the narration, the ride is supplemented with a wonderful re-orchestrated version of the films phenomenal Oliver Wallace score.  Particularly charming is an alternate version of Golden Afternoon.   Here it features a more baroque-folk sound ripe with pizzicato strings and wonderful choral arrangement.  In the Painting the Roses Red segment of the attraction Thurl Ravenscroft, who was in the film as well, is featured much more prominently somehow improving upon the original.

As important as music is during this story, it can only take us so far.  The visuals of this attraction do not disappoint.  The most extravagant of the scenes is the flowers/Golden Afternoon.  Dozens of giant brightly colored flowers, including our favorites (the main Rose...and that bitchy Iris) are represented here singing. Alice herself is included in this scene...the CREEPIEST MOST AWESOME ALICE EVER... and a perfectly vicious Queen of Hearts. 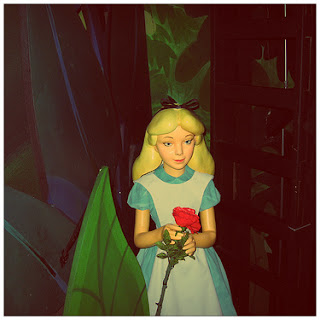 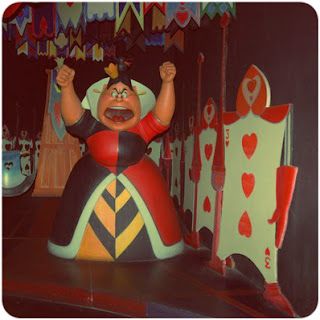 Oddly enough, Alice In Wonderland is an underrated attraction, especially in the realm of Fantasyland dark rides.  With Mr. Toad and Peter Pan within a stones throw, poor Alice's attendance suffers. Even her sister attraction The Mad Tea Party demands a larger audience.  We didn't know what to expect upon queuing up for Alice, but we had NO IDEA of the wonderment that we had been missing.

What's your favorite Disney dark ride? Let us know, via Twitter! @Disneyhipsters
Posted by Adam and Andrew at Monday, September 24, 2012