I get immense joy out of delving into obscure Disney actors.  It seems like every day the veil is lifted a little more, and my contemplation of the company as a whole is more rounded.  Though I'd known of Disney's use of live action models for their early animated films, I was pretty unaware of particular models. (yes, I know Margaret Kerry, but who DOESNT know Margaret Kerry?)  Such is the case with Helene Stanley.
Stanley had worked for MGM at the beginning of her career making only a small impact on the silver screen.  It wasn't until her underrated role as a model for Cinderella, Aurora, and Anita (101 Dalmations) that Stanley's star would be cemented in history.  Under the supervision of Marc Davis, Helene had to be able to move fluidly and gracefully across the stage, giving the artists all aspects of the characters movements. 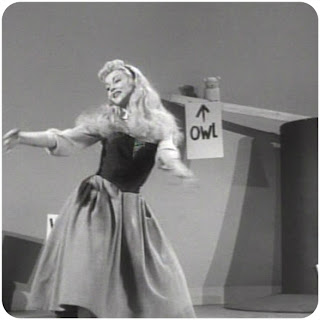 In addition to her animation model work, Stanley went also appeared briefly in the Davy Crockett series as Davy's wife Polly.  She also made a memorable appearance on The Mickey Mouse Club...


In developing some of the most beautiful animation ever created it was of the highest importance to decide on the perfect actress to stand in.  Helene didn't only look the part, but she embodied the fun, subtle humor of the heroines.  Just look at that wicked skirt twirl!!!
Posted by Adam and Andrew at Monday, August 13, 2012