When imagineering revamped Tomorrowland in 1994 they included one of the real hidden gems of the Magic Kingdom, Sonny Eclipse.  Performing a 25 minute show on an almost continuous loop at Cosmic Rays Starlight Cafe, Sonny brings a wonderful whimsy to an otherwise austere section of the park.
In order to get more bang for their buck, Sonny's animatronic was made from a model of Captain ZZZYXX, from the Star Tours attraction at Tokyo Disneyland.  The captain is a Zorkie, like Sonny, and is indeed Sonny's cousin.  Unlike Sonny who is from Yew Nork City...ZZZYXX is from Joo Nerzey. 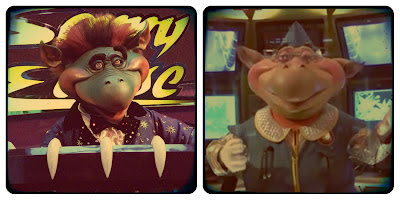 Captain ZZZYXX is a baggage screener at Star Tours:


So, sure...he isn't a charmer like his cousin, but ZZZZYXX is doing a darn good job keeping Star Tours safe!   Thanks to our friend on twitter @Q_GS for inspiring this post.  Finding decent video of this guys is NOT EASY. :)
Posted by Adam and Andrew at Monday, August 13, 2012