Certainly the most frowned upon area of the entire Walt Disney World resort is the Dinoland USA section of Disney's Animal Kingdom.  Though a lot of the hatred is unwarranted due to severe misunderstanding, it stinks to see such a charming area get the short end of the stick.
Considered by many an "E-Ticket" worthy attraction, Dinosaur (originally Countdown to Extinction) is another greatly misunderstood attraction.  People complain that it is TOO dark and TOO loud and TOO bumpy, but in a park severely lacking in thrill rides this is a welcome addition.  Imagine the park on opening day with NO Expedition Everest! Where would your hatred be then, friend?

Here are some very early concept drawings for the original attraction, circa 1993: 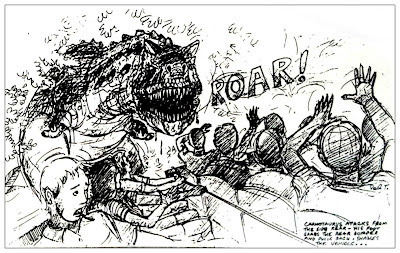 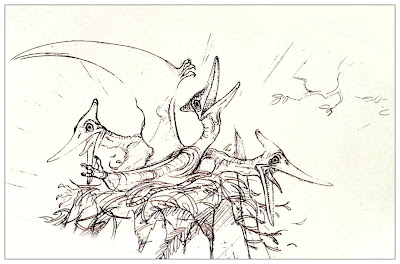 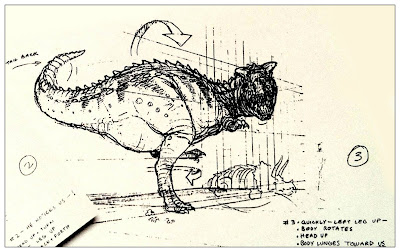 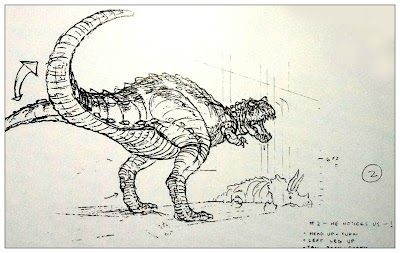 From The Making Of Disney's Animal Kingdom Theme Park:
Walt Disney Company CEP Michael Eisner felt the dinosaur safari lacked excitement. In the summer of 1993 he suggested using the budget to make an E ticket for DinoLand U.S.A. The attraction would move indoors, becoming a jolting, lurching, thrilling dino encounter.  Changing combinations of effects would ensure that guests never saw the same show twice.  The Imagineers went back to their concept for Dinoland U.S.A., itself - the conflict between chaos and order, authority and disobedience, youthful, creative minds vs. stodgy, controlling brains, and the park's overall theme of the weakness of technology in the face of nature - and began to work out the details for Countdown To Extinction.