The idea of Disneyland developed in Walt Disney's mind long before the park came to fruition.  The basic design was far from polished when he finally started building his park, though the idea of basing each themed land around a common movie genre was in place.  Tomorrowland could be the home of space travel, rockets, and in a more broad sense future living here on Earth.  Frontierland the home of America's beloved westerns. (and apparently most period pieces, according to Walt.)
Where does that leave Adventureland?  Included early in the process was the idea for the Jungle Cruise attraction, fleshed out to realization by Harper Goff.  And there you have it, an impressive ONE attraction, albeit a large scale powerhouse.  The thing about The Jungle Cruise is that it doesn't take place in one specific part of the world.  The time is roughly toward the end of British Colonialism, based on main inspiration The African Queen.  The concept for Adventureland itself is essentially the same idea, an amalgam of cohesive themes centered around the ultimate hodge podge of cultures: Tiki. 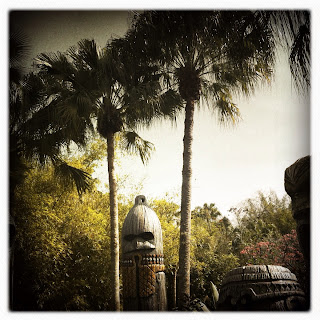 Used in trade routes for centuries, the Polynesian islands melded together slowly over time mixing with Western traditions creating a beautiful and bloody melange of cultures.  Wooden tiki statues from Eastern Polynesia mix wonderfully with Cantonese cuisine...as does rum punch with ukulele ballads.  It is this made up culture that charms us so.  Because nobody would recognize this as their own way of life it is indeed an adventure for all. 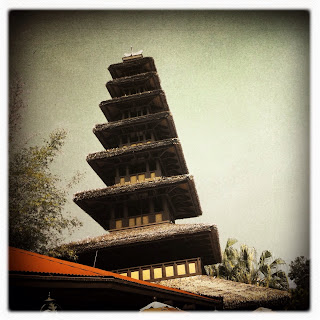 None of the real "tiki" based attractions show up in Disneyland until after the peak of tiki culture in 1959.  The Enchanted Tiki Room appears in 1963 alongside the Tahitian Terrace restaurant and show. Though the Swiss Family Treehouse bares no direct tiki reference they too are on an unnamed island probably in or near Polynesia. (they were on their way to New Guinea.)   By not getting too specific Disney can create magic for all people, regardless of where you're from.
Tiki architecture itself, featured more prominently in Walt Disney World, is fanciful by nature.  Sharp angles mixed with organic materials create natural intrigue for guests.  The use of faux thatched roofs make the transition into the jungle seem natural, while the glass windows and formica invite you to sit and enjoy a Dole whip.

Walt could have gone in any direction with Adventureland.  The True Life Adventure series was immensely popular at the time, and lord knows wild animals were included in the land, but the inclusion and emphasis on a made up human culture is what defines this land.  By creating a new world in which to tell the story Disney can create adventure.
Posted by Adam and Andrew at Tuesday, August 07, 2012