In Defense of WDW: Take A Chill Pill

Summertime around our house can be a gloomy time.  We DO NOT visit Disney parks during this busy time, thus creating the longest period of time between trips. We've made it through these lean months every year so far, but something about this upcoming October trip to Disney World has us both stricken with new zeal and anxiety.
It is normal for us to act like crazy little kids on Christmas Eve in the few months leading up to an extended WDW vacation, but this one is particularly menacing! This reason? Disneyland did it.  In the long winded anticipation of our first Disneyland trip we managed to get all caught up in the hype of Disneyland. (which we absolutely love SO MUCH in a totally different way.)  Walt Disney World, the amazing Project Future, though technically more popularly attended is often times regarded as an evil step sister of Disneyland.  But Disney World is something that Disneyland was never meant to be, relaxing. 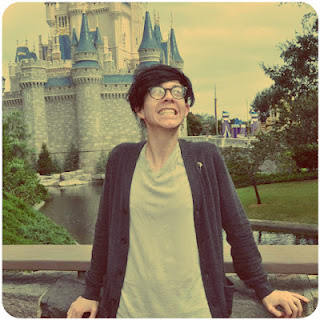 Ugly castle, but at least I'm not having a panic attack...

We understand the resentment toward the world that many park fans have. The gaudy nature of the design in the Magic Kingdom has been the topic of conversation in our home many times. And though that park does in fact pale in comparison to Disneyland's unique and unexplainable charm, there are also unique/unexplainable/wonderful things about WDW as a whole, especially outside of the Magic Kingdom.
When entering into a conversation with a diehard Disneyland fan, remember that they have a mission. Specifically, a mission to destroy your ego and make you feel horrible about even considering Disney World a worth while place to visit.  Inevitably they will mention how "this is Walt's park!" or "this is where Walt walked!" and there will be nothing you can say about those statements.  In all fairness, Walt did walk around Disneyland...and upon doing so, quickly realized the faults inherent to the worlds first theme park.
The fact is that Walt Disney World is, and always has been, closer to the vision that Walt wanted for his theme parks.  This resort is aptly named in tribute to its creator, being a somewhat true to form idea that Walt had for a vacation kingdom, as the nickname was in the 1970's.  Extensively themed and wonderful resort hotels, functional and sleek transportation, and tons of recreational options all act in a symbiotic relationship with The Magic Kingdom, and subsequently the other three theme parks.  All of this is fine and dandy on its own, but added to the mix, something that no Disneyland fan can ignore, is sprawling green wilderness surrounding the area.  These swaths of land act as a buffer from the outside world. 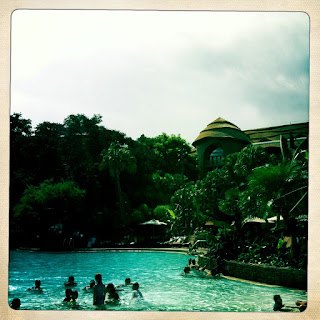 Upon entering WDW property you are immersed in a carefully constructed sense of ease.  Whether or not your objection is to relax (we all know it can be challenging when all you want to do is tour the parks.) Disney makes the option easy and accessible.  Each resort is lousy with pools / pool bars all wonderfully themed in a variety of styles to suit all people.  In being immersed and secluded at the same time we have the ability to forget reality.  This sense of wonderment is promoted further by the cast members eager to accommodate any problem that might arise and make your trip more relaxing.
Disney World is huge, and getting from one destination to another might be daunting.  The distance between themed areas isn't just to annoy bus drivers, but in separating the areas by green landscape it creates effective transitions from one area to another.  The jarring lack of transition at the Disneyland Resort creates an unintentional anxiety that is hard to shake when visiting those parks, that I can only equate to living in NYC.  The feeling is surprisingly similar. (to be fair, inside the Disneyland park is actually pretty well guarded from reality...)  Walt Disney World is the ultimate place to chill the $&%@ out.  Our day to day lives are filled with obligations to work, family, and social lives...and those can all go to the wayside.
Just before entering the property, take in the biggest deepest breath you can.  Slowly exhale and let all your worries out.  This resort is meant for relaxation in a way that Disneyland could never be.  This is why Disneyland can never take the place of Disney World as our home resort.  The ability to let go of the outside world is a hard task to achieve, but the measures taken at Disney World make that a distinct possibility.  If only I wasn't so obsessed with 8AM rope drops...
Posted by Adam and Andrew at Monday, July 16, 2012