Getting To Know Norway...

One of the joys of being a devoted Disney parks fan is investigating the subtle and extensive lengths in which the Imagineers will go to immerse you in a story.  Epcot is particularly ripe with fanciful, adventurous, exhausting themes.
Unlike most of Disney World, Epcot's World Showcase is NOT based in fiction but real life places.  I haven't had the good fortune of visiting any of the countries represented (a little sheltered, yes.) but am very curious as to how these wonderful pavilions held up against reality.  So, enter the children's library... 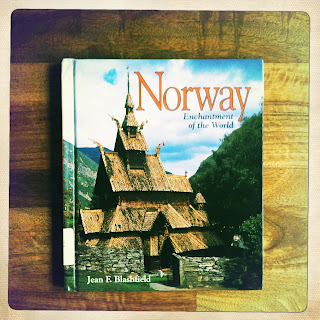 Look Ma! I can read!

The Norway pavilion has always stood out as one of the most immersive themed areas in any theme park.  The wonderful rock work, network of interconnecting building styles, landscaping, and background music all fit seamlessly within the small context of the pavilion.  This creates the ultimate staged setting for transportation to  another place.  I love it. ( evident here, here, and mostly right here.)
To further my appreciation for the area I picked up a few books on the history of Norway at our local library. (yes, in the children's section)  I was mostly curious to the amount to details in the pavilion that were not a good representation of the actual country. As it turns out, the imagineers did a pretty bang up, amazing job at portraying the country accurately...at least from a historical sense.
The fun starts on the cover of the book which features the Borgund stave church, which served as the inspiration for the stave church replica in the pavilion. I'd say that was a definite design win...right?  Continuing on our book tour, we find several great examples of good imagineer inspiration. 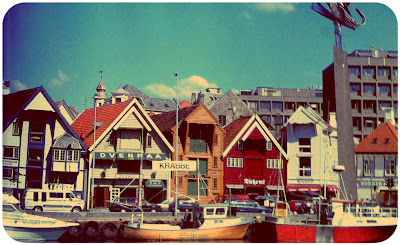 The picture above is the seaside city of Stavenger, which has a striking resemblance to the unloading area of the Maelstrom attraction! I wonder if it has that wonderful Maelstrom smell, or if it just smells like cod...
Another terrific detail found in the Epcot version of Norway is the simple whimsy of the grass roof located above the seating area of the Kringla bakery.  This is one of the details that seemed too good to actually exist in the world, but apparently this is a real thing. 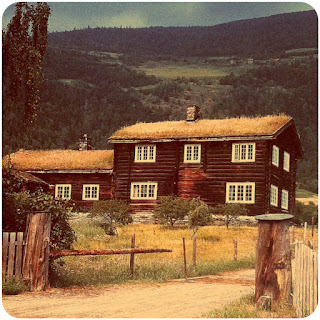 One of the most bizarre scenes in any Disney attractions is the final scene in Maelstrom.  After being cursed by trolls and plunging down a waterfall we find ourselves on a storm ridden ocean surrounded by oil rigs. (some of which are on fire.)  I find this scene particularly weird. Are Norwegian's really THAT proud of their oil production?  As it turns out, yes...kind of.
Apparently the discovery of this natural resource off the coast of Norway led to the huge economic growth the country felt in the decades after World War II.  The war had been devastating to the country, which was occupied by Nazis for five years.  Without its petroleum and natural gas deposits, Norway's growth would have stalled considerably in the second half of the 20th century. (also, because I'm still turned off by it, I should mention that they also have the best record of safe off shore drilling...) 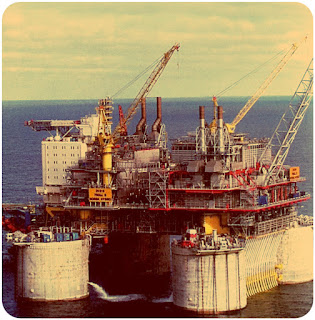 Though this book is geared toward children, I found it incredibly interesting.  Perhaps it is in part to my Disney filtered perspective on the country, which as it turns out is pretty accurate.  Even the school bread at the Kringla is relatively authentic, according to the young ladies that work there.  Next time I'm in Epcot I will rest assured knowing that my hero imagineers did their homework in studying the beautiful source material.
Mmm. Now I want a school bread.
Posted by Adam and Andrew at Sunday, July 01, 2012