Over the course of the last few years we have become legit character stalkers.  No, we don't visit character based sites (too often...) or go bat shit crazy when we see characters (too often...) but we do get pretty darn excited at the idea of meeting a more rare character.  The problem with this?  The more obscure characters often have HORRIBLE UGLY costumes! Ack.
This past year we went to our first Not So Scary party and had the best time ever.  In doing so we also had a chance to meet less common meet and greet characters.  Even the fab five were all done up in their Halloween get ups!  Problem is...they mostly kind of sucked, including this little lady: 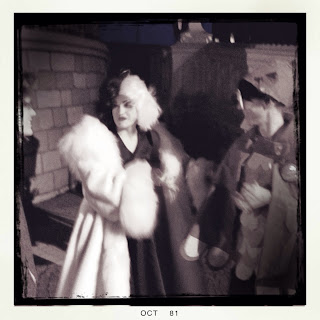 Though I really love the idea of having a Cruella Deville meet and greet somewhere permanently at a park, her costume could really use some work.   The main problem here is her wig.  Most would argue that Cruella's hair is her defining trademark, therefore the costume should accurately portray that.  Problem is, that the wig is made out of cheap plastic hair.  Just look at the (bad) photo above...it looks like she's wearing a hat!  A wonderful lace front wig, with real human hair could fix this.  Plus it should be dusty as hell...
In addition to her bad hair, the black dress should be form fitting.  I like to think of Cruella as an aging sex symbol who still thinks she has the goods.  Also, the young lady playing the part should be PENCIL THIN....but that is more of a casting problem. 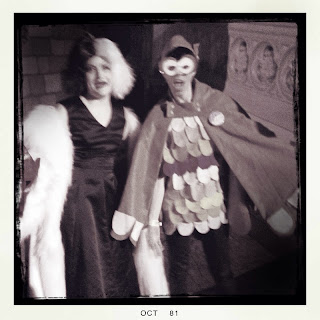 I have no real problem with the coat.  Sure, I would prefer if it was made out of puppies but puppies are expensive, and if they aren't going to buy the girl a proper wig they sure as hell aren't rushing out to buy her a pricey puppy coat.
The point is, Cruella is an amazing character with lots of personality.  She is at the top of a lot of peoples villains lists and is a wonderful high water mark as far as animation is concerned.  But her walk around costume should reflect the respect that she is given.  As of right now she looks like a hot tranny mess...