Five Things You Can Do Instead of Cars Land...

Today, while everyone (except you) is clamoring to get on Radiator Springs Racers...we're all sitting at our computers hoping for new photographic evidence that Cars Land indeed exists at DCA, and that it in fact kicks total ass.
Well friends, do not dismay!  Cars Land will still be there tomorrow...and even NEXT YEAR when the crowds have diminished significantly.  You can still go to Disney California Adventure in the future.  But what about today?  How am I possibly going to make it through the rest of this depressing Friday....hmm.  Here are a few ideas. 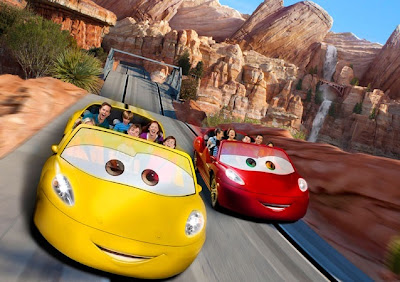 Lucky enough to be here? yeah, me neither.

Number Two: Get into the Epcot spirit and listen to this Epcot playlist while doing your Friday chores:

Number One:  Spend the Afternoon reading about Disney Food:


Anyway, don't get down on yourself.  Imagine all the little kids you would have to be avoiding if you were indeed in DCA right now.  Doesn't seem too glamorous eh?
Posted by Adam and Andrew at Friday, June 15, 2012