Why We Love Disney California Adventure

Our preconceived notions about Disney California Adventure had been shaped from years of bad press and word of mouth.  Usually we can buck these as bad opinions, but the onslaught was so heavy concerning this park that it was impossible to ignore.  We went to California expecting to hate DCA like most good Disney fans...in the same frustrating way that we hate Disney's Hollywood Studios.  Small park, nothing to do,  and don't like the theming. 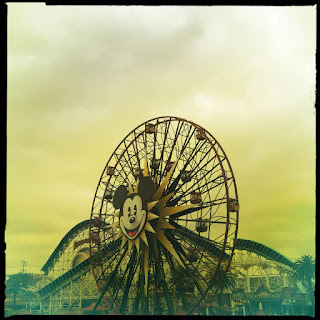 Well friends, be still my beating heart, DCA is totally amazing.  As it turns out the bad reputation of this park is similar to that of the Chester and Hester area of Animal Kingdom...by which I mean, the average person does not UNDERSTAND the theming. Just as with that much maligned area of Animal Kingdom, we love DCA.
We understand fully that this park has almost finished its billion dollar / multi year refurbishment, and that we were seeing a much more put together park that surely wouldn't garner the bad reputation that the original layout did.   If the objective was to change peoples opinion and increase park attendance, then at least someone near the top of Disney's proverbial totem pole is making the right decisions.   With the final additions of Buena Vista Street and Cars Land, it will be hard to improve upon this (for all intents and purposes) new park. 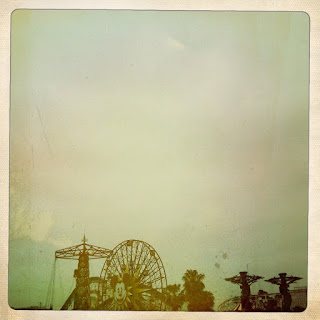 The Paradise Pier area of the park includes many wonderful touches...from the faux sand dunes underneath California Screamin to the fantastic over theming of the boardwalk games and shops, this area is remarkably fun and atmospheric.  (they even hire people to get drunk and stumble around, just like a real seaside amusement park!)
One of the greatest achievements in theming is The Golden Zephyr, an antiquated twirly spaceship attraction that we visited a few times.  Think Jules Verne meets Dumbo.    This attraction goes beyond a wonderful theme, it is period appropriate.  The zephyr is designed directly after the Captive Flying Machine of Pleasure Beach in Blackpool, England...built and operating since 1904!  In fact, The Golden Zephyr is the only substantial copy operating today. 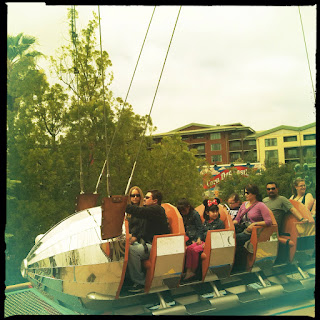 Hello strangers.  Sorry for using you picture....hope you enjoyed the zephyr.

Another example of phenomenal theming at DCA is the totally under rated and genius Bugs Land!  Now, while I understand that the Pixar film A Bug's Life isn't most peoples favorite Pixar movie, I for one have always really loved it.  Though the Tough To Be A Bug area is kind of uninspired, the real surprise of our DCA experience was Fliks Fun Fair, which is a small area of carnival style attractions that most people will tell you is for little kids.  Heck no!  This area can be enjoyed by everyone. 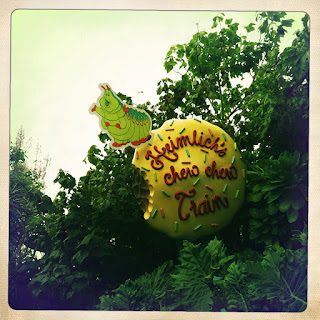 The stand out attraction in this area is Heimlich's Chew Chew Train featuring the rotund caterpillar from the movie.  Guests sit in Heimlich's body as he ravenously eats his way through "sweets and treats" all whilst describing them in a way only he can.  The visuals are supplemented by Disney's legendary Smellizers.  Now, we usually do NOT endorse the heavy use of irony or sarcasm on this blog (contrary to popular belief) but we can see how folks could enjoy this attraction for all the wrong reasons, but don't let that sully your impression of this fantastic ride.  Take it for what it is.  STINKING ADORABLE. 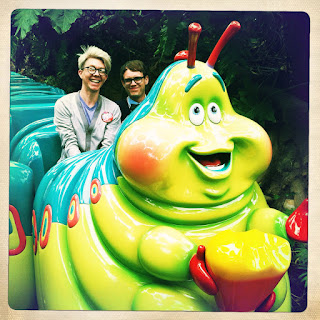 Everyone knows I have a giant candy corn tattoo on my arm, right? 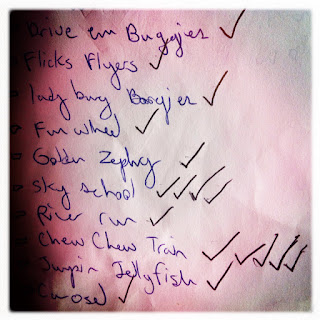 this is a page from our "attraction to do book," with lots of Heimlich love.

The fact that areas like Paradise Pier and Bugs Land can successfully coexist in the same park is a testament to good theming.  Points are definitely added for the shear AMOUNT of attractions in this park, setting it automatically above Hollywood Studios.  When you throw in the other smaller sections of the park (Pacific Wharf, Grizzly Peak,) the park is fleshed out nicely and is not only a full day park, but we felt that most people would need a few days to fully appreciate everything it has to offer.
There are intrinsic problems with the park, for sure.  The Condor Flats area, home of Soarin, is totally uninspired and pretty lame.  (redeeming factor: Minnie's Fly Girls, who are quite amazing.)  Even some of the attractions at Paradise Pier are really out of place. (more on that later this week.)
What we thought would be a throw away park ended up being a huge highlight of our trip.  We found ourselves visiting DCA every day of our 6 day trip.  We enjoyed every aspect of the park from extensive theming to the simple kiddie attractions.  So, next time you're in California don't make the mistake that a lot of folks do and brush off DCA as a second rate park.  It is totally worth your time.