It is a sad day around here. The perennial underdog of Fantasyland, Snow White's Scary Adventure is closing.  Though the rope has yet to drop, and the day has yet to begin, it appears that this attraction will shutter with little fanfare.
There are no "Toad Ins" ala Mr. Toad's Wild Ride, no Facebook page to "Save Snow," even Twitter is relatively calm about this one. (and people on twitter get upset about EVERYTHING.)  But, I'm here to officially state that I am extremely heartbroken and upset.  I'm sure I'll carry this sense of ennui with me every time I walk past that corner of the Magic Kingdom.  This is not out of shear love for the attraction, but for a few reasons.
First of all, this will leave Fantasyland with TWO dark rides! Where did our Fantasyland go wrong? Disneyland has five...each better than the last!  (plus, Winnie The Pooh in Critter Country.)  I know that the little mermaid attraction is opening later in the year, but still.  I don't think the valuable "castle interior space" should be taken up by anything other than dark rides.  The logic here is so simple, yet imagineers have never made this work.  Why is Sleeping Beauty Castle SO SMALL and manages to hold FIVE dark rides, and Cinderella Castle is gigantic and only holds two?  Really...this just doesn't make sense.
Then of course, there is the nostalgia factor.  Though my love and obsession for Disney Parks is as big as they get, I'm still relatively new to the game. (first trip as an adult was 2006.) Because my fandom has grown in a relatively quiet time for the parks, the closing of Snow Whites Scary Adventure will be the first considerable closure for me. I can't even fathom my park experience without seeing the evil queen change from beautiful to an old hag in the mirror...or Dopey waving goodbye to me, or even those logs that look like alligators.  I'm going to miss the ride vehicles, and how they always hurt my bottom. (I always wanted to get the Sneezy car."
I'm going to miss a lot of things about this attraction. I could keep going, but for the sake of my teary eyes I need to stop.   I'm jealous of everybody down there, able to ride one more time.  If anyone wants to send me photos via twitter, that would be awesome.
Goodbye Snow. :( 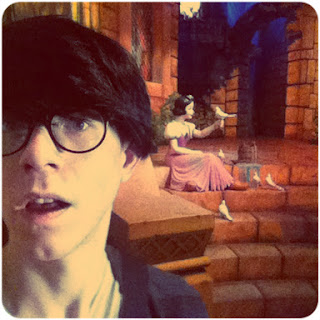