It had been a glorious five years worth of anticipation, but we finally made it out to Disneyland.  Our emotions upon entering the resort were a mixed bag of crying (me mostly) and giggling (adam mostly).  We felt conflicting feelings that included, but was not limited to, extreme guilt.  Were we betraying our beloved project future that is Walt Disney World?  Yes...and no. 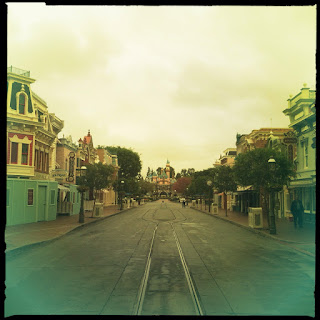 Years worth of listening to Disneyland podcasts, looking at pictures, and listening to back ground music could not prepare me for the initial shock that is Disneyland.  The weather is different (i.e., better) the atmosphere is cozy/small, the food is terrific.  You want to know something else?  The people are much nicer.   Thats right people at Disneyland have a much more laid back, chit chatty, saunter around the park attitude that I really appreciate.  And that leads us to:

MYTH NUMBER ONE: Disneyland is mostly locals.
I'm going to have to say TRUE.  We met several locals (both on purpose, and accident) throughout the week.  They loved to find out where we were visiting from and a little bit about us, and mostly they were just pleasant human beings.   I'm not saying its the 70% locals that we've heard about for so long...I really doubt its that many, but still significantly more than WDW. 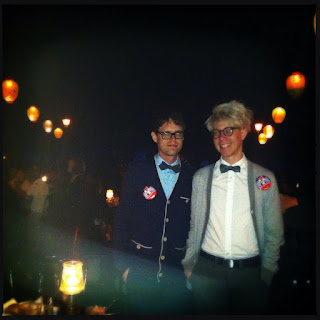 Sure, my hair looks nuts...but at least I'm wearing shoes.

MYTH NUMBER TWO: People at Disneyland Dress Much, Much Better.
What, I shouldn't be wearing crocs and a wife beater to the parks?  But these are my NICE uggs! Oh, maybe I'll wear a pink velour jumpsuit that says "Juicy" on my ass!
We have never heard this before, but we would like to official state that: People in Disneyland have much better (i.e. our own) personal aesthetics.   We were happy to not be the only folks wearing bow ties...or the only people wearing shoes for that matter.  In addition to dressing nicely, there were also a fair share of folks dressed in period costume which we also appreciate greatly.
Let me mention, for the sake of not getting hate mail, that it is 100% ok to slum around sometimes...I wear flip flops sometimes (despite the fact that my toes are rather ugly), but PLEASE folks try to at least look decent when touring Disney parks!  It makes us all feel better about the world...plus, you'll look better in photos. 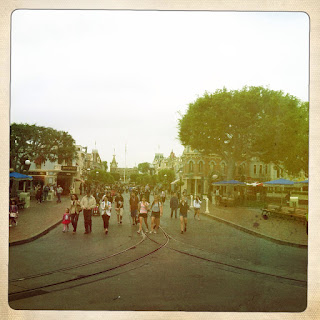 MYTH NUMBER THREE: Disneyland Is Cleaner Than The Magic Kingdom.
I'm going to give this one a big FALSE.  This is a rumor that i've heard perpetuated on several podcasts and websites that otherwise have wonderful reportage...but I really disagree with this.  Yes, Disneyland is very clean, but it is also very small.  I think that makes sense, yeah?  It is a smaller park, so yes, technically there is LESS garbage...but I really don't think it is any cleaner.  I felt at times that perhaps the opposite is true. 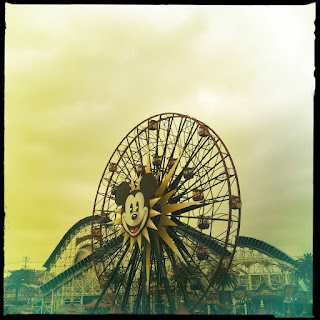 MYTH NUMBER FOUR: Disney California Adventure Kinda Sucks.
Nope.  I don't care what logic you use, this park is awesome.  I do realize that I'm writing this well into the billion dollar referb of the entire park, so it is not really the same DCA that earned the bad rap.  But compare this park to its Florida cousin Hollywood Studios, and you have a far superior park in DCA. Our favorite surprise attraction of the trip was Heimlichs Chew Chew Train which can best be described as the Gran Fiesta Tour of the Disneyland resort.
The theming was terrific in all areas of the park, including the wonderful Paradise Pier. (big problem alert: please get rid of Jumping Jellyfish...as it really ruins the atmosphere of that area.)  Bugs Land is charming and quaint.  Even the "backlot type" area was better than the studios counterpart, with wider streets easier to navigate.   The most beautiful theming of the original areas was that surrounding Grizzly River Run, which we spent a lot of time in as Grand Californian guests. 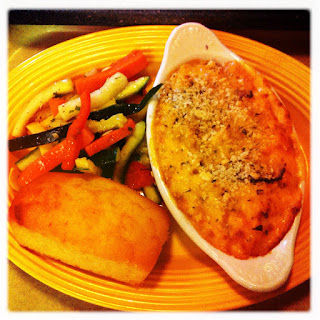 This is from a counter service restaurant!!!!! Its on a REAL plate!!!

MYTH NUMBER FIVE: The Food Is Better At Disneyland.
TRUE: The food is better at Disneyland. Much, much, much, much better. Doesn't even compare on the slightest of levels.  The variety of counter service options alone is enough to shame Walt Disney World.
Yes, I know, Epcot is awesome.  Eating and drinking around the world is great...but come on WDW, please step it up.  K?  Please look at menus online if you don't believe me.  The options at Disneyland are tremendous in comparison to WDW.  We only ate ONE veggie burger the entire trip, as opposed to the usual five or six.  :)

So, there you have it.  A couple of our thoughts on Disneyland myths that we have heard throughout the years.  I'm sure that people have other opinions about this...otherwise we might not have heard these rumors.  Let us know what you think!   More Disneyland goodness on the way this week....
Posted by Adam and Andrew at Monday, May 07, 2012