Welcome to another long overdue edition of Animation Appreciation.  In this series we discuss aesthetics of classic and sometimes forgotten Disney short cartoons.
Today we're taking a closer look at the stylized wonder of Pigs Is Pigs. Produced by Disney in 1954 and directed by Disney vet Jack Kinney, this film fits very strangely into the jigsaw puzzle of classic shorts. 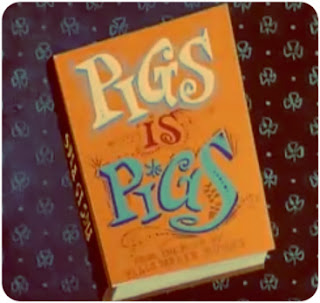 opening of Pigs Is Pigs...

more after the jump...
As the director of many Disney 'package' films of the 1940's (Make Mine Music, Three Caballeros...) Jack Kinney was not unfamiliar with highly stylized animation.  The trippy scenes from The Three Caballeros alone is enough to make an art historian squeal with delight. (I know, cause I squeal every time I watch that movie.)  Not to mention the awesome minimalism of the All The Cats Join In segment of Make Mine Music...all syncopated in musical harmony. 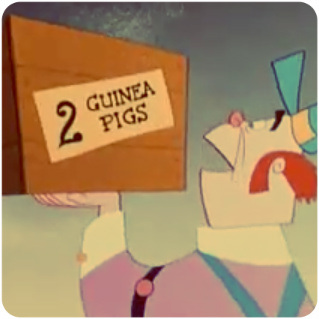 The story itself is simple enough.  Two guinea pigs are delivered to a train station where, upon not going home with the rightful owner, begin to breed at an extraordinary rate.  The "pigs" quickly over run the station, and the good hearted (if somewhat bumbling) station manager's life.   The story was based on the famous short story by American author Ellis Parker Butler. 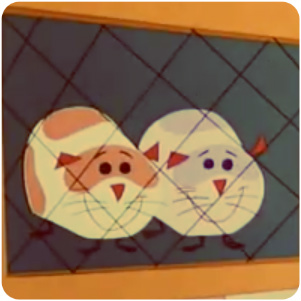 The sharp lines and bright colors recall Mary Blair, who no doubt influenced the look of the film, seeing as she and Kinney had worked together before.  The thing is, that this film almost looks more Mary Blair than anything that was ever turned into a full length.  There lays the beauty of the short films.  They are allowed to push the boundary of style. Is this crazy, mind blowing stylization?  No, to be sure.  Is it aesthetically pleasing, and holding up after 55 years? Absolutely, and in a way few other short films from the 1950's do. 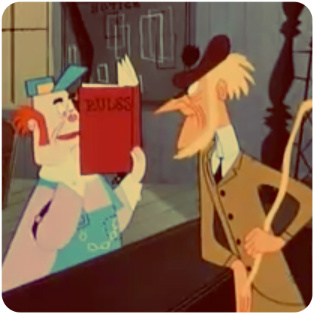 In addition to the wonderfully quick paced plot, the element of whimsy is enhanced by the wonderful sort of Irish jig melody weaved throughout.  This is supplemented and enhanced by the Mellomen's wonderful singing. (Mellomen being Thurl Ravenscroft's group...) This really helps the short to chug along without becoming frantic, which tends to be a problem for some directors.  Lots to say, and only ten minutes to do it.

So it turns out that Jack Kinney directed some of my favorite Disney material from the 40's and 50's, of which I was oblivious.  I'm glad I randomly stumbled upon this little gem.  If I'd watched it unprepared, I would have bet money that it was made in the last ten years, recalling the Rhapsody In Blue segment of Fantasia 2000.   Also, the elephants at the end make me pretty stinking happy.
Posted by Adam and Andrew at Tuesday, May 29, 2012