A Symposium on Popular Songs

For the last few weeks I've been mildly obsessed with Donald Duck and his relations.  As of late, the obsession has fallen upon Ludwig Von Drake.  As a nutty lecturer and expert on all things useful, Ludwig actually comes off as the most real of the duck clan. (as crazy as that sounds.)  I could see him being someones actual uncle.
A 1962 episode of The Wonderful World of Color finds Ludwig discussing music of the early 20th century and the importance he played in it.  A Symposium on Popular Songs includes Paul Frees at his bumbling best (he would voice Von Drake until the mid eighties), a wonderful musical score by in house great Tutti Camarata, and of course a smattering of Sherman brothers songs. 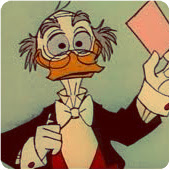 The animation here is top notch, especially for a short film, Ludwig's constant over the top gesticulation must have been a challenge...but it works wonderfully.   What really sets this cartoon apart from others at the time is the strange use of stop motion animation.  Songs like Rutabaga Rag are of particular interest.  (this number involves dancing onions...)  These segments show a similarity to stop motion juggernauts Rankin-Bass, to the point where I had to double check that it wasn't them.  (they still had a few years to go...)  As it goes, it was primarily the work of director Bill Justice and perennial handyman X. Attencio. 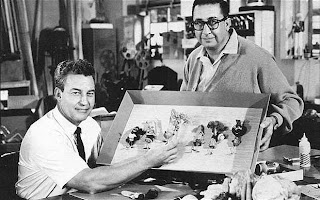 This short is driven by a terrific variety of Sherman brothers songs, displaying their knack for composition regardless of style.  Rag time, charleston, crooning, and rock all make wonderful canvases for the Sherman's kooky-silly lyrics.  And they are silly.  These songs may not be considered classic Disney songs by any stretch of the imagination, but it does fill the canon of the songbook nicely, further padding our obsession with niche corners of the Disney realm.  Furthermore, I don't think a more serious song like Feed The Birds, Castaway, or even Its a Small World would fit in a silly short like this.

So friends, here it is.  Enjoy:

I was new to this short until yesterday...but boy am I glad I found it!  Turns out that Ludwig has stared in a few of these weird little symposiums, and I'm totally excited to watch the rest of them!  Also, I was happy to find out that Bill Justice and X. Atenccio also did the phenomenal stop animation opening of The Parent Trap...which I've always loved.
Did you enjoy A Symposium on Popular Songs? Let us know on twitter: @Disneyhipsters