I'm always astounded by the lengths the animators and story developers would travel in designing a character.  The Disney difference has always (in my mind) been the desire for perfection.  Walt would settle for nothing less.
This is never more evident than the studio's first feature Snow White and the Seven Dwarfs.  The idea for the project had been mulling in Walt's head for years before the initial concepts started to appear.  By the time 1934 rolled around...and artwork began to appear, Walt already had a pretty good idea of what he wanted to achieve. 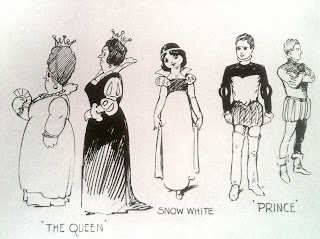 The original ideas floated about include a frumpy blathering queen and while fun, Walt knew that this character would have to drive the story as equally as Snow herself.   She evolved into the stoic hard lined bad ass that we all love today.  Funny thing about the above drawing is how much BETTER I think the prince looks. I love those little puffy shorts! 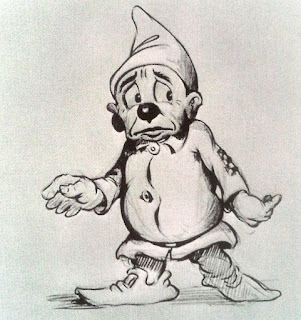 The dwarfs had their fair share of transformation as well.  Though they always had (somewhat) similar names and personality traits, their physical appearance was much more homogenized.  Again, we're all thankful that this changed.  Without a way to differentiate between the seven dwarfs we have no way to empathize with them.  One of the most driving, sincere, heart warming plot points is watching Grumpy slowly fall in love with Snow White.  Without his 'grumpy' visage this would probably be impossible.   Just another dwarf. 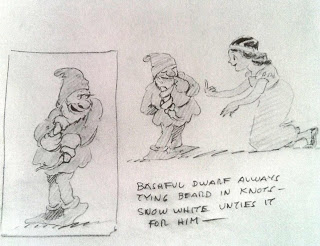 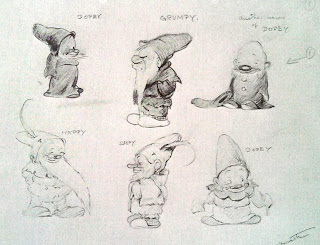 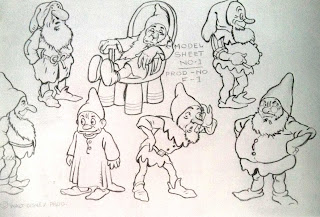 The fact is, without these lengthy development periods, feature length animation really could have been financially ruinous for the company.  So lets all spend our Tuesday thanking our lucky stars for the diligence of Walt and the creative folks he hired.
Posted by Adam and Andrew at Tuesday, April 10, 2012