Drinking Around the World...A Disney World Right of Passage.

As a Walt Disney World fanboy, who turned 21 just prior to becoming obsessed with Disney theme parks, I unfortunately missed the greatest Disney right of passage.  Say it out loud folks...drinking, around, the, world.
Young families new to WDW, and Epcot junkies alike will all agree in the magical whimsy of getting (gently) sauced while strolling the promenade of world showcase lagoon.  Whether you start with a margarita in Mexico, or a Labatt Blue beer in Canada...it all equals one thing, fun. 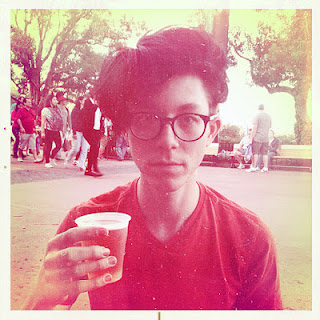 Baby beer during food and wine.  Yes, my hair is supposed to look like that...
more after the jump...
The problem with most people is that they tend to stick to drinks that they can get back home.  Yes, I understand the comfort of having "your drink" while on vacation. (I, for instance only drink Miller High Life, because I'm a dirtbag.)  But who on earth would order a Bud Light while walking around and enjoying the super amazing, magical atmosphere of Epcot?!??!!!
The most wonderful thing about world showcase is the readily available variety of food and drinks from their respective countries...eleven in all.   And though we're not saying you should have eleven alcoholic drinks in an evening (unless you really, REALLY wanna have fun) we do suggest trying all of the unique drinks that world showcase has to offer! (over time, of course.) 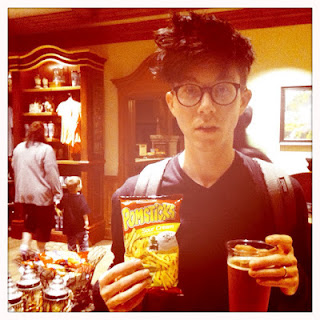 I promise you, its not a Bud Light.
In the sea of Disney drink carts, awash with Yuengling and frozen fruity faux fancy drinks, world showcase is an awesome safe haven...and here are some of the unique offerings from each country!

*Bonus hipster points: Get yourself a Tecate beer!

Norway:
At Kringla  or the beer cart:
Carlsberg beer! Though Beers and Ears  is quick to point out that Carlsberg is in fact Danish...and not Norwegian, this beer is still pretty awesome.  You can also strike up a fun conversation with the cute Norwegian boys selling it at the beer cart!

* Super Bonus hipster points: if someone can tell me what the heck Linie Aquavit Glacier is!?!?

China:
At the Joy of Tea stand:
Mango Gingerita - which magically involves vodka AND rum!  I love ginger, and I love mango...i'm all over this.
The tea stand, which sells a lot more alcohol than actual tea, has some of the most interesting cocktails in World Showcase....go try all of them! 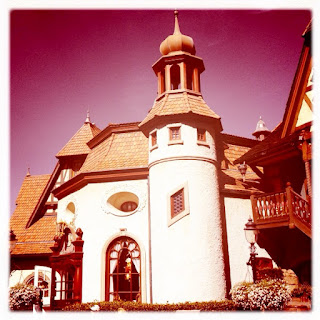 * Bonus: If you order a liter of any of them, cause that's pretty bad ass.

Italy:
At Tutto Italia:
Frizzante: Campari, Mandarin orange juice, and Prosecco.   Hello...sign me up.  Anything with Campari and I'm there....and this place features THREE cocktails with the bitter digestif! 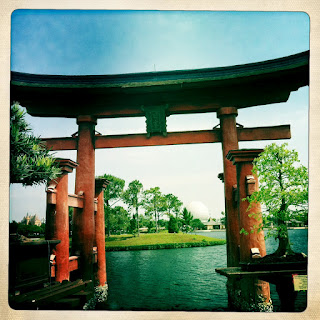 Japan:
Mitsukoshi Department Store:
This is a dreamland of delicious sake, and you can enjoy them with a charming host or hostess willing to tell you all about them!

* Don't forget to stop by the recently converted sake bar outside of the department store as well!  Super cute, and features even MORE sake...plus cocktails and beer!  (kirin is a personal favorite.)

Morocco:
At the Tangierine Cafe:
As much as I love the Tangierine Cafe, and the Moroccan pavilion in general, it actually doesn't have the widest selection of adult beverages.  One thing it does have is a wicked cute coffee bar, that features three fun alcoholic variations!  Add your choice of vanilla, hazelnut, or orange liquors!  Very fun, and it will give you an extra bit of energy to keep on truckin!

* Bonus hipster point:  Ask the sweet kids behind the bar which is their favorite drink, and let them pick it for you.

France:
Les Vins De France:
Sure, France is the land of good wine, and this outpost is named such.  But you know something?  I don't love wine, like, at all.  Instead imbibe in a GREY GOOSE SLUSHIE!  No, it isn't classy at all (stop pretending it is!!!!) but it does come in both a Grand Marnier and Citron versions!  Yay!

* Bonus hipster point:  Get yourself a kir royale, because you deserve some champagne now and then.  You get the bonus point if you are a little tipsy during Impressions of France, and cry a little because your so happy. 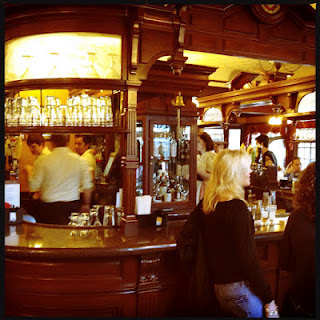 United Kingdom:
Rose and Crown Pub:
We're at the home stretch my friends...and though we're in the land of beers, at least they are really fun!  The Rose and Crown Pub is actually one of the most charming bars in Disney World.  Get yourself a fun "pub blend" like a black and tan or cider and black.   Dee-lish.

* Now that you're reasonable intoxicated, make sure you sit around long enough to catch The Hat Lady...who is actually a wonderful entertainer, worth your attention.

Canada:
Beer Cart:
This cocktail is just sliding by, on the basis of its name: Torontopolitan.  It involves vodka, chambord, orange and cranberry juice.  Not the most unique thing in the world...but at least it has its own little twist, and a name kitschy enough to do this blog justice.

* Don't overlook beer in Canada!  Both Moosehead and Labatt Blue are quite delicious!


Alright kiddos....you still standing up?  I hope you enjoyed that little rundown of drinks that ARE NOT Bud Light.  Next time you're in World Showcase make sure you give them a try, and enjoy a few snacks while you're at it!  :)