I'm in the middle of reading Donald Duck: 50 Years of Happy Frustration.  This book, published in 1984 for Donald's 50th birthday, recalls said ducks origins. There are a few wonderfully descriptive passages about Donald's dynamic moves. 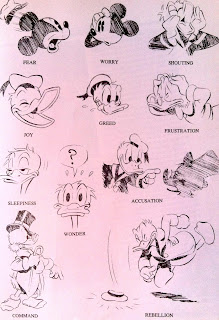 Donald is so amusing, and his transitions of feeling and movement so rapid, his audience is seldom aware what makes his antics so engaging.  Like all great entertainers, Donald relieves us of thought by substituting recognition, surprise or emotion. But an examination of his physical form, his personality and his character reveals the secrets behind the dazzling effect Donald produces.
With a combination of cuddliness and feistiness, ducks are inherently funny, and Donald is physically true to his species.  He has the duck's distinctive shape, quack and waddle.  With the exception of his hands he is more like a duck in body and behavior, than Mickey a mouse or Goofy a dog.  He also has the visually satisfying pear shape of his kind and is always drawn as one piece rather than two parts.  Animation tricks, such as keeping the leg well up into the body and showing the sag beneath, emphasize the sense of his weight.  He is short and squatty, yet highly flexible, as though made of some rubbery material.  And he has tangibility - he is a touchable duck - plus a resilience that allows him to be stretched, squeezed and twisted into truly fantastic postures. 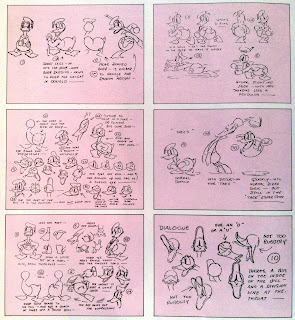 Said Jack Hannah, "You could rough him up and the next minute he was happy as the devil.  He changed THAT fast."  This capacity for exaggeration makes him the most active and versatile of all the Disney characters.  His fast and furious physical changes are an expression of his excitable nature.  His dynamism and invigorating qualities are transferred to the audience.  This combination of substance and mobility is gratifying to watch.  Donald is sensual but no sexual.
Disney himself summed it up.  "Donald's got a big mouth, big belligerent eyes, a twistable neck and a substantial backside that's highly flexable.  The Duck comes near being the animator's ideal subject.  He's got plasticity plus."
Posted by Adam and Andrew at Tuesday, April 17, 2012