One of the things us Disney Hipsters get most excited about during our trips to Disney World is food. We have both been Vegetarians since we were about 10 and therefore you would think eating in Disney parks and resorts would be rather challenging and lackluster. When I first visited the world about 10 years ago, veg options were few and far between. However, in the last 5 years Disney has made great attempts to include a greater and better variety of food suited for vegetarians, but that are also appealing to our omnivore friends. 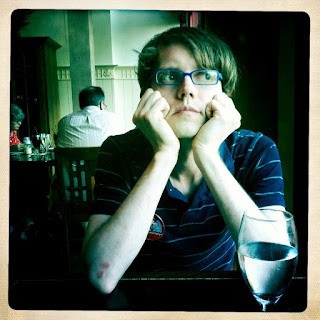 Patiently awaiting Gnocchi
More after the jump...
Over the years of reading Disney Blogs and info sites, I realized no one ever really compiled a good list of the fantastic dining locations for vegetarians. It seems that the folks that do occasionally write about it either don't like a variety of food or they don't have the obsession with exploration that we do.  The meals mentioned tend to be the obvious ones like some sort of veggie sandwich that is blah at best. In addition, the menus do tend to change (especially the table service restaurants) so I figured its about time someone put together a good lists of restaurants that have good veg options. The list is numbered, but its in no real order. So for our vegetarian and open minded friends this is for you.

I figured I'd start with the Magic Kingdom. I must confess that the table service in the MK is lacking, so we tend to stick to counter service is this park with one exception.

Veggie Tacos!
Although they aren't listed on the menu, you just need to ask for them. They basically just fill a taco shell with re-fried pinto beans and rice. After that you can fill them up at the fixings bar with cheese, salsa, lettuce and tomatoes. We'd probably eat here much more if we didn't love some of the choices listed below that much more.


They also have a Vegetarian Burrito on the menu, but we've never had it. I imagine its pretty good as well. 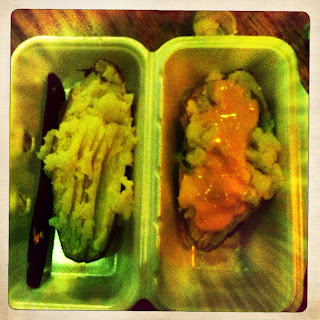 Does that Potato have cheese sauce on it??!?
At $3.29 and $1.99 respectively, this is the best meal deal in the Magic Kingdom. The potatoes are salt baked and served very plain with butter, sour cream and cheese. The sour cream is NOT VEGETARIAN, so ask them for extra butter instead. They are cooked perfectly. 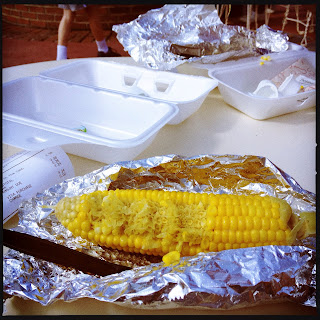 Cornnnnnnnn
The super sweet corn is also cooked perfectly and is served with just butter. This meal is perfect for us as we tend to try to eat smaller meals (so we have plenty of room to snack). You can easily take down a baked potato and head straight to Aloha Isle for a Dole Whip.

I've also read others complain that there are no toppings for the baked potatoes. Peco Bill is a 3 minute walk. Just sayin. 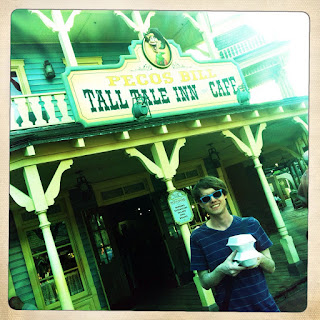 Why would we possibly carry those potatoes all the way over to Pecos Bill?
3. Liberty Tree Tavern (Lunch): Vegetarian Pot Pie 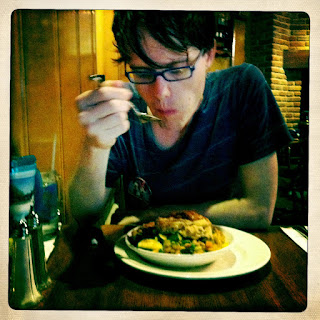 Adam eating said pie
This amazing pot pie is a bean ragout with sun-dried tomato pistou and seasonal vegetables topped with basil biscuits. This is the only table service that made the list mainly because the MK is lacking in that department. The restaurant itself is wonderfully themed to an 18th century New England home. While waiting for your food, take turns walking around the restaurant and check out the artwork. Follow your lunch with the Ooey Gooey Toffee Cake. Its a mini date cake covered in toffee sauce and ice cream. Its no Moto (don't miss it if you're ever in Brooklyn), but its very very good. 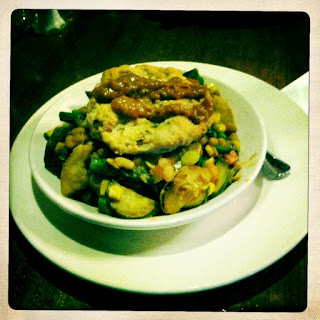 Probably the best and most original sandwich on Disney property!
This sandwich is a delightful concoction of hummus, broccoli slaw, and tomato on fantastically rough multigrain bread.  Though it usually comes with a side of Disney branded potato chips, you can substitute a side of steamed fresh broccoli.  This option allows you to have a splendid, relatively guilt free lunch. We often split the sandwich and a bowl of vegetarian chili.  The chili is filled with the usual vegetables and beans....but someone had the inspired idea to add mushrooms, corn, and olives.  Brilliant. 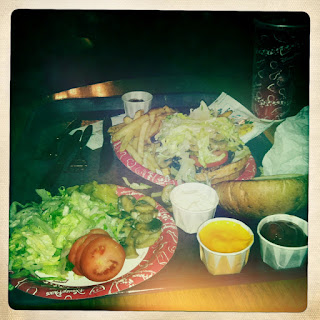 I know. Its just a veggie burger. This is actually the second version of a veggie burger patty Disney has offered and seems to be made of a mix of veggies, rice and soy. The original version was much more fake meat like and not nearly as good. You can get these all over the Disney Parks and Resorts...That being said, we're not spongin' for veggie burgers, its be fixings we're after. This burger is elevated to new heights when piled high with sauteed mushrooms and onions, pickles, lettuce, tomatoes and liquid cheese! They also have shredded cheddar, mustard, mayo, ketchup, various dressings. Bonus points if you grab some sweet and sour sauce from some other dining location (The Mara @ AK Lodge is my preferred location) and dip your fries in it. I just recommend placing them in a zip lock bag to prevent leakage.

Both Peco Bill's and Cosmic Rays have these. We prefer Pecos Bill for its superior aesthetic and themeing but at Cosmic Rays you can watch Sonny Eclipse while you eat which is a big plus. Either way, don't miss it!
Posted by Adam and Andrew at Tuesday, March 13, 2012