What Happened to Quasimodo?

It shocks me to find wonderful background and concept art come out of Disney, especially in a tepid animation period like the late 1990's.  Though I've grown to love some of the latter renaissance movies like Tarzan and Hurcules, (I like Hurcules a lot more than I ever thought possible) I have no built in appreciation for Hunchback of Notre Dame.
There is a great deal of terrific concept art for said hunchback, that I love on a very surface level.  The colors are muted, details abundant, and could potentially be the jumping off point for a wonderful (and timeless) story.  The animators had the opportunity to provide us with the most lavish telling of this story ever. But where is this movie?  The concept art truly was just that, a concept....one of many, I'm sure.  What we find on the screen is flat and lifeless despite the fact that they keep pushing topsy turvy in our faces.
Notable exceptions are some of the background art high above the city...even still, a watered down version of the original paintings. 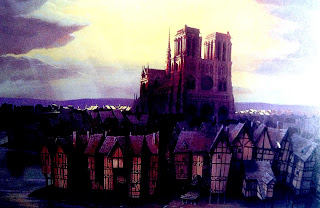 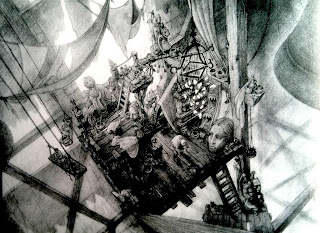 From The Art of Walt Disney, by Christopher Finch:

The Hunchback of Notre Dame is a film of immense ambition that sadly is diminished by patches of sloppy character animation.  The financial success of Beauty and the Beast, Aladdin, and The Lion King had crated enormous expectations of the part of audiences, distributors, product licensees, and Disney shareholders alike.  Everyone wanted to see at least on new animated feature a year, which placed tremendous pressure on the animation department. 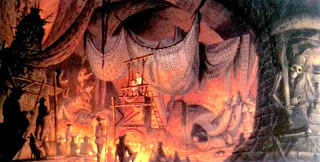