We Have Been Among Its Many Passengers...

This past weekend Adam and I took a short trip down to Washington DC, to imbibe in lots of art and food.  We spent a great deal of time searching out little Disney touches here and there, and were pleasantly surprised by all that we found.
In the National Portrait Gallery we thought all hope had been lost.  Focusing on 20th century figures, hoping to find even ONE Disney connection, we were coming up dry.  Then I noticed this fella... 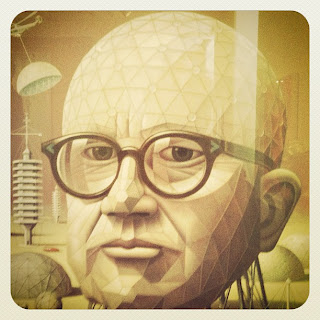 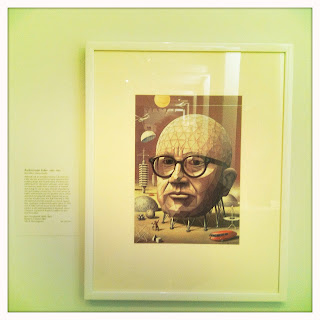 The description in the museum says:

"Although not an accredited architect, Buckminster Fuller was best know for his many experiments in building design and his philosophy in architecture.  Adhering to his "dymaxion" principal, which called for maximum results from a minimum of material and energy, he was an early advocate of prefabrication and modular construction.  The most famous of Fuller's achievements was the geodesic dome, which artist Boris Artzybasheff  wittily depicts here as the structure of Fuller's face and skull.  Patented in 1947, this spherical structure required no internal support, thus creating an unobstructed interior space.  In 1967 one of Fuller's domes served as the United States pavilion at the world exposition in Montreal, where it became a symbol of America's tradition in technical innovation." The geodesic sphere would, of course, go on to inspire Epcot's Spaceship Earth.  Fuller was brought on early in the design as a consultant on the project.  His idea that Earth in nothing more than a spaceship flying through space heavily influenced the end result of the attraction. 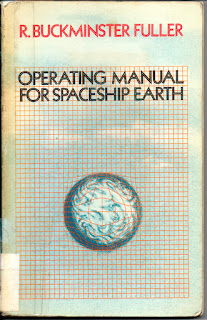 As one of the great visionaries of the 20th century, Buckminster Fuller was a great fit for Epcot.  Totally quirky, futuristic, and dry....really dry.  This guy practically screams Epcot Center.
Posted by Adam and Andrew at Tuesday, February 28, 2012